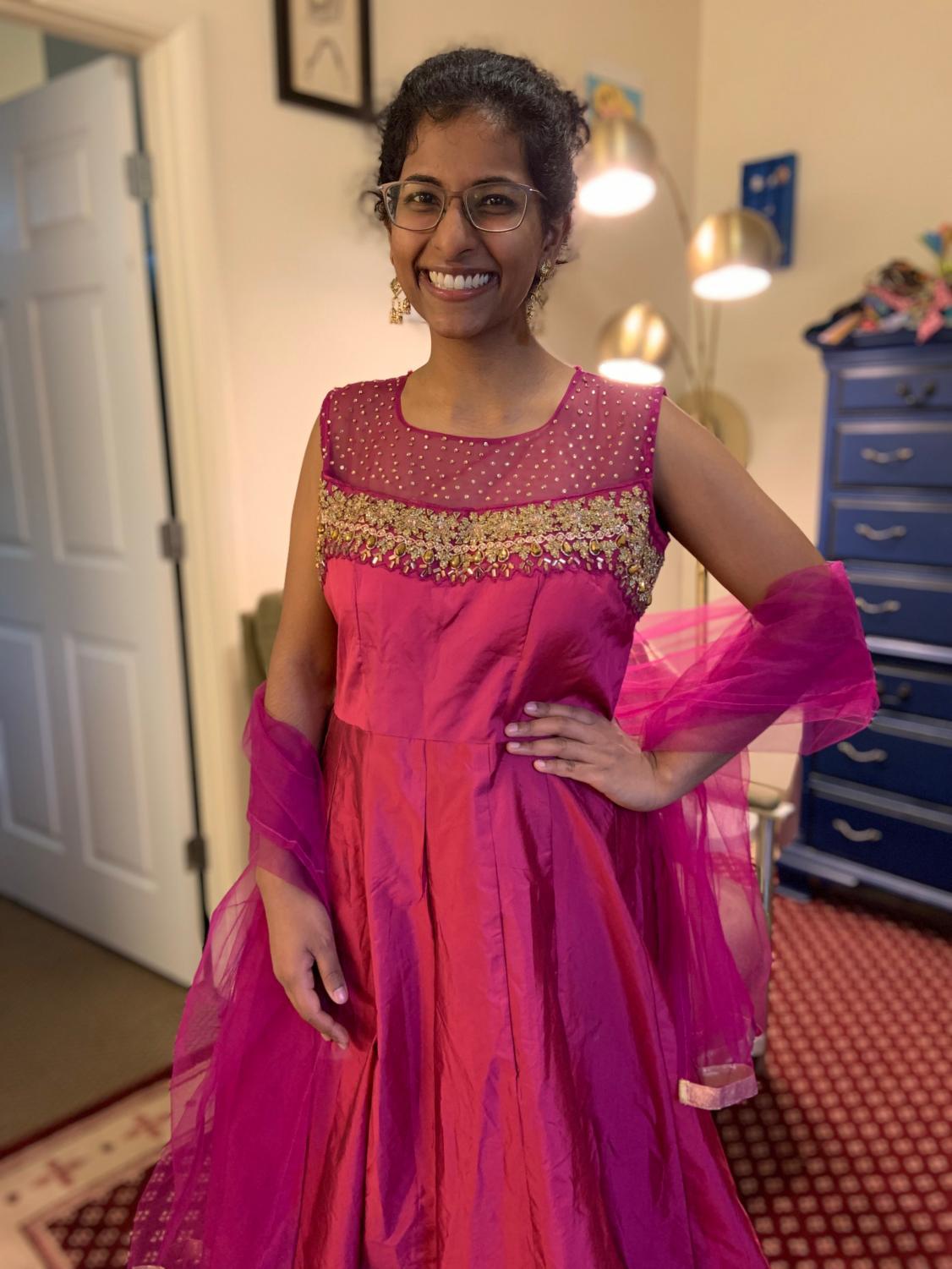 Anjana Murali enters the aftermath of a half-day of school at the Y Creator Space, a free, after-school STEM program at the Homewood YMCA. It’s a chilly Friday evening in February, and the six or so kids around fidget as they color or play on their phones. Murali’s worried the kids wouldn’t remember her — she hasn’t been to YCS in a couple months.

One tween in a yellow hoodie looks up when the YCS coordinator announces they have a visitor.

“Miss Anjana!” the girl shouts, running up and wrapping her arms around Murali’s waist.

Murali, a second-year student in Pitt School of Medicine, flashes her a kind smile and hugs back. She loves spending quality time with people, especially those involved in her many research and volunteer projects.

“People just center me in what I’m doing,” she said, “because if you have good relationships with people, you just get to build on so many things.”

Murali, a second-year in Pitt’s Physician Scientist Training Program and self-proclaimed people person, has been working with underserved populations throughout the City for several years. She's used her health training and steadfast dedication to better the physical and emotional health of others at the community level.

Her work with YCS began in 2018 as a Pitt undergrad when she received funding from HERlead, a women’s empowerment initiative that Murali was involved in during high school, to start a chess camp somewhere in Pittsburgh. Her mother, a teacher and a big influence in Murali’s life, instilled in her the idea that children’s education should be free.

In addition to teaching the fundamentals of the game, Murali helped YCS students with life skills, especially patience and strength. A former child chess champion herself, back in her home state of Wisconsin, Murali always viewed the game as a way to learn resilience. After facing boy after boy in chess tournaments, the lack of female representation in the chess arena had frustrated her.

“For them, a girl means nothing until she has a title,” Murali said. “So I wanted to equalize the playing field.”

She’s done about six or seven chess camps since 2013, many of them with all girls. Murali views chess as a metaphor for all kinds of obstacles, so she wanted to expand her programming to include more students from different backgrounds.

Murali’s desire to give back isn’t anything new. She received her psychology and anthropology undergraduate degrees from Pitt, which she said informed her of the importance of engaging with others.

It was also during these years that she’d spend time with friends in places like Shadyside and Squirrel Hill. Murali heard she should avoid the four “H neighborhoods” — Homewood, the Hill District, Hazelwood and Homestead. She said those familiar with Pittsburgh sometimes demonize and stereotype the inhabitants of these neighborhoods, but she finds these stereotypes to be largely unsubstantiated.

“Something kept gnawing away at the back of my mind, and I took more anthropology classes and was like, ‘There’s a reason people say that,’” Murali said. “Obviously there are human beings that live in those four H neighborhoods, what is there to see?”

When she received the HERlead funding in 2018, Murali wasn’t sure where she wanted to start her chess camp. She heard of YCS at about the time the Homewood YMCA went bankrupt and the program lost funding.

“I realized that one place I needed to be was Homewood,” she said.

So she asked YCS about starting a chess program. Despite their initial hesitation, YCS administrators suggested that Murali come in and give it a try.

Julia Beadnell, the YCS program coordinator, said Murali approached YCS with her own program ideas, and was impressed that Murali had figured out details like planning and funding. Beadnell said she never had to worry when “Miss Anjana” was present, and highlighted how well Murali worked with the kids at YCS.

Before Murali connected with the YCS students, she first had to get them interested in chess. But this did not come without difficulty — she said the kids didn’t know much about chess and didn’t really want to learn.

So she made a deal with them. If the YCS students let Murali teach them chess, they wanted to film a music video, post it to Youtube and have it go viral. The finished product, “Chess Do It,” has more than 2,500 views. Beadnell said the video turned out awesome, and that it’s come in handy for her and YCS.

By the end of chess camp, Murali was about to graduate from Pitt and start medical school.

Her love for science led her to pursue a job in the health care field and a determination to use her knowledge and skills to effect change at the community level.

“I realized when I practice medicine, I can only help the people coming to my clinic, which is going to be 10 to 20 people a day.” Murali said. “But there’s so much we can do in a population.”

Beadnell said Murali came back to YCS “sporadically,” but as often as she could. Murali missed working with the kids at YCS, though, so she decided to do another round of programming when summer rolled around.

Murali and her close friend and classmate Cat Pressimone, also a second-year student in PSTP, initiated another round of programming at YCS in summer 2019. Murali applied and received a grant from Roots and Shoots, part of the Jane Goodall Institute, in order to take the financial burden off the students.

The two visited the Homewood YMCA once a week to teach kids to cook food that was healthy and, hopefully, yummy. In the facility kitchen, Murali and Pressimone would work with the kids at YCS to make things like smoothies and sweet potato fries.

“[Anjana] was really good at trying to give the kids her full attention,” Pressimone said. “She just liked being there and being a person they could talk to and fool around with.”

Beadnell remembered one summer afternoon in the kitchen when Murali and Pressimone taught the kids how to make guacamole, a project the kids weren’t initially interested in taste-testing.

“To hear that they actually liked the guac was really exciting,” Beadnell said. “Even though they didn’t always like everything, a lot of them ended up trying it. That’s the biggest piece, that we want them to be willing to try different things.”

Pressimone emphasized the importance of exposing kids to healthy eating growing up. Not only is a healthy diet key to overall health, she said if kids are shown healthy options early on, they’re more likely to adopt those habits as they get older.

“It was just a way of making sure they got in an afternoon snack, because a lot of these kids come from lower-resource backgrounds,” Pressimone said. “This was a way to make sure that at least every Friday afternoon, there was something for them to eat.”

While young people of higher socioeconomic status can see underserved populations as a way to satisfy their own desire to make an impact, Murali asserted that these populations probably don’t rely on your volunteerism.

“These communities existed before you went in there,” she said. “They have tried to hang on and pull each other up as best as they can. Not to say they don’t need help, they do, but work with them to figure out where those inefficiencies are and help them there, because that will do more good than you starting something brand new.”

Pressimone said Murali has come up with most of the projects they’ve done together. The latest will be a year-long program the two will pilot at the Hill District location of Mother to Son, which provides trauma-informed care for moms and their sons. In addition to the twice-monthly meetings held at Mother to Son already, Pressimone and Murali will help moms learn and experience self-care with a year’s worth of funding they received from a Pittsburgh Schweitzer Fellowship.

Many women in the Hill District who come to Mother to Son are breadwinners with at least one young stomach to fill. Murali said these women often lack access to health resources for themselves, but serve pivotal roles in their communities.

“If you invest in the woman, make sure she’s in good health and she can do things to raise her kids to be strong, healthy and educated, you just changed a community right there,” Murali said.

In addition to teaching members health literacy, Pressimone said she thinks their program will inform the mothers and guardians on the value of self-care through activities, like making face scrubs, as opposed to instruction.

“It’s not going to be just teaching them about self-care necessarily as much as doing activities and hoping they’ll like them and adopt them in their lives,” she said.

Though they can’t currently visit Mother to Son in person because of COVID-19, Murali said she and Pressimone plan to communicate virtually with the mothers in the meantime and implement programming that way.

Murali’s experiences in Homewood and the Hill have taught her that she wants to work in adult health, with a focus on the community level, where she said the most change happens. She’s not sure of a specialization yet, but connecting with her patients always serves as one of her primary goals.

“Once you get invested in a community and start to become the fabric of the community,” she said, “all the sudden the world is so much brighter and friendlier and is, I think, a much [more] wonderful place to live in.”