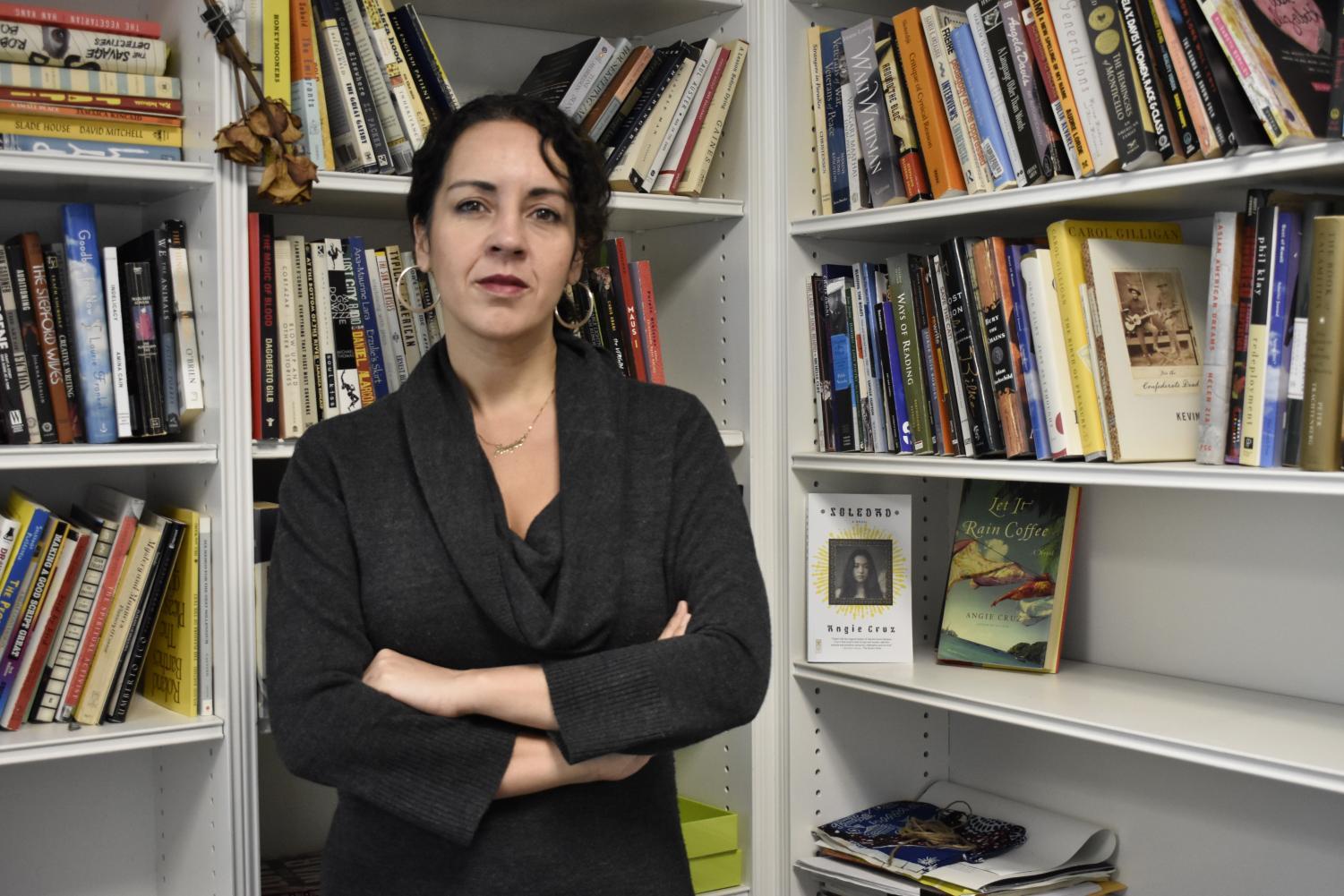 Angie Cruz’s education as a writer began during her childhood in New York City in the ’70s, listening to her grandmother weave together intricate stories in the kitchen.

“I think that when [she] would tell a story, her desire was to keep me there, so I would keep her company,” Cruz said.

The storytelling skills Cruz picked up from her grandmother are apparent in the way she relates this story, talking quickly but evenly in varied tones, sometimes using her hands for emphasis.

“Her stories got wilder and more interesting, and there were a lot of pivots, so I think I learned a lot from her,” she said.

Her grandmother was one of several influences Cruz had growing up that shaped her into the nationally acclaimed writer she is today, with a position as an associate professor of fiction writing at Pitt, a role as founder and editor-in-chief of literary journal Aster(ix) as well as three novels under her belt. Her most recent novel, “Dominicana,” has earned widespread critical acclaim from The New York Times and similar publications.

Cruz’s novels take place mostly in Washington Heights — the neighborhood in New York City where she grew up — and center around Latinx characters and their stories. For instance, “Dominicana” is the coming-of-age story of a young Dominican wife who immigrates to America in the 1960s.

It was another member of Cruz’s family who inspired the story for “Dominicana” — her mother who immigrated to America in the 1970s. She and Cruz’s father, also a Dominican immigrant, both worked while she was growing up. No one else in her family was a writer or any other sort of artist.

Cruz’s first novel “Soledad” largely reflects this — it centers around a young woman who leaves her family to pursue art, but eventually returns to “deal with” her neighborhood and her mother. Cruz described the main theme of the book as learning how to merge her artistic ambitions with her past.

“There’s all these different things that we do in our lives where we cross a border of a rule or a place … and then being forced to return, and sort of saying, ‘No, I am an artist and I can be in this space. I can be both,’” she said.

In many ways, Cruz said her first novel explores the dynamics of moving between a neighborhood where the population is primarily working-class Latinx and other neighborhoods separated by class and race. Moving between different places in New York became harder for her than the trips she took to visit the Dominican Republic when she was young.

“In a city like New York City, for me, it was easier to go to the Dominican Republic than it was to go downtown … because that was happening all the time — I went in and out of the Dominican Republic as a child and as a teenager — in a way that going downtown, it was like ‘oh, are you going to that place that we don’t go to?’ … The city is incredibly segregated, and to go outside of the neighborhood casted you as someone who has sold out.”

Cruz does not view representation as a goal or criteria of her writing. She simply writes stories about what she’s interested in, stories about people in her community.

“I try to keep away from an activist agenda, for fear of making the work didactic, or killing [the story] before it starts. I’m more interested in working through something, even though it might make me slightly uncomfortable, and seeing where it leads me,” she said. “I don’t want to work within my comfort zone.”

Cruz understands the impact and importance of seeing oneself represented in a work, however. She recalls walking past a Barnes and Noble in New York City as a young adult and seeing “How the Garcia Girls Lost Their Accents” by Julia Alvarez in the window. Cruz remembers being intensely interested in the book because Alvarez, the author, was also Dominican.

“It was the first book that I remember buying with my own money,” Cruz said.

This is an important memory for Cruz — despite her grandmother’s prowess as a storyteller, her family didn’t have a lot of books around the house while she was growing up. The only book she remembers having around was an encyclopedia.

“When you don’t grow up with the cultural capital of books, or family that can help you or bring you into the writing world — the art world — you need a lot of support or people who go out of their way to help you believe that that’s something you can do,” she said.

Luckily, Cruz became immersed in “the art world” during her adolescence in New York City, a place she described as a “training ground” for her eventual passion.

Initially interested in art, she studied visual arts at LaGuardia High School and had an opportunity to intern at the Metropolitan Museum of Art in New York City her junior year. She worked in the museum on Mondays when it used to be closed to the public, helping an archivist put away glass plate negatives. She describes the experience as vital to her growth as an artist.

“It was like a really sacred, spiritual time in the museum, because I would sit with works in the museum and fall in love with them,” she said. “It is rare, it’s rare to be in museums when no one else is there.”

After high school, Cruz pursued a degree in fashion at the Fashion Institute of Technology in New York City, going on to work in retail and fashion merchandising. After several years, though, she realized it wasn’t enough.

“I realized that … I wanted to do more. I wanted to change the world. I realized that fashion wasn’t the right career for me.” Cruz said. “I went to undergrad for the second time after FIT to get an education, a real education on social justice and the intersections I embody as a woman, as Dominican, as someone from the black diaspora,” she said.

Cruz enrolled in the State University of New York at Binghamton, searching for anything that would address black and Latinx issues. The classes she found eventually led her to major in English literature.

During her time at SUNY Binghamton, Cruz took a class on African American Literature with Carol Boyce-Davies, a leading authority on black women’s writing. Cruz recalls this class as the first time she was exposed to black authors and slave narratives, and that the landscapes of the books reminded her of the landscapes she saw during trips to the Dominican Republic growing up.

After Cruz completed her undergraduate degree at SUNY Binghamton, she earned her MFA from NYU. It was during this period of her life that she realized “Soledad” — which had been a work in progress for a while — was meant to be a novel. She finished writing it while she was in grad school, and found an agent shortly after she graduated. Cruz remembers feeling a mix of emotions upon publishing “Soledad.”

“That book actually came out the week of Sept. 11 in 2001. So the experience was a complicated mix of joy that my book was out in the world and also grief.”

After “Soledad” was published, Pitt offered her the opportunity to be a professor, and she accepted.

“I honestly was running out of money and needed a job with health benefits and stability, and as a writer, academia is a good option for that. I also love to teach,” she said. “I have not seen any program like Pitt and the amazing work it is doing, especially with [the Center for African American Poetry and Poetics].”

Cruz admits that she didn’t have a very positive experience in her own MFA program, and she looks at her own position as a professor in Pitt’s graduate program to make up for this. She sees it as an opportunity to act as a mentor for students and to help them develop their writing.

“To midwife books from an idea to publication is very exciting for me,” Cruz said.

Cruz takes a slightly different approach when she teaches her undergraduate students, knowing that a majority don’t want to become writers, but enjoy storytelling.

“If you're a good storyteller, you're able to make yourself — particularly women, who are often seen in mainstream narratives as a side character, the girlfriend, the wife — you can make yourself the protagonist,” Cruz said. “Even in the ways that you tell stories to yourself, you can recenter yourself as the protagonist. I think that's really useful as you move through the world, especially to feel empowered.”

Cruz continues her efforts to empower others through storytelling in her work at the literary journal Aster(ix). Cruz founded Aster(ix) with Adriana E. Ramírez back in 2013 after looking at that year’s VIDA Count — an annual tally that compares the number of women who are published in major literary journals to the number of men. Cruz describes the numbers as devastating, especially for women of color. With this in mind, Cruz and Ramírez created Aster(ix) as a space for women of color, their voices and their stories — though the journal doesn’t boast or brag about it.

“I feel like so many of the stories that matter to me are marginalized in the mainstream, so this is a way to create a space for them,” Cruz said.

While helping marginalized writers find their voice, Cruz also invests a great deal in teaching her students. Ramírez said she sees the care and attention that Cruz gives to Aster(ix) in her teaching and personal life as well.

“Angie brings people together, she really does,” Ramírez said. “Everyone in her life is better for knowing her. She connects people. She makes people apply for things they wouldn't normally have applied for. If you need a letter of recommendation at two o'clock in the morning for something that's at 9 a.m., Angie is the person who will come through for you.”

Cruz admits that with all of her other jobs and responsibilities, it can be challenging to find time to write. As years go by, life gets busier and busier. She amasses more students and more friends, and while she holds them within her own imagination, they also hold her within theirs and seek her out at different points in time. Irina Reyn, who teaches with Cruz in Pitt’s writing program, said Cruz’s dedication as an educator is exemplified through her relationship with students.

“She is always suggesting people students should meet or books students should read,” Reyn said. “Her energy and enthusiasm for literature is unflagging. People flock to work with her for very good reasons.”

Cruz’s brilliance shines through in all aspects of her work — her teaching, her work at Aster(ix) and her fiction writing. However, she said that as she explores and finds ways for her work to evolve, she is drawn back to her roots.

“I am interested [in] pushing at the edges of the genre … more and more I am leaning into where I first got my training as a storyteller, and that was in my grandmother's kitchen,” Cruz said.