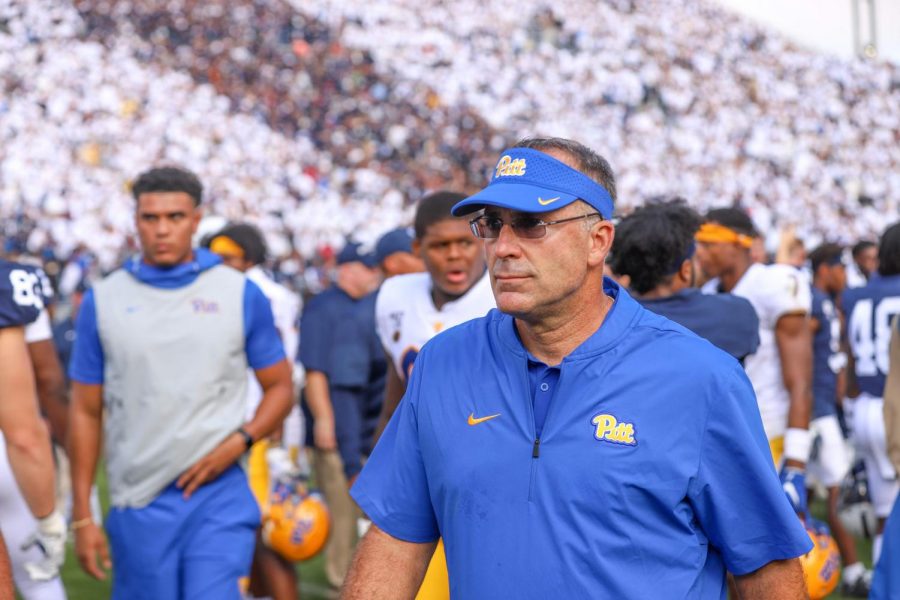 The COVID-19 pandemic has forced millions of employed Americans to adapt to work from home, and the realm of college sports is no different. Coaches face numerous unfamiliar tasks, which include keeping in touch with athletes, solving scheduling challenges and — above all else — virtual recruiting.

Pitt football has had some success recruiting in these unprecedented times. Head coach Pat Narduzzi received six commitments for the class of 2021 in the final eight days of April, and three players committed Sunday.

One of the biggest factors in the recent surge of commitments could be an enhanced focus on recruiting. In an April 10 Zoom call with local media, Narduzzi said the recruiting process has picked up pace during the pandemic. The present circumstances have taken away practices and in-person team events, and therefore placed more of an emphasis on recruiting, leading to more interaction between recruits and coaches.

“There’s more phone calls, FaceTimes with players than ever before, because I’ve got nothing else to do,” Narduzzi said.

Narduzzi declined to go into more detail on the specifics of his recruiting strategy, choosing to keep those strategies within his own program. But he did describe what Pitt has been doing as “cutting-edge,” and praised the job the recruiting office has done.

While much about the future is unknown, Narduzzi even said his staff has been playing video games with recruits to maximize interaction. The Pitt staff has been forced to come up with unique ways to connect with recruits, and given the quantity of recent commitments, these methods have been effective.

“We can continue to go this way. I’ve talked to kids all week really, last week, just about their strategy,” Narduzzi said. “Everybody’s strategy has to change. Our strategy in recruiting has changed.”

Those strategies paid dividends quickly with an initial surge of commitments on April 22 and 23, with the Panthers adding three players over those two days. One of these players is Terrence Rankl, a three-star offensive tackle from Massillon, Ohio.

Rankl joins a class that now sits at No. 22 in 247 Sports’ national 2021 team recruiting rankings and No. 5 in the ACC. While those rankings are likely to change over the next year of recruiting, Pitt’s class currently sits ahead of national powers like Oklahoma, Alabama and Auburn.

Rankl said he was lucky that he had already visited most schools with which he had mutual interest before the pandemic struck. After giving up the seventh most sacks and mustering only the 12th-best rushing attack in the conference last season, the offensive line has emerged as a position of need for Pitt, and recruiters were able to express their interest effectively during Rankl’s prior interactions with the staff.

“The pandemic really didn’t have an impact because I looked at all the schools that I wanted to go to and even schools that I was hoping to get offered by, but it seemed that they were already pursuing other [offensive linemen],” Rankl said. “I didn’t want to be anyone’s second best. Pitt was one of the few schools recruiting me who reciprocated that I was their number one priority at the top of their board.”

Since Rankl was able to visit campus and tour the football facilities, he got a sense for just how close he would be to an NFL organization. Pitt football shares the UPMC Rooney Sports Complex on the South Side with the Pittsburgh Steelers, an opportunity that intrigued Rankl.

“They are the only college team in the country that can say they literally practice right beside an NFL team, plus they eat from the same chef, which is very cool,” Rankl said.

Rankl also praised Pitt’s academic excellence and housing, the City and the support Pitt provides for its student-athletes. But what drove home his commitment were the similar attitudes he saw in his high school program and Pitt. He referenced how his high school, Massillon, was once a bonafide powerhouse, much like Pitt football once was in decades past.

In recent years, Rankl has played a huge role in his school’s rise back to prominence in high school football, sporting a 14-1 record in each of the past two seasons. He said he viewed Pitt as a place where he can play a similar role in a similar ascent.

“Pitt is just like my school, sort of an underdog on the rise … I want to go there to help get some championships,” Rankl said.

One week after Rankl’s announcement, Pitt received another commitment, this time from Texas quarterback Nate Yarnell.

Yarnell is ranked the No. 21 pro-style quarterback in the class of 2021 by 247 Sports, and brings both talent and depth at the most valued position in football. Coming from football-crazy Texas, his competitive spirit and high-level high school experience are expected to make for a fluid transition to college.

But Yarnell said he was unable to visit Pitt prior to the pandemic, instead relying solely on virtual tours and interactions.

“The pandemic made recruiting a different process,” Yarnell said. “I had to rely on phone calls and virtual things rather than being there in person, but at this time I feel we all have to adapt and do the best we can.”

Narduzzi and his staff were limited to virtual interactions with Yarnell, but they were still able to make a memorable impression. Yarnell said his relationship with the coaches helped drive his commitment.

“The main reason I committed to Pitt was the amazing coaching staff and the way they treated me and the culture around Pitt and the support for the program,” Yarnell said. “The top academics and history around the program showcased the greatness Pitt has to offer.”

Narduzzi and his staff are trying to convey a culture of success, and the screen in between them and recruits makes that much harder. Recruits can’t visit games or practices and stare at trophies that grace Pitt’s facility. So Narduzzi and his staff have to get that message across virtually and verbally, building connections despite distance.

He prefers to keep his methods quiet, but believes Pitt’s staff is on the cutting edge of pandemic recruiting.

“I won’t get into details of what we’re doing, or how we’re doing it, but I think we’re cutting-edge as far as maybe some of the things we’re doing,” Narduzzi said.