The Pitt News • May 19, 2020 • https://pittnews.com/article/157919/featured/oakland-businesses-working-to-chart-path-forward-in-yellow-phase/ 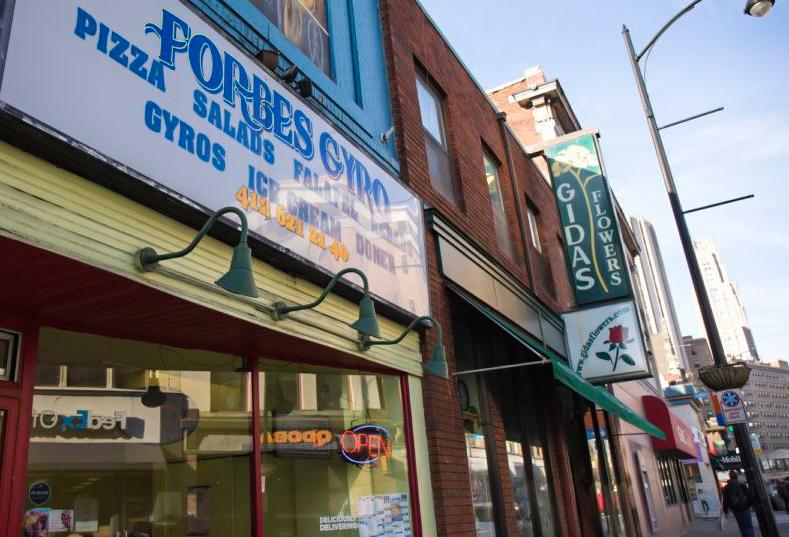 A lack of events due to COVID-19 has caused business to slow down at Gidas Flowers and many other businesses around Oakland.

Even before Gov. Tom Wolf issued a mid-March order for restaurants to close due to the COVID-19 pandemic, Khalil’s Restaurant on Baum Boulevard was practicing social distancing for its patrons.

“We were running around the restaurant like mad women, Cloroxing everything, and it was maddening. Every time [a] customer did anything — going to the bathroom, looking at a menu, opening the front door, running a credit card — we were right behind them with a Clorox bottle,” co-owner and 1992 Pitt communications and political science alumna Dalel Khalil said. “We sat customers at least 6 feet apart and refused customers when we felt customers were too close.”

Khalil’s closed its doors after the governor’s March 15 order to shut down dine-in services at restaurants and bars, and like other small businesses, faced obstacles while Allegheny County was in the red phase. The County’s May 15 move to the yellow phase of reopening has allowed businesses to start making decisions about what reopening will look like and how to overcome the economic damage done over the past few weeks.

Jason Gidas, the store manager at Gidas Flowers, said he is worried about the effect of the situation on small businesses, noting that the closure of The O is an example of what can happen in the worst case scenario.

“Because there’s no real timetable or guess as to how long this will go on for, it is very hard to plan or make important business decisions,” Gidas said. “I have a bad feeling that this will cause many businesses to just close permanently.”

Business at the flower shop has been much slower than usual considering the time of year, Gidas said. He added that springtime is usually the shop’s busiest season, but the lack of graduations, weddings and other events has seriously impacted sales. The retail portion of the business is not currently open, leaving the shop to rely on online and phone orders, which are followed by contactless deliveries.

Oakland restaurateurs, even with offering takeout and delivery, said they were not immune to the economic hurt caused by the pandemic.

Shorif Rahman, the president and CEO of Halal Pitt, said the food truck has been hit hard by the pandemic and the University’s move to online classes. He said the lack of foot traffic in Oakland has led to an 85% decrease in sales, and he has laid off six employees so far.

For Halal Pitt, the transition to the yellow phase has resulted in very few changes due to the continued absence of students and the general population in Oakland. Despite the pandemic, Halal Pitt is working on establishing a brick-and-mortar store at 412 Semple St., near Bates Street.

Lanie Chen, the owner of the Hunan Bar hot pot restaurant, said business has been downhill. While the Atwood Street shop has tried using delivery websites to drive orders, she said the transactions ended up not being as profitable since the delivery services take a cut from order totals and some tip money.

Chen said she is especially worried after seeing other businesses in the area for sale or closed permanently.

“We are just waiting to see and going one day at a time and hope that we can recover as soon as the students come back,” Chen said. “I think the phase is good and taking the steps to see how this pandemic is going.”

Joanne Chizmar, the owner of the Thirsty Scholar Bar and Grille, said while the restaurant’s revenue streams have gone to zero, the establishment does not face the same hardships that other Oakland businesses do.

“I think it is very sad what is going to happen to a lot of small businesses in the region that don’t have a means of curbing their overhead costs during this period of inactivity,” Chizmar said. “Since we own our property outright, we don’t have to try to negotiate a flexible option with our landlord, which helps a lot, but I feel most other businesses aren’t that lucky.”

The Thirsty Scholar Bar and Grille will remain closed until bars can reopen for service, Chizmar said. Even then, without a vaccine, Chizmar said she is worried about the difficulty of determining safety levels of staff and customers at the Fifth Avenue bar.

In spite of what Oakland businesses have faced over the past few weeks, restaurant owners said the transition to the yellow phase gave them hope and were beginning to form reopening and recovery plans.

Khalil’s is beginning to form a plan for reopening, starting with selling picnic gift baskets and shish kebab grill kits. During its closure, Khalil’s partnered with local nonprofit 412 Food Rescue’s Community Takeout program, where people can donate money to purchase takeout food from local restaurants, which is then donated to those in need.

Khalil said in the statement that small businesses are going to suffer, but it is important to not reopen the economy too soon and take precautions to protect owners and their customers.

“It is absolutely critical that we continue to take this virus seriously and not let our guards down prematurely or carelessly,” Khalil said. “It is important to reopen the economy — but not recklessly — rather carefully and smartly, or it will come back worse, and we will have to do this all over again.”