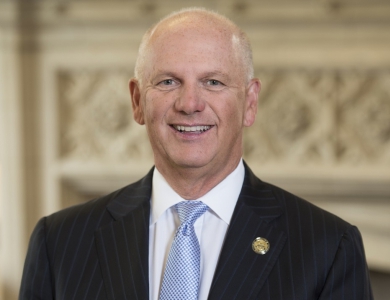 David Hickton, the founding director of Pitt’s Institute for Cyber Law, Policy and Security was selected to be staff director and senior counsel for the U.S. House Select Subcommittee on the Coronavirus Crisis.

A Pitt faculty member will soon have a voice at the national level of the COVID-19 relief oversight.

David Hickton, the founding director of Pitt’s Institute for Cyber Law, Policy and Security was selected to be staff director and senior counsel for the U.S. House Select Subcommittee on the Coronavirus Crisis. The bipartisan committee, which was created on April 23 by a vote, will oversee the use of funds supplied by Congress to aid the country during the COVID-19 pandemic.

The U.S. government has already allocated more than $2 trillion to fight COVID-19. Any future funds used will also be reviewed by the new committee.

According to the House’s website, the committee, led by Majority Whip James Clyburn, must determine “the efficiency, effectiveness, equity, and transparency of the use of taxpayer funds and relief programs to address the coronavirus crisis, including through Federal agencies, State and local government entities, financial institutions and other private businesses, contracts, grants, loans, loan guarantees, investments, cooperative agreements, or any other means.”

Hickton has worked in the past as the U.S. Attorney for the Western District of Pennsylvania and as a lawyer within the private sector.

In a press release, Hickton said this was a rare opportunity that couldn’t be passed up.

“I have watched and admired the principled leadership of Chairman Clyburn for many years,” Hickton said. “When he offered me the opportunity to help do this important work for the American people, I could not say no.”

Beth Schwanke, the executive director of Pitt Cyber, will lead the institute during Hickton’s absence. She has known Hickton since he founded the institute in 2017, and said Hickton’s new job is a difficult one, but his prior experiences have made him ready.

“He’s just incredibly dogged in the pursuit of what’s right and he doesn’t take no for an answer,” Schwanke said. “His past experience as an attorney means that he knows how to drive and push investigations and I think that all of his experience there will really serve him well.”

Michael Madison, a professor in Pitt’s School of Law and an institute senior scholar, said Hickton’s career has been leading up to this moment.

“David is a great guy,” Madison said. “His whole career has been a series of leadership positions.”

As a result of his appointment to the committee, Hickton will take a leave of absence from his position at Pitt.

Christopher Deluzio, the institute policy director, said Hickton’s new role is a difficult one, but he’s the right person for the job.

“His time as a U.S. attorney shows that he knows how to do this job,” Deluzio said. “Leading that office, they took on some really important cases and so that work highlighted the ability to take on major investigations with major consequences.”

Deluzio said he was confident that Hickton will be a useful asset to the committee.

“I think he will not only assemble a great team, but be able to lead the staff and the committee,” Deluzio said, “by making sure we’re spending public dollars and responding to this pandemic responsibly.”