The Pitt News • May 29, 2020 • https://pittnews.com/article/158035/featured/pitt-officials-optimistic-about-in-person-classes-deliver-recommendation-report-to-gallagher/ 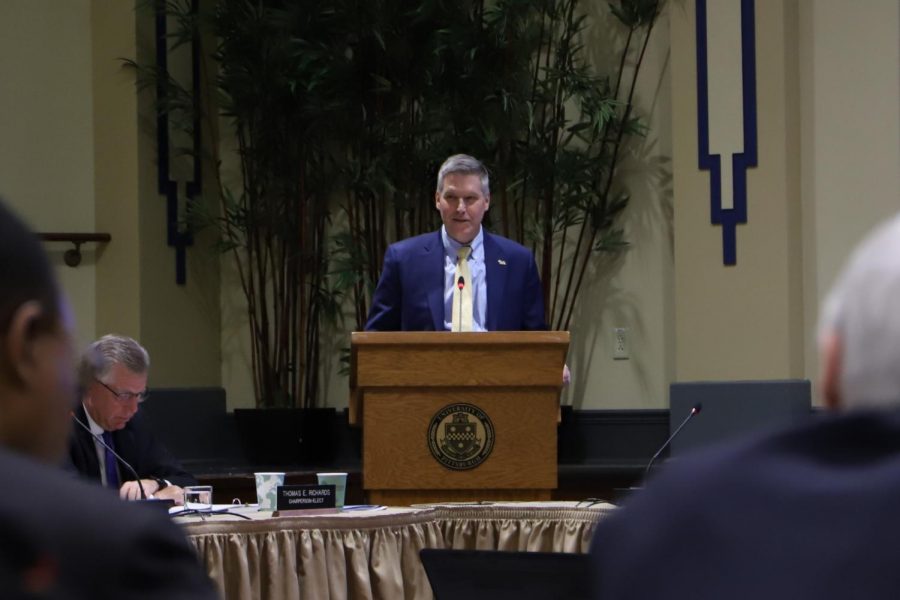 Chancellor Patrick Gallagher said Wednesday that Pitt will postpone Plan for Pitt 2025 in order to include strategies to strengthen racial equity justice on campus.

Chris Bonneau, the president of the University Senate, said he is confident the planning will allow the University to resume in-person instruction, if state and local regulations permit.

“There have been times I’ve been pessimistic over the last few weeks, but after last week, I’m relatively optimistic that we’ll be able to do this in a way that’s safe for everybody,” Bonneau, a political science professor, said. “Our students have signaled pretty clearly that they are interested in face to face instruction, and I think we’re going to be able to, barring unforeseen things.”

The Pitt task force planning fall semester classes and housing, of which Bonneau is a member, delivered a report to Chancellor Patrick Gallagher on Friday with recommendations based on about three different COVID-19 pandemic scenarios. Provost Ann Cudd co-chairs the task force with James Martin II, the U.S. Steel dean of the Swanson School of Engineering. The task force tailored recommendations based on about three different pandemic scenarios provided by Pitt’s Office of Public Safety and Emergency Management.

Bonneau said the task force is trying to plan around several different extenuating circumstances. These include whether Allegheny County remains in the green phase of reopening, and how well students and faculty maintain social distancing recommendations this summer to mitigate the spread of the virus.

Gov. Tom Wolf announced Friday that most counties in southwestern Pennsylvania, including Allegheny County, will move from the yellow to the green phrase on June 5, which allows their economies to further reopen with fewer restrictions.

“The governor has to put us in green before anything can happen,” Bonneau said. “Depending on how people behave this summer, all of this could be for naught.”

Cudd declined to comment on the specifics of the report, including the fate of in-person instruction, housing, semester length and extracurricular activities, but said the planning process has gone well.

“The work has been intense and incredibly productive,” Cudd said.

University spokesperson Kevin Zwick also declined to confirm or deny whether in-person classes are likely if Allegheny County remains in the green phase of reopening.

“The task forces have served to gather diverse ideas from across the university,” Zwick said. “Those ideas are now being shared with the Chancellor and the senior leadership team.”

In a Friday letter, the chancellor said the University continues to plan for a new “modified normal.” Gallagher plans to release an initial set of fall guidance in the next few weeks, with more complete instructions in early July.

“Our students can’t put their education and lives on hold, and our researchers and scholars can’t sit on the sidelines until the threat dissipates,” Gallagher said. “We must figure out how to forge ahead while also fulfilling a new responsibility to help control the spread of the virus and manage the risks it poses to our community and society.”

The task force also made recommendations for the fall semester’s length and schedule. Bonneau said while final decisions haven’t been made, he is confident that the semester length will remain the same at 15 weeks total with 14 weeks of instruction and 1 week of finals.

“In terms of the semester length, it will still be 15 weeks,” Bonneau said. “There aren’t going to be changes to basic structure. That would be too difficult with enrolling students and reassigning classes.”

But Bonneau said possibilities for other semester layouts are being considered. He said this might include shifting to online instruction after the Thanksgiving holiday, or starting the semester a week earlier.

“A lot of universities have come out and said they’re not bringing students back after Thanksgiving because they don’t want travel. It wouldn’t surprise me if we did something similar,” Bonneau said. “We could start a week earlier, but I don’t see how we’d start two or three weeks earlier.”

Bonneau added that regardless of the semester layout, even if classes are in person, Pitt must have some sort of remote component, in case of an outbreak.

“You still have to have some remote option or component for every class in case someone in the class gets sick or they have to self quarantine because they were around someone who was sick,” Bonneau said.

While in the classroom, Bonneau said the task force is considering how to enforce mandatory mask and social distancing rules. David DeJong, the acting senior vice chancellor for business and operations and vice chancellor for human resources, said last week that the University could update the Student Code of Conduct to include a guideline requiring students to wear a mask when and where the University asks.

“We don’t necessarily want to be heavy handed and start fining people, but we need to incentivise people to do the right thing,” Bonneau said. “We need by-in from all members of the campus community in order for this to have any chance of being successful.”

“I deeply appreciate any opportunity where I can help provide students’ perspective,” Macadangdang said. “It’s very promising that the University is taking steps to have a student voice in on the other conversation.”

Macadangdang added that many of his working group’s ideas were shaped based on responses to a survey that Kenyon Bonner, the vice provost and dean of students, sent to students asking for their opinions on maintaining a community.

“Those three questions that relate to belonging, community and safety have guided many of our discussions from the beginning,” Macadangdang said. “That was one way in which we wanted to garner more student feedback.”

“The working groups have been incorporating that feedback into their deliberations,” Bonneau said.” “Likewise, when I get feedback from faculty, I pass it on to the relevant people.”