The Pitt News • May 31, 2020 • https://pittnews.com/article/158042/top-stories/photos-downtown-protests-after-george-floyds-death/ 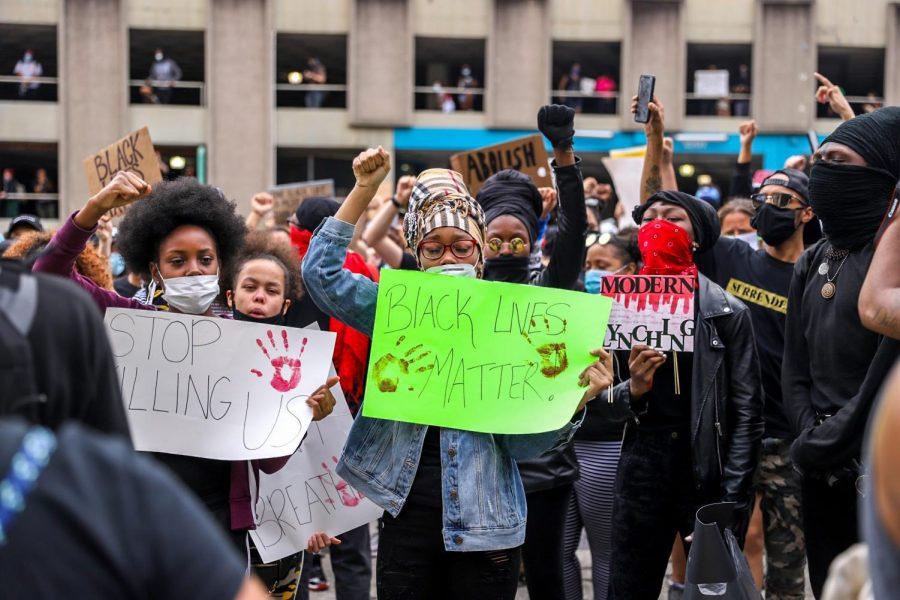 Protesters gather in Downtown Pittsburgh in response to the killing of George Floyd.

Protestors flooded into Downtown Pittsburgh on Saturday, as part of a nationwide movement, to protest the death of George Floyd, a black man who died Monday at the hands of Minneapolis police. White police officer Derek Chauvin, who has since been charged with murder and manslaughter, knelt on Floyd’s neck for eight minutes as Floyd said he couldn’t breathe.

Protestors marched through Downtown with chants of “No justice! No peace! No racist police,” “We can’t breathe,” “Abolish the police” and “Black Lives Matter.” They raised fists and signs in honor of Floyd, and speakers commented both on the beauty of coming together and the sadness of the circumstances that led to the gathering.

The Downtown protests were largely peaceful, though the gathering became “hjiacked,” as Mayor Bill Peduto described it, after several hours. Two City police vehicles were set ablaze, and some Downtown stores were looted, leading the Mayor to impose a 8:30 p.m. to 6 a.m. overnight curfew Saturday and Sunday in an effort to calm the City.