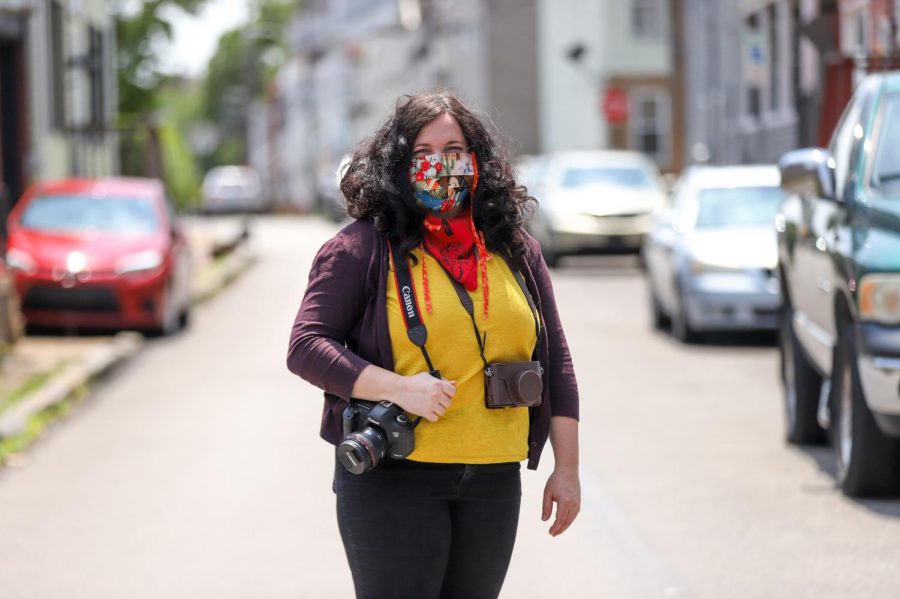 Ivette Spradlin, a professor of photography at Pitt and Carnegie Mellon University, has spent her quarantine taking portraits of Pittsburgers outside their family homes.

Ivette Spradlin’s Instagram page is filled to the brim with images of people in masks posed in front of colorful and creative-looking homes, their gaze fixed on the photographer who takes their picture from at least 6 feet away.

Spradlin — a professor of photography at Pitt and Carnegie Mellon University — has spent her quarantine taking portraits of Pittsburgers outside their family homes, masks and all.

The project started on a whim, Spradlin said. She often works in portraiture and said she was inspired by old photos of the Spanish flu pandemic of 1918.

“I’d seen these old photos from the Spanish flu of families with their masks on,” Spradlin said. “I was really inspired by that. A lot of my work, too, is recreating images.”

Spradlin — who lives in Pittsburgh’s Troy Hill neighborhood, located across the Allegheny River from the Strip District — began the project by posting on her neighborhood’s local Facebook group, asking if anyone wanted their photo taken. After she posted her first couple batches of photos, Spradlin said she attracted a lot of attention on Instagram from people who wanted her to visit their homes.

“My friend and collaborator Lenore Thomas — I went to go photograph her and then she found other people in her vicinity if they wanted to do it,” Spradlin said. “It just kind of took off from there.”

Thomas, a longtime friend of Spradlin and fellow Pitt studio arts professor, said she wasn’t surprised by Spradlin’s enthusiasm about the project. Thomas said when faced with the pandemic, Spradlin was eager to go make art, something she found trouble doing herself.

“I know, for Ivette, one of the things that works for her is taking portraits when she’s looking for something to do and that’s why that project came to her,” Thomas said. “I found for me, at least in the beginning, making art almost impossible. I don’t find making art in my house very well.”

Spradlin said she understood that it can be hard to make art nowadays, when it feels like the world is falling apart. She said no one should feel ashamed about taking downtime in their creative work because it’s a strange time to be doing anything at all.

“Everything’s so uncertain, this is all new to us, and you can’t know how you’re going to respond in a certain crisis,” Spradlin said. “It may help some people with their art but I would never want anyone to feel bad in a really hard time about not making work.”

Besides the masks, the most unusual elements in Spradlin’s photographs are the artistically decorated houses in the background. The majority of those photographed are themselves artists of some kind — members of Spradlin’s community of Instagram followers and neighbors who came upon her project and wanted to show support.

Lauren Braun, a fellow artist and friend of Spradlin from Pittsburgh’s Swisshelm Park neighborhood, located across the Monongahela River from the Waterfront, found out about Spradlin’s project over Instagram. In the photo featuring Braun, the outside wall of her porch is decorated with artisanal-looking suns and moons. Braun said these kinds of details stood out across all the photos, showcasing the many artists of Pittsburgh.

“I think it’s almost like a journal of her community,” Braun said. “A lot of the people are creative or artists and that comes through in the photos. In how they present themselves and what they’re homes look like, it’s an interesting portrait of a bigger moment in time that’s very strange.”

Spradlin said she understood why people would be eager to have their pictures taken — not only are many experiencing little in-person social interaction, but they also want this historic time documented for the future.

“I think everyone really realized that this is a unique historical period and they wanted to feel a part of it and have that documentation of it,” Spradlin said. “There were so many that asked me, so it ends up being kind of a record of a lot of artists in Pittsburgh.”

Spradlin said many of these artists, in the beginning of the pandemic, took this free time as a chance to get motivated and do more work, but many quickly realized that being an artist in quarantine wasn’t exactly what they expected.

“Everyone’s adrenaline was up and they were saying, ‘Let’s create! Now is our time to do this and that. Artists rise up!’” Spradlin said. “I think that’s a lot of unnecessary pressure because there’s a lot going on, it’s really hard, it’s a very traumatic time.”

Thomas said even if artists aren’t creating anything physical right now, they’re still developing their skills. She said, in her view, an inherent part of being an artist is that ideas are always brewing in the brain.

“If nothing else, I’ve learned that even if you’re not making, physically making, there’s something in an artist’s head that’s always happening,” Thomas said.

And the creative process is different for everyone, Braun said. Each person takes a different path back to creating art again after an extended break from creative work — it just depends on the individual.

“It’s a very personal response,” Braun said. “Whether you lean into making your work or you have to find new means of supporting yourself, or putting yourself on pause and not making work.”

Thomas, whose own process back to creating was slow going, said all artists reach a point where they bounce back, because art is something that they love.

“I do think at some point, if you’re a maker, you’re going to miss making and you’ll find a way back to it,” Thomas said.

Spradlin’s path back to creating was a quick one, channeled into a personal project reflecting the strangeness of the times. She said though there may always be some outlet for creative people to express themselves, now is not the time to insist on it.

“I think there’s always something to be photographed, but I think limitations can also be very useful to creative people,” Spradlin said. “But for this situation I also don’t think anyone should feel bad if they can’t work or create right now.”