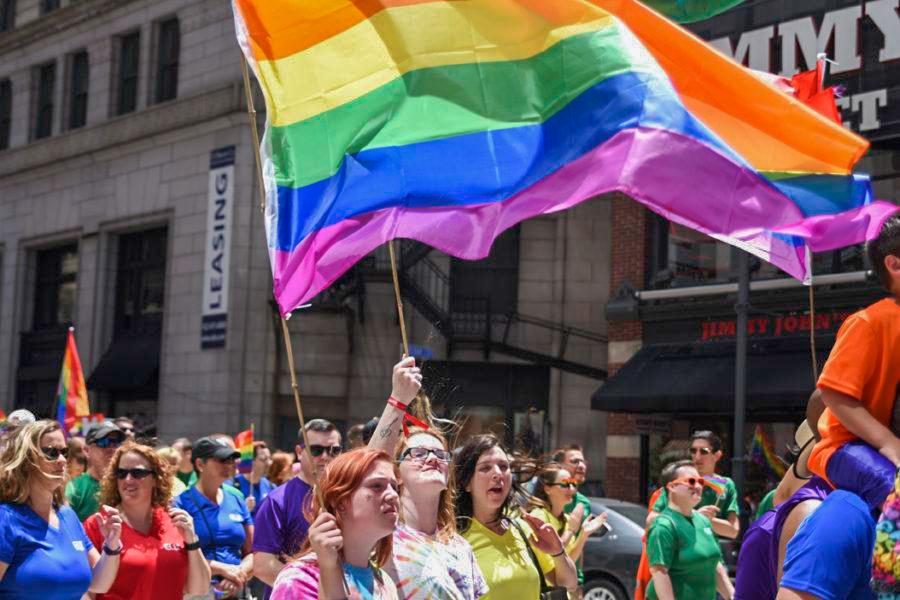 Major Pittsburgh Pride celebrations have been postponed due to the COVID-19 pandemic.

Pride Month looks like it will come and go without much in-person celebration this year, with major Pittsburgh Pride celebrations postponed due to the COVID-19 pandemic. Although the LGBTQ+ community and its allies can’t spend the month of June physically together, our staff has compiled a list of the shows and movies that help bring us closer to the community and the issues that matter.

Despite Netflix’s tragic cancellation of “Sense8” after two seasons –– with a hastily wrapped-up finale to boot –– the series is still one of the best LGBTQ+ shows to date. “Sense8” is produced, directed and written by the Wachowski sisters, the masterminds behind “The Matrix.” “Sense8” focuses on the lives of eight individuals across the world who discover they are “sensates,” a different species of human who are emotionally and mentally linked. Out of the eight principal  cast members, three portray members of the LGBTQ+ community. What “Sense8” does so well is utilize the telepathic/empathic bond between the “cluster” –– as the eight stars are known –– to tell a human story from perspectives left long untouched in Western film. Not every character is American, of the same social class or has the same cultural views. “Sense8” is about a group of people coming together not despite their differences, but because of them. Even with the number of  LGBTQ+ shows and movies on the rise, it’s hard to find one that has diverse representation in terms of race, gender identity and culture. “Sense8” is the best attempt that I’ve seen so far, and should be held up as a benchmark for where we should be going.

This French critical smash from writer and director Céline Sciamma deserves the praise it’s received. Limited to a principal cast of four women and the setting of a small, picturesque island, “Portrait” tells the story of Marianne (Noémie Merlant), an artist, and Héloïse (Adèle Haenel), her subject, as they begin to fall in love over a week on the island in 18th-century France. A very loose thematic adaptation of the story of Orpheus and Eurydice, it’s a gorgeous work, with a number of stunning sequences –– only two of which use music –– filled with love, regret and wonder. Distributed in North America by Neon –– the same distributor that released Bong Joon-ho’s acclaimed “Parasite” last year –– it’s another entry in what will hopefully be a long trend of increasing presence of foreign film in the United States. A massively interesting exploration of same-sex love in a period setting, imbued thoroughly with a real magic, the film is a true glory in the creation of a modern myth.

Hannah Gadsby’s comedy special has been called “a glorified TED Talk,” and maybe it is, but it’s such a good TED Talk — and a reminder that before Pride Month was a Mardi Gras lookalike, it was a riot. Gadsby starts by pointing out that the Pride flag is “a little busy,” and goes from there, “sprinkling in lesbian content.” Gadsby critically assesses what comedy looks and feels like as a lesbian, and asks what the joke is if she’s the punchline. She dissects a self-deprecating joke and adds tension, asking, “Do you understand what self-deprecation means when it comes from somebody who already exists in the margins? It’s not humility — it’s humiliation.”

Gadsby has a way of pulling all the air out of the room, so that when you laugh, it feels like the first breath you’ve taken in hours. And when you cry, which is inevitable and intentional, it feels cathartic, the first breath you’ve taken in days. She takes up space, hates Picasso and reminds us that it still isn’t safe to be a lesbian, which is — ostensibly — still the point of Pride Month.

“Feel Good” is a classic example of a well-done Netflix original that did not receive nearly enough attention after its March release. Maybe it’s because it is a British show, but either way, audiences across the Atlantic will adore this one. The six-episode season stars Mae Martin as herself, a Canadian comedian making her way in the UK stand-up scene. She meets George (Charlotte Ritchie) after one of Mae’s performances. As perspective switches between the two women, each character dramatically draws in a viewer, emphasizing the immediate connection between these two strangers.

Based somewhat on Martin’s life, it’s soon revealed that Mae’s homeless, floating from her friend’s couch to George’s double bed. The relationship evolves very fast as the two spend an extensive amount of time together, and the audience learns of some hurdles on both sides. Mae’s mother Linda (Lisa Kudrow) reveals that Mae’s a recovering addict, and later tells George that Mae never stays in the same place or with the same person for very long. George has only ever dated men, and Mae’s frustrated that George won’t introduce Mae to any of her friends as George’s girlfriend. The short but compelling episodes are striking in the way they do justice to addiction and LGBTQ+ issues in such a limited run time and explore the struggles that come with diving into an intense relationship.

Hosted by Victoria Cruz, a transgender woman and activist with New York’s Anti-Violence Project, this 2017 documentary investigates the 1992 death of Marsha P. Johnson. Johnson, also a transgender woman, was one of the leading voices in the Stonewall Riots of 1969, which many consider the inciting event for the gay rights movement in America. Johnson’s body was found in the Hudson River in 1992, and the police declared that her death was a suicide. As Cruz speaks with Johnson’s friends and family, she grows skeptical of the idea that the activist killed herself. The film explores police corruption, the implications of gay bars operating under mafia ownership — which was common in the 1960s — and the dangers that come with living as a transgender woman in America.

Most importantly, “The Life and Death of Marsha P. Johnson” shows some of the darker moments in LGBTQ+ history, including the years after Stonewall, during which the transgender women who fought for the rights of the community faced harassment from cisgender lesbians, gay men and bisexuals. The message holds weight today, as transgender people of color like Johnson and Tony McDade, who died in police custody last week, still face alarmingly high violence rates in the United States.