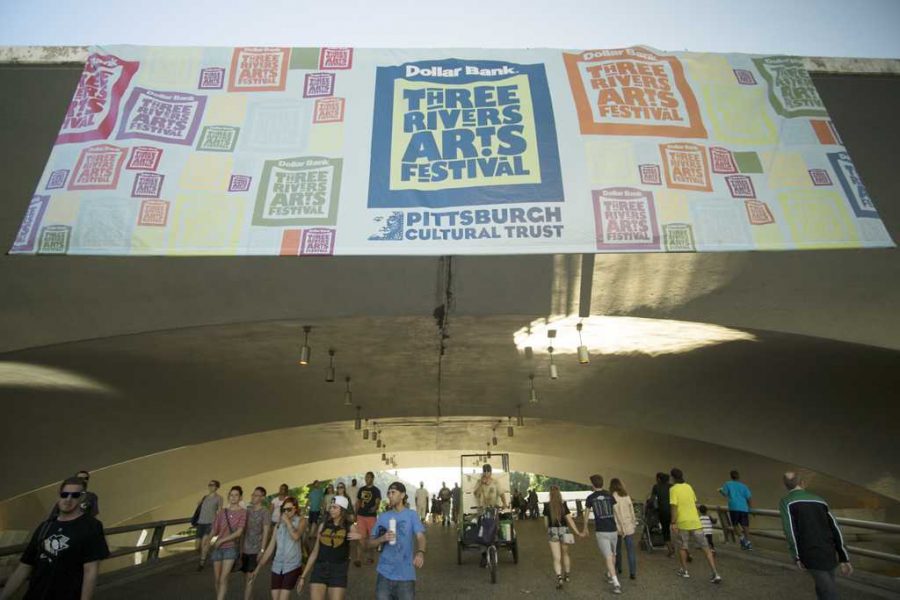 The Three Rivers Art Festival will occur entirely online due to the COVID-19 pandemic.

By Kaitlyn Nuebel, For The Pitt News

Now in its 61st year, the Three Rivers Arts Festival normally brings about 500,000 people to the Cultural District, Gateway Center and Point State Park. But this year’s festival looks a little different from what most Pittsburghers have seen in the past.

The festival, run by the Pittsburgh Cultural Trust, will occur entirely on the Trust’s website. Events and activities showcasing a variety of performers and artists from all over the country kicked off last Friday at noon and will run through June 14.

Sarah Aziz, the festival director, announced in an April 14 letter that the event would be online due to safety concerns over the COVID-19 pandemic. She said the Trust decided to carry out the event digitally, rather than cancel it altogether, as a way to support the artists involved.

“We felt like it was really important because the artists were already [chosen], they were already invited,” Aziz said. “A lot of the artists, especially in the artist market, make most of their living going around to all of these arts festivals and selling their fine arts and crafts.”

According to Aziz, she and a team of about 20 people spent all of April and May reimagining what the event could look like in a digital format. The team created an interactive website showcasing a digital artist market, a timeline of livestream performances, images of artwork selected for this year’s exhibits and other vital components of the Three Rivers Arts Festival.

The digital artist market showcases the work of more than 350 artists from 32 states. Each artist has been designated a webpage featuring photos of their art, as well as links to their social media and personal online store, where festival-goers can buy artwork that catches their eye.

But even with their work showcased digitally, some artists have been struggling to make what they usually would have during a normal year.

Gina Chalfant, a potter who lives in the South Hills, sells her work under the name White Swan Studios and has participated in the festival for the last 10 years. Chalfant said an artist can make thousands of dollars a day by selling their work at an in-person festival like Three Rivers, an amount difficult to match through online sales.

“I know people want to touch art, they want to see it, and it always looks a lot better in person,” Chalfant said. “I’m still getting sales from the online [market], just not as many as if I was there.”

Besides displaying the artist market and exhibits, this year’s digital festival includes films that can be streamed for free, a map displaying eateries that offer takeout and videos demonstrating hands-on activities that can be done from the comfort of home.

The festival has also found a way to showcase the musicians and dancers scheduled to perform by creating two digital stages — one displaying prerecorded videos of at-home performances, and another one that streams performances live every night at 7:30 p.m.

The festival opened last Friday night with a livestream show hosted by Josh Verbanets and WQED’s Rick Sebak that featured The Buckle Downs, a Pittsburgh-based band.

In between songs, Sebak and Verbanets, who hosted the show from their respective homes, discussed the importance of the festival to the Pittsburgh community.

“For 61 years we’ve been celebrating this city through art,” Sebak said. “Art does help heal and I think art helps keep us together.”

Aziz said she hopes this year’s festival brings people together during a time of physical and ideological disconnect.

“There’s a lot of art that’s part of the festival that can really create meaningful dialogue,” Aziz said. “Even though we’re not all with each other in the parks, we can still be together and have these artful experiences together.”