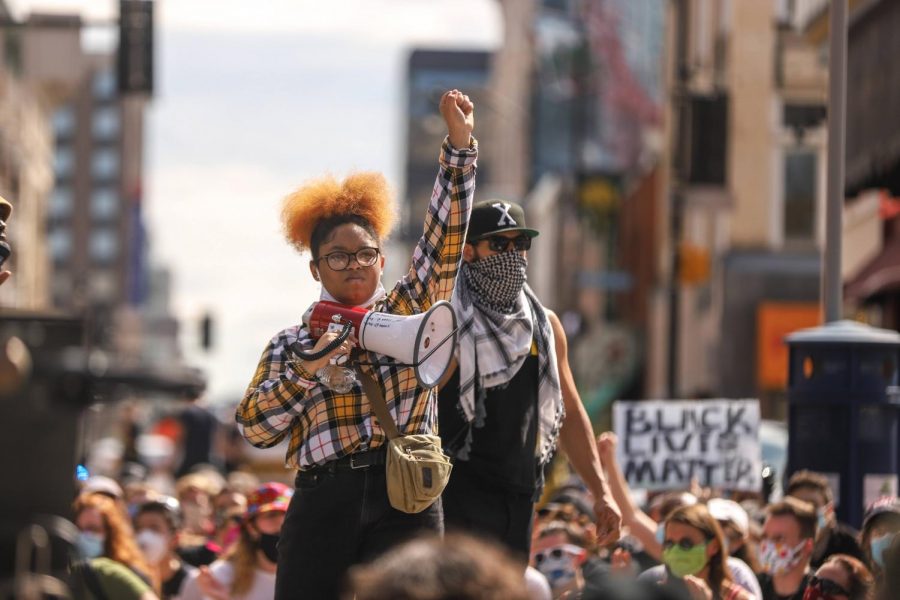 A protest organizer leads chants from the middle of the crowd on Saturday.

Protestors marched from Squirrel Hill to Oakland on Saturday, as part of a nationwide movement to protest the death of George Floyd, a black man who died in late May at the hands of Minneapolis police. White police officer Derek Chauvin, who has since been charged with murder and manslaughter, knelt on Floyd’s neck for eight minutes as Floyd said he couldn’t breathe. The protest follows similar gatherings in Downtown, East Liberty, Oakland, South Side, and Bakery Square.

In continuation of last week’s “Civil Saturday” series of protests, protesters gathered in Squirrel Hill to protest police brutality at the intersection of Forbes and Murray avenues. Protesters proceeded to march down Forbes Avenue towards Oakland, chanting, “Hands up! Don’t shoot!” “No Justice! No Peace! No Racist Police!” and “Black Lives! They matter here!” Protesters sat down on Pitt’s campus at the intersection of Forbes Avenue and South Bouquet Street, and held a small rally. Protesters then turned onto Fifth Avenue to return to Squirrel Hill, where they later dispersed.

Chancellor Patrick Gallagher said Thursday that Pitt has failed many of its black students and is planning multiple reforms to help combat racial injustice on campus.