Letter from the Editor | We must capitalize the B 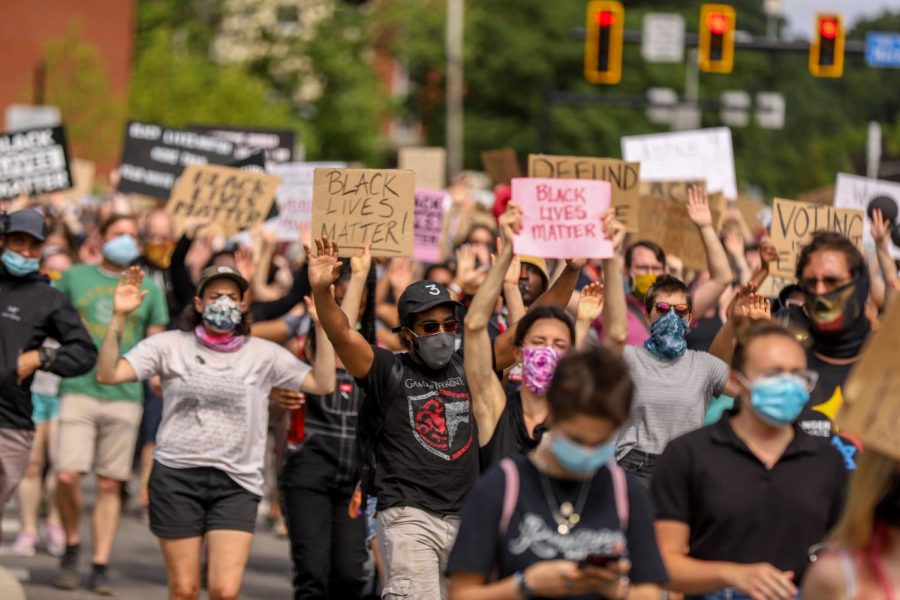 Protesters march down Forbes Avenue at a protest Saturday.

Our nation is at a critical time.

We are in the midst of a pandemic that has cost us more than 110,000 lives thus far and forced a mass campus exodus. We are also in the middle of a mass protest movement — despite decades of police brutality, it appears as though change is on the horizon after the particularly brutal and horrific killing of George Floyd at the hands of Minneapolis police last month.

These crises present us all an opportunity to rethink the past and rectify past wrongs. We at The Pitt News have reflected and continue to reflect on what this means for us, both as an institution and a newspaper trying to report and document.

We will implement a new style rule, beginning immediately, to capitalize Black, as we should have done long ago. This change may seem small, but it’s not. I encourage all other newspapers to follow us — we must grant our fellow community members the full respect they deserve, and using lowercase simply does not do this. The National Association of Black Journalists is also encouraging the move.

I cannot speak for previous leaders of this institution. I would think they did not intentionally mean harm by not capitalizing the B. Our default style rules come from The Associated Press, the premier journalism organization. We nearly always give deference to its famous Stylebook, just assuming the AP knows best. I know I did this when we ran several op-ed pieces about the Black Lives Matter movement.

But that’s just the point. This behavior is part of an institution — institutional racism. The fact that no one thought to change this style rule earlier, or, it ultimately did not come to pass, is the problem. This pernicious conduct is not just limited to journalists and affects all parts of our society. I am trying to do my part in breaking this chain through this change.

We are also taking other steps to cover this movement, in ways we may not have before. We have sent our lone photographer still in the Pittsburgh area out to as many protests as possible, to document them with photos. We have chosen to run op-ed pieces submitted by leaders of our campus’ Black community, including the Black Action Society, African Students Organization and Carribean and Latin American Students Association. We have also featured writing by experts who study these issues, at places such as Pitt’s own Center on Race and Social Problems. These decisions are deliberate — we want our readers to both see and hear directly from Black leaders, and learn about what they think needs to be done. I am glad we have been able to provide a platform and lift voices. Besides first-person writing, we are also doing important reporting work on what is happening in Oakland and calls for changes.

The job of a newspaper is to help create well-educated and well-informed citizens who take part in civic life and democracy. We have not fully achieved this goal because we didn’t make these changes — we still have a long way to go, but I hope we are now one step closer. It is incumbent upon whoever holds this position to be a leader in Oakland and also in the student journalism community. Barely a month into this leadership position, my 20-year-old self only realized a few days ago that, hey, I have the power to make a change like this. I hope this change will encourage other Pitt and community leaders to see how they can contribute to dismantling institutional racism.

We can and must continue to do better. As the quote goes, the definition of insanity is doing the same thing over and over and expecting different results.

Jon Moss is the editor-in-chief of The Pitt News. Write to Jon at [email protected].