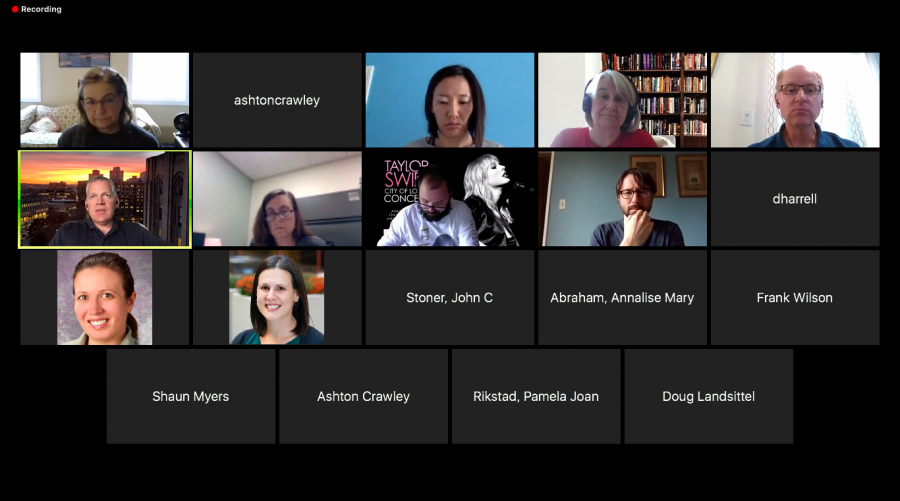 Though students will be back on campus for the fall semester, Pitt officials said Monday that students will likely not have to be in class every day of the week, as part of the [email protected] teaching model.

Joe McCarthy, the vice provost of undergraduate studies, said the University is considering a rotating cohort model, where large lectures are split into small groups of students who attend in-person instruction on different days of the week. He said a class with 60 students may meet three times each week in groups of 20 students.

“What we’re trying to do is is arrange our instruction in such a way that a student can engage remotely with a synchronous class, but then that synchronous class would be recorded,” McCarthy said.

The University Senate’s Educational Policies Committee met Monday to discuss further plans for the fall semester, and discussion centered on the modified academic calendar and the possibility of classes meeting in smaller groups.

The committee also briefly discussed a petition created by Pitt alumna Sydney Massenberg, which calls on the University to include a Black studies course as part of general education requirements. Bonnie Falcione, a committee co-chair, said the committee would establish a working group to look into the petition and said anyone interested in serving should contact her.

McCarthy said the first three days of the semester will be held remotely in order to give students a chance to meet through Zoom to ask questions, as well as give more time to students who are still securing living situations. In-person classes will then begin on Aug. 24, the fall semester’s original start date.

McCarthy said despite modifications made to the calendar, it will maintain the normal 15-week-long semester, but in-person instruction will conclude at the end of November. Finals will occur before students leave for Thanksgiving, due to the difficulties of administering online exams for large classes. McCarthy said the University has added an extra five minutes between classes to allow for disinfecting classrooms.

Officials said earlier this month they were conducting an inventory of all classrooms that was completed last week. Classes are now beginning to be rescheduled this week based on this inventory, with [email protected] technology upgrades installed in select classrooms in the following weeks.

Another concern for administrators is making sure all Pitt students are able to make it to campus, if they would like to. Nathan Urban, the vice provost of graduate studies, said he has heard from many international graduate students who have struggled to obtain visas for the upcoming semester. He said the University has been working on multiple ways for graduate students to plan for the fall and spring semesters.

“We put together guidance that has been distributed to associate deans about the scenarios that would allow students to participate that wouldn’t influence the likelihood that they could get visas,” Urban said.

Urban added that some graduate students could continue to receive a stipend even if they’re outside of the United States.

“There’s a lot of work to try and figure out with students who are in programs such as clinical programs that require certain levels of clinical training, how it is that students can get access to that training and complete their degree or continue to make progress,” Urban said. “Given the restrictions on people’s activities during COVID-19, that’s been a bit of a moving target.”

The committee also discussed restarting research, and ensuring that graduate students have access to proper protections in labs. Urban said policies may differ across different departments.

“There is no one standard within the University because M.D. students and nursing students are through their programs being put in environments where they are directly interacting with COVID-positive patients,” Urban said.

Despite all of the changes to Pitt’s schedule this fall, McCarthy said he’s hopeful that the fall semester will go smoothly after the sudden changes in the spring.

“I understand it’s going to be a heavy lift for faculty, but I don’t think it’s even going to be as heavy as what people had to endure in the spring,” McCarthy said.