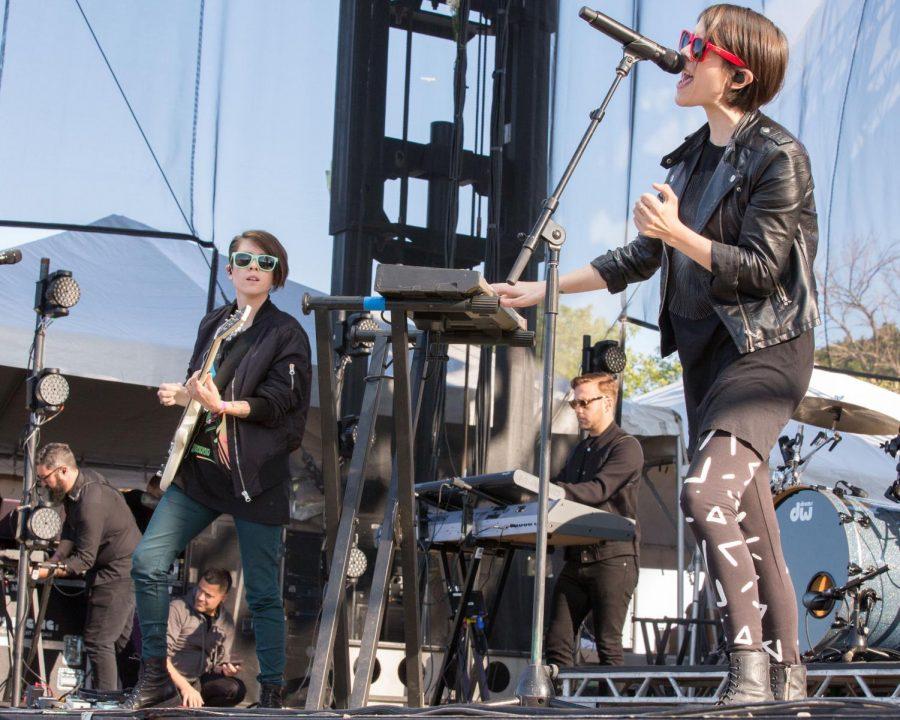 When not onstage singing, Tegan and Sara Quin use their voices to advocate for LGBTQ+ equality, as well as other human rights movements.

By Kaitlyn Nuebel, For The Pitt News

Still, many queer artists remain unheard of — especially outside of the LGBTQ+ community — leaving their catchy hooks to float around aimlessly in the world of streamed music with no identifying name or story behind them.

Pride Month shines a light on the LGBTQ+ community and its members, although their music, art and stories shouldn’t only be recognized in June. Regardless of your sexual orientation or gender identity, here are a few artists in the LGBTQ+ community to listen to this month — and every month after.

Known for the hit “Closer” off their 2013 record “Heartthrob,” Tegan and Sara have been an ambitious duo from the start. At the age of 15, the identical twins from Calgary, Canada, taught themselves how to play guitar and write songs, landing them a record deal at 18.

More than 20 years later, Tegan and Sara have written nine studio albums and toured all over the world. Throughout it all, they have evolved their sound quite a bit, transitioning from indie rock beginnings to more of a synth-pop.

Most recently, Tegan and Sara delved back into their years as rookie musicians, rerecording songs they wrote in high school to create their latest album, “Hey I’m Just Like You,” which came out last fall. The duo also wrote a New York Times bestselling memoir entitled “High School,” which recounts the origin of their band. It explains the stories behind the songs on the record, which are mostly about first loves and coming to terms with their queer identities.

When not on stage singing, the Quin sisters use their voices to advocate for LGBTQ+ equality, as well as other human rights movements, and have even created the Tegan and Sara Foundation, a nonprofit to improve the lives of LGBTQ+ girls and women.

When Julien Baker wrote her debut album, “Sprained Ankle,” in 2015, she didn’t think anyone would listen to it. She wrote the album during her time as a student at Middle Tennessee State University and, with the help of a friend, self-recorded it in two days.

Still, The New York Times named “Sprained Ankle” one of the best albums of 2015, launching Baker’s music career. Baker plays her songs solo, accompanied by nothing other than her Fender Telecaster and a few guitar pedals. Her voice, raw and vulnerable, takes a stab at heavy topics like faith, depression and addiction while throwing in a few self-deprecating lines like “I know I’m a pile of filthy wreckage you will wish you’d never touch.”

Baker’s songs, slow and yes, a bit sad, tend to sound more like carefully constructed poems. This makes sense — in an interview with The New Yorker, Baker described her writing process as consciousness stemming from journal entries.

Baker, who grew up in Memphis, Tennessee, identifies as gay and Christian, two aspects of her identity she considers mutually inclusive. While Baker doesn’t write Christian music, she plays with a rainbow guitar strap while singing about her belief in God, making space for queerness and faith to coexist.

Baker released a second album in 2017 titled “Appointments.” In addition to her solo work, Baker co-created the band boygenius alongside singer/songwriters Phoebe Bridgers and Lucy Dacus.

Before Shea Diamond released her first single, “I Am Her,” in 2016, she sang it years prior while laying on the floor in prison. Diamond, who identifies as transgender, said she committed armed robbery to pay for gender reassignment surgery and served 10 years in prison for it.

Diamond’s music career took off when Justin Tranter, a songwriter who has written for pop stars as big as Selena Gomez and Justin Bieber, saw her perform a cappella at a Trans Lives Matter event. Tranter contacted Diamond and flew her out to Los Angeles to record her first EP, “Seen it All,” released in 2018.

The Soul and R&B singer’s first lyric in “I Am Her” is frank: “There’s an outcast in everybody’s life and I am her.” It’s no wonder the song has become an anthem in the transgender, Black and gay communities — it expresses the isolation felt by marginalized people, while encouraging them to feel proud of their identity.

Morgan Karr, who goes by his stage name, Morgxn, debuted his first single, “Love You With the Lights On,” in 2016. Known for his 2017 hit “Home,” which became even more popular when he rerecorded it a year later to feature Walk The Moon, Morgxn has slowly gained traction in the indie rock world, releasing his own new music as well as collaborations with other artists.

Morgxn — who chooses not to label his sexuality, but identifies broadly as a member of the LGBTQ+ community — often portrays queer themes in his music. He wrote “Carry the Weight,” a song off his 2018 album “Vital,” after being called a gay slur in public. The song, which Morgxn referred to in a Facebook post as his personal anthem, captures the difficulty and the need to stand up for oneself.

The music video for Morgxn’s original iteration of “Home” also has a queer narrative, telling the story of a bullied teen who finds solace dancing with fellow members of the LGBTQ+ community at a night club.

As Pride Month draws to a close, let’s remember to listen to and talk about all kinds of LGBTQ+ artists for the other 11 months of the year. Only then will LGBTQ+ representation and diversity be brought to the forefront of mainstream music, becoming a norm instead of the exception.