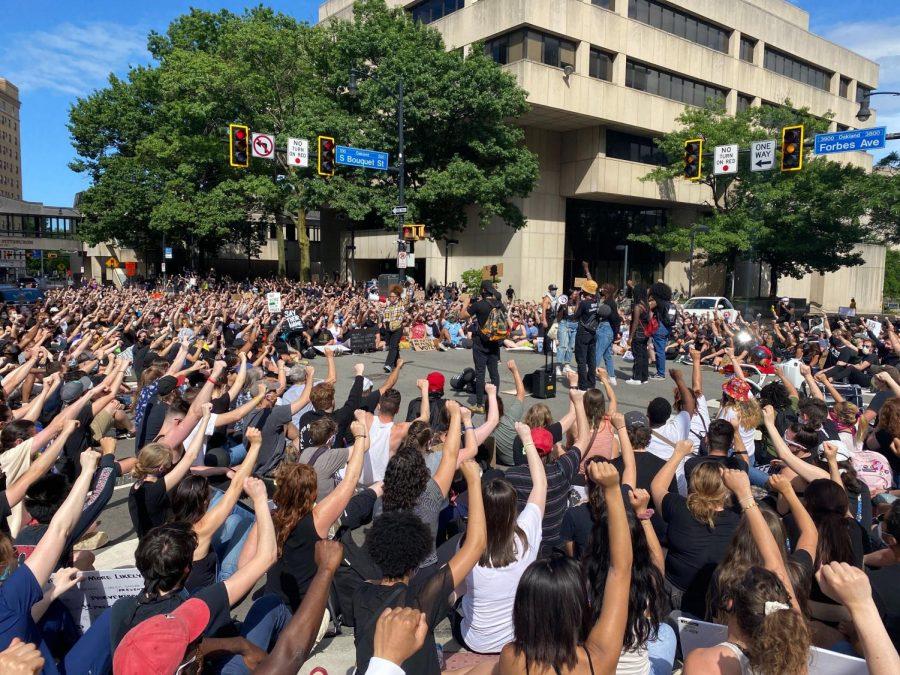 Hundreds of Black Lives Matter protesters raise their fists in solidarity at the intersection of Forbes Avenue and South Bouquet Street on June 13.

We in America, and at Pitt, must confront an elephant in the room.

This elephant in the room is a significant problem that is very obvious to most people, but many do not wish to discuss the problem because it would make them uncomfortable. Moreover, a full discussion of the issues might result in a call for major structural changes — changes that people have been, so far, reluctant to make. At Pitt and throughout the nation, this elephant is the utter failure to satisfactorily address systemic racism. Yet, following the public killings of Black people and, in turn, large-scale protest movements, institutions have been forced to deal with systemic racism.

At Pitt, the Black community recently served as catalysts for the discussion of the elephant in the room. In addition to individual leadership on campus, some of what transpired took the following forms:

Curtiss Porter and I, two Pitt alumni heavily involved during the Civil Rights Movement, submitted to the senior administration a document on June 10 entitled “White Paper for An Historically White University in Search of Equity and Social Justice.”
A group of 18 Black Student organizations issued a series of demands to the administration on June 22.
The dean of Pitt’s School of Medicine agreed on June 19 to comply with numerous wide-ranging demands from Black students, after multiple meetings and more than 400 petition signatures.
During its Juneteenth event, the Black faculty and staff organization Equipoise issued a clarion call for change.

Consistently, the demands noted the inadequate presence and meaningful involvement of Black students, faculty, staff and administrators; insufficient outside the classroom programming related to the Black community; the need to address the Black experience in the classroom and by way of research; the absence of clearly defined ways for all members of the University community to address racism on campus; additional scholarships to provide opportunities for Black students and the need for the University to use its many resources to appropriately engage the local Black community. Of special concern regarding this moment in time is the fact that the University, like the larger society, has been here, done that before in terms of addressing this elephant in the room.

Essentially, the scenario is that systemic racism becomes so flagrant that some blatantly inhumane act(s) against Black people spark insurrections. Then comes the plethora of public pronouncements condemning systemic racism, followed by the creation of high-level commissions to study and make recommendations regarding how to address systemic racism.For example, President Harry Truman created The President’s Committee on Civil Rights in 1946. President Lyndon Johnson established the Kerner Commission about 20 years later. Decades later, President Bill Clinton established The Advisory Board to the President’s Initiative on Race. In each case, the “leading experts” advised the most powerful “CEO” in the world regarding what to do about what began as “The African Holocaust in America,” continued as Jim Crow and segregation and has persisted until today. And therein lies what is so troubling — notwithstanding the “blue ribbon” commission reports’ many positive recommendations and the “CEO’s” responsibility as well as authority to make changes, Black people have remained systematically oppressed.

Institutions of higher education, like Pitt, have also had their cycles of dealing with the race-related elephant in their respective rooms. Notably, in 1969, it took Black students’ seizure of the Pitt Computer Center to get the senior administration’s attention. Since then, the University has ebbed and flowed when it comes to addressing the needs of the Black community, and in 2020, the Black Pitt community has made it clear and some University officials have acknowledged that we have so much further to go.

With the foregoing in mind, several elephant-in-the-room-type questions must be asked. Given their control of the University’s financial, physical and human resources, why is it the case that, over decades, the University’s board of trustees, senior administration, deans, directors, department chairs, faculty and others in leadership roles have not adequately addressed equity and social justice? If equity and social justice are truly important, then the University administration must answer, “What conditions have we created that maintain certain groups as the perpetual majority here?”

To that, I add, for the past century, why have the boards of trustees and the respective University administrations been permitted to do what would not be tolerated of a football coach? If a football coach had suffered dreadful losing seasons such as 2-8 for more than five years in a row, what would be done? Would the leadership need an alumni-written “White Paper for Addressing White Coaches at a Historically White University?” Before acting, would the leadership wait until the players issued demands to the University administration? Would the University leadership consult with the assistant coaches regarding what action steps to take? Would the administration hire expensive consultants to advise them on when to hire a new coach? No, of course we would not. Why not let that also be true for the pursuit of equity and social justice?

Imagine the positive possibilities in terms of advancing equity and social justice outcomes if faculty, staff, trustees and administrators were held to the same accountability standards as football coaches. One immediate outcome would be that many Black students would not find themselves exhausted mentally, physically as well as emotionally as a result of daily “overcompensating to make up for the University’s failures at combating racism on campus,” as members of 18 Black groups recently described themselves. And to those students, I end with the commitment expressed by former First Lady Michelle Obama: “I want our young people to know that they matter, that they belong, so don’t be afraid … Young people, don’t be afraid. Be focused, be determined, be hopeful, be empowered … lead by example with hope, never fear, and know that I will be with you, rooting for you and working to support you for the rest of my life.”

Jack Daniel is a Pitt alumnus and retired senior administrator and distinguished service professor. He was the first chair of Pitt’s Black Studies department, now known as the Africana Studies department, from 1969 to 1974. He served in various other administrative positions from 1974 to 2005, including the dean of students and vice provost for undergraduate studies.