Amid uncertainties, Pitt volleyball aims to build off historic season in 2020 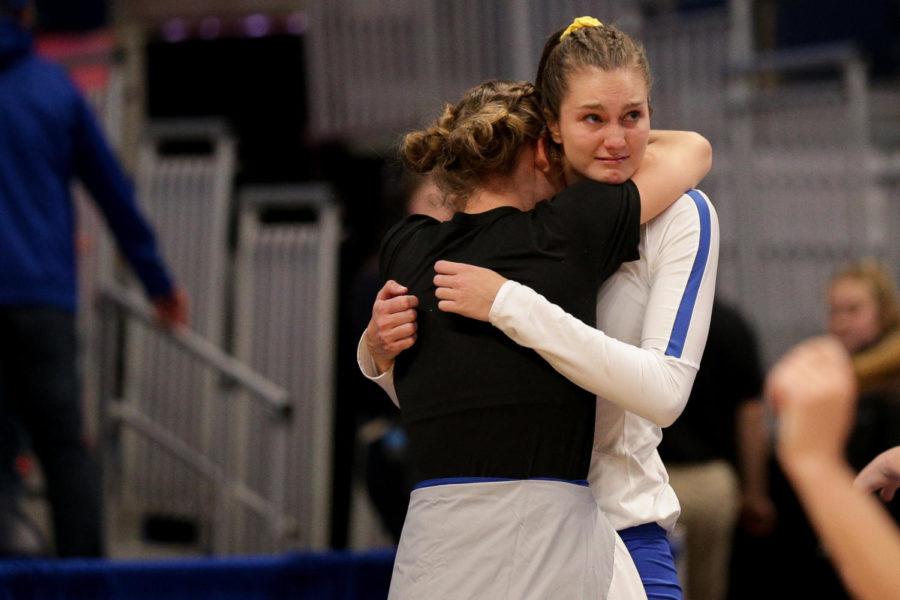 Pitt volleyball's seniors missed their last opportunity to make it to the NCAA volleyball championship last season with the team’s loss to Cincinnati.

The gut-wrenching image of Pitt volleyball’s seniors in tears after last season came to a shocking end still rings through to Pitt fans many months later. The team with an unblemished resumé that set new program highs the entire season had once again found itself eliminated in the NCAA Tournament’s first weekend of matches.

Since then, the existence of college sports has been thrown into limbo for the fall, as the United States has fallen behind in the fight against the COVID-19 pandemic. Only a few months away from the tentative start to the season, head coach Dan Fisher’s squad has prepared with the mindset that their 2019 postseason disappointment can still be avenged this fall.

While in quarantine, the volleyball players had to acclimate themselves to an at-home workout regimen. As COVID-19 restrictions around the world changed, some of the athletes gained access to gyms and workout facilities in their hometowns.

From an administrative side, Fisher and his staff have faced tough offseason adjustments during the pandemic, trying to make the summer feel as normal as it could possibly be.

“Obviously, when you can’t train your team you lose the most important part,” Fisher said. “But we’ve just made sure with video sessions and working with our sports psychologist that we’ve gone through every aspect of what we would’ve done if we were together from an x’s and o’s standpoint and a mental standpoint.”

Pitt welcomed volleyball athletes back to campus on June 29, along with four other varsity teams, to begin a phased voluntary offseason in-person training schedule.

Besides the slight adjustment of planning for a more regional preseason, Fisher said the team hasn’t received updates on how the upcoming season will be conducted, so members are training with the assumption that they could play a completely ordinary season.

Outside hitter Kayla Lund is entering her senior season with a chance to cement herself as Pitt’s greatest volleyball player in program history. With her resumé stacked with prestigious honors, the reigning ACC Player of the Year said she is looking forward to a chance to exceed last year’s milestones.

Although she feels her leadership role will remain the same, Lund said she has grown in that role up to this point.

“I think me being a senior, I’ll appreciate it a little more, not that I don’t already,” Lund said. “Just thinking that it’s my last year and how crazy everything already is. I think there’s a lot going on, so I’m just really hoping that my senior year can happen.”

The 2020 Panthers will look a whole lot different from the team fans last saw on the court. Pitt must find lineup replacements for All-ACC honorees Layne Van Buskirk, Hali Hillegas and Stephanie Williams. Despite these losses, Fisher said he felt confident that players with smaller roles last year will emerge in the spotlight with more opportunities.

“One thing that we felt like last year is that we had a very good freshman class,” Fisher said. “We had some players that in other years would’ve been on the court a lot. One of the disappointments with the offseason being cut short is we were making some pretty good strides with some of those younger players.”

Pitt also will get immediate help from some of its key additions. East Tennessee State University transfer Marija Popovic, the 2019 Southern Conference Libero of the Year, seems like a likely candidate to compete for the vital position after Hillegas’ departure.