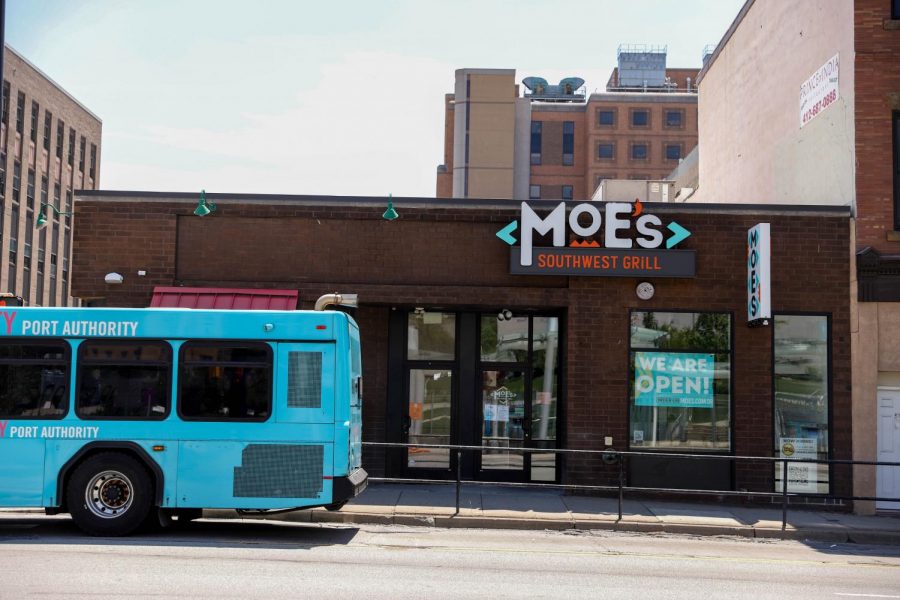 The new Moe’s in Oakland officially opened June 19 after delaying its opening for 10 weeks due to COVID-19.

Although Moe’s Southwest Grill is most commonly known for its queso and customizable menu, the new Moe’s in Oakland might be known for something else — kiosks.

This new Moe’s officially opened June 19 after delaying its opening for 10 weeks due to the ongoing COVID-19 pandemic, owner Mike Geiger said. Located at the corner of Fifth Avenue and Atwood Street, across from UPMC Presbyterian Hospital, the restaurant sits in the heart of campus. Unlike a traditional Moe’s establishment, the Oakland eatery is the first all-digital location for the chain of more than 700 restaurants.

According to Geiger — who also owns 10 other locations and is a member of the company’s advisory board — Oakland was an optimal area for a new digital ordering process because of its large student population.

“We are right in the heart of so many college students who are tech savvy and who understand the technology,” Geiger said. “So we don’t have to go through a large education curve to get customers to understand how it works.”

Although the ordering process will be different, the menu and signature “Welcome to Moe’s!” greeting will be the same as other locations. But all orders in the location will be placed via kiosks instead of the typical assembly line.

“In Oakland, you wait in line for an open kiosk, place your order and then pay with card, cash, Pitt Fuel or Panther Funds,” Geiger said. “Then you walk to the front and have that transaction at the register there, so you’re not walking down the line for your food to be assembled like in other locations.”

According to Dave Umstott, the general manager of the Oakland location, the digital kiosks allow for a more efficient process for both employees and customers.

“Digital ordering definitely makes things easier for everyone involved,” Umstott said. “It’s a simpler process and is easier to execute during our peak periods. We’ve definitely seen improved accuracy on both sides.”

If customers don’t want to order inside the restaurant, they can use the official Moe’s app or third-party delivery services, such as DoorDash or Grubhub. According to Geiger, what makes Moe’s stand out is its emphasis on variety, and in Oakland, the restaurant is going beyond just culinary customization.

“We’re taking the Moe’s experience that was originally variety-only from a culinary perspective, but now we’re doing it from the full experience perspective in that we don’t care how you want to use us — we’re going to make ourselves available to you,” Geiger said.

For Geiger, one of the most important features of the new location is an easy ordering experience.

“My entire goal was to be as accessible and easy to use for everybody,” Geiger said. “We wanted to have this seamless user experience, where it didn’t matter if you were on our website, app or any other platform, that everything would look the same exact way.”

According to Umstott, the digital-ordering interface has been a great way to keep both customers and employees safe, especially due to the popularity of contactless food service during the COVID-19 pandemic.

“Going all digital is giving us a stronger opportunity to manage our business in the safest way possible,” Umstott said. “The guests also can order their food in advance to eliminate all the potential hazards involved by interacting with several different people.”

Katie Sherman, a rising sophomore studying athletic training, visited the new location on campus on July 1. She said the kiosks were an easy way to order food efficiently.

“I really liked using the kiosk to order,” Sherman said. “The kiosk is really convenient, especially given the current pandemic.”

Sherman added that she thought other Oakland restaurants could benefit from kiosk-style ordering, like that at Moe’s.

“I think some restaurants like Roots or Chipotle might benefit from it just so they can eliminate the long lines they have,” Sherman said.

But Umstott said even though the new location has brand-new technology, the most important aspects of Moe’s still remain the same as other locations.

“At the end of the day, we’re still rolling burritos,” Umstott said.