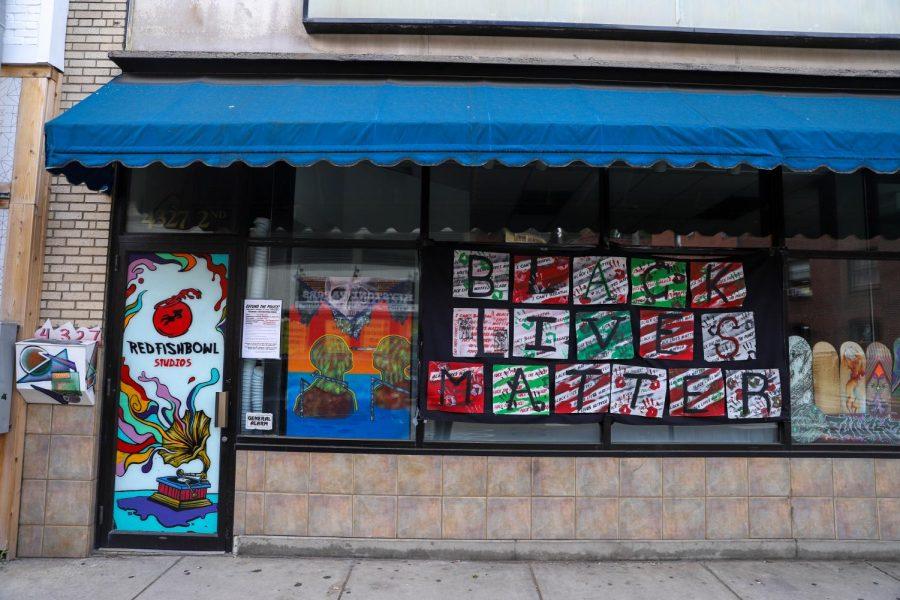 Local artist Trenita Finney recalled feeling uncertain when nationwide protests broke out in late May over the repeated killings of unarmed Black people by the police. She said she wanted to contribute to the Black Lives Matter movement, but felt like she couldn’t do enough with her skillset.

“I was like, ‘How are there ways I can help? How can I take the abilities I have right now and help people?’” Finney said. “I was afraid that just making pictures isn’t enough and donating isn’t enough and speaking out isn’t enough.”

Finney has since found a way to use her art to benefit the movement. As a resident artist at Redfishbowl, an artist collective and gallery in Lawrenceville, she works alongside fellow artist Jerome Charles on an initiative to create materials for protestors, such as signs and T-shirts. Redfishbowl and its collaborating artists are also leading other initiatives to raise money for Pittsburgh organizations dedicated to bailing out protestors and supporting Black and trans people.

Among Finney’s projects is a shirt she designed, available for $15 on Redfishbowl’s website. The shirt features the image of Breonna Taylor — a Black woman killed by the police in her Louisville, Kentucky, home in mid-March — alongside the words “say her name.”

Finney said she decided to focus her design on Taylor to draw more attention to what she felt was an ignored case — none of the four officers involved in Taylor’s death have faced charges, and only one has been fired.

“It seemed like Breonna Taylor’s case was just kinda getting covered up and we weren’t talking as much about her, so I wanted to be part of making sure she gets the justice that she deserves,” Finney said.

Proceeds from Finney’s T-shirts benefit TransYOUniting, a Black-run organization that provides services to transgender and nonbinary people in Pittsburgh. Finney said she was approached by a friend from the group to help make a banner for their Black Trans Lives Matter protest, which, along with her personal experience protesting, led her to consider using the money from her shirts to benefit Black trans people.

“I want to make sure I’m supporting people that I know and the people in my community,” Finney said. “Something that happened in one of the first protests I went to was chanting, ‘Protect Black Women. Protect trans women.’ That was kind of echoing in my head. I would like to do both of these things.”

Redfishbowl is also bringing artists together for collaborative projects. Sierra Bryant, an artist who lives in nearby Wexford, said the collective’s founder and manager, Chris Boles, reached out to her and several other artists to each paint a letter on a 45-foot banner that spells out “Black Lives Matter.”

Bryant painted her letter “R” with an original design, featuring a raised fist with each knuckle colored a different skin tone overlaid on a rainbow heart. She said she had used the design, which she calls a Unity Symbol, in her previous works.

“To me, it encapsulates everything. It’s about love, it’s about all colors, all creeds, all men, women — it’s inclusive,” Bryant said. “When I see it, I don’t feel like it excludes anybody, and I hope others view it that way as well.”

Redfishbowl has not announced what exactly it plans to do with the banner, but said in a June 24 Instagram post that it will be the focal point of an upcoming benefit show, the date of which has also not been announced.

Other artists are contributing to social causes using more traditional media, including Jennifer Ramsey, who sells her work through Redfishbowl’s gallery space. Ramsey had been unable to attend protests for fear of spreading COVID-19 to her high-risk family members. Instead, she made a painting that Redfishbowl later auctioned off to raise money for the Bukit Bail Fund, which pays bail for those in Allegheny County Jail who can’t afford it themselves.

Ramsey’s painting, called “Lady Liberty,” depicts a young black woman posed in front of a distressed American flag background, with a white outline of the Statue of Liberty’s crown on her head and white stars spotting her face. Ramsey said the work is based not on any one particular person, but the current political climate in general.

“My inspiration behind it was the Black Lives Matter protests that have been ongoing, the new civil rights movement that we’re seeing,” Ramsey said. “I was thinking about doing some pieces about this movement and then just kind of had this idea.”

According to Ramsey, “Lady Liberty” raised $385 for the Bukit Bail Fund when it sold on June 26. She said as a white artist, she wanted to be respectful about basing her work off experiences she hasn’t personally faced, adding that she thought taking the money from the painting for herself would mean unfairly profiting off the Black Lives Matter movement.

“I’ve been very careful not to try to appropriate anything I don’t personally know or have experienced,” Ramsey said. “This context is particularly difficult to know how to navigate if I’m going to try to make a profit off of it. I don’t feel that I can.”

Although Redfishbowl’s initiatives have earned money to support organizations bringing about justice directly, Bryant mentioned that art can also do good by offering a perspective into our current political climate — one that might contradict narratives about division and hatred.

“We’re gonna look back 20, 30 years from now and look at 2020 and it’s gonna be paintings of all colors of people wearing masks in the street,” Bryant said. “I think more than separation it’s gonna be looked back on as a time of unity. I’m really excited that we get to be a part of this.”