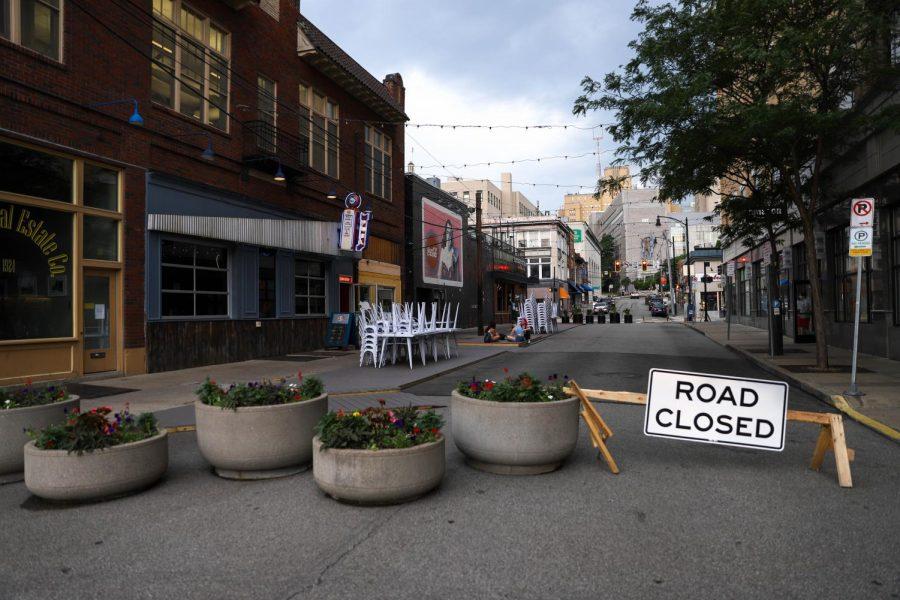 Oakland Avenue between Sennott Square and Forbes Avenue shut down on June 8 in order to provide outdoor seating space for the surrounding restaurants.

As Pittsburghers return to restaurants, business owners in Oakland have found a way to accommodate more customers while keeping them out of cramped, potentially dangerous dining rooms.

Oakland Avenue between Sennott Square and Forbes Avenue shut down June 8 in order to provide outdoor seating space for the surrounding restaurants. Brandon Smith, the co-owner of Fuel and Fuddle, said the outdoor dining area opened June 12 and has seating for customers of his own restaurant and the neighboring Stack’d, as well as a common area where anyone can sit. Oakland Avenue will remain closed for outdoor dining until Sept. 30, according to Smith.

The closure was part of an initiative by the Oakland Business Improvement District, which worked with business owners and the City to acquire permits and close the street safely, Executive Director Georgia Petropoulos told CBS Pittsburgh. Petropoulos did not respond to multiple requests for comment.

According to Smith, the process of reopening his restaurant, acquiring the necessary permits — including one to serve liquor outdoors — and opening the patio happened much faster than he expected.

“We did not anticipate being open until July, but then everything happened so quickly, so they rushed the permits and stuff, which was great,” Smith said. “The Liquor Control Board allowed a temporary permit for the outdoors until our official permit came in.”

Smith said he’s seen people frequently sit down on Oakland Avenue to have takeout or drinks from surrounding restaurants, something that benefits business owners not just on Oakland Avenue but throughout the neighborhood.

“It ended up being pretty cool because the tables in what we’re calling the common area, they’re being used a lot by everybody just getting a cup of coffee or Fuku Tea. It’s actually worked out for the neighborhood, too,” Smith said.

Since restaurants in Allegheny County can’t operate at full capacity, Smith said having the option of outdoor seating helps him serve significantly more customers than the restaurant’s small dining room would otherwise accommodate.

“We are at 50% capacity inside, which cuts us down to about six tables inside because we’re so small and the tables have to be 6 feet apart,” Smith said. “We have more seating outside right now than we do inside, so you can imagine if that outside seating weren’t there, we would have almost nothing.”

Lauren Conley, an administrator for Stack’d, echoed Smith’s sentiment that the street closure has helped business by way of expanding the existing outdoor space.

“It has helped tremendously. We do have outdoor seating already. This has given us the opportunity to be able to accommodate more customers,” Conley said.

When it comes to restaurants, the Centers for Disease Control and Prevention said dining outside is less risky than inside, and Smith noted that his customers seem to feel safer with the option to sit outdoors.

“I think it’s definitely helped our business a lot, just because of customers’ anxieties about going indoors and eating. The tables outside have been super successful,” Smith said.

Conley said, in her experience, guests want to come out to eat again, and the patio allows Stack’d to meet that demand while also keeping the community safe.

“We feel people are eager to get out and help support their local businesses and return to some sense of normalcy,” Conley said. “This [outdoor dining] gives customers more opportunity to do so while following the guidelines.”

Although the new seating has helped his restaurant in the first few weeks of its reopening, Smith said he expected to see the full extent of its benefits once Pitt students come back to campus — which is why he’s currently limiting Fuel and Fuddle’s hours to the afternoon and early evening and waiting until August to serve the late-night menu.