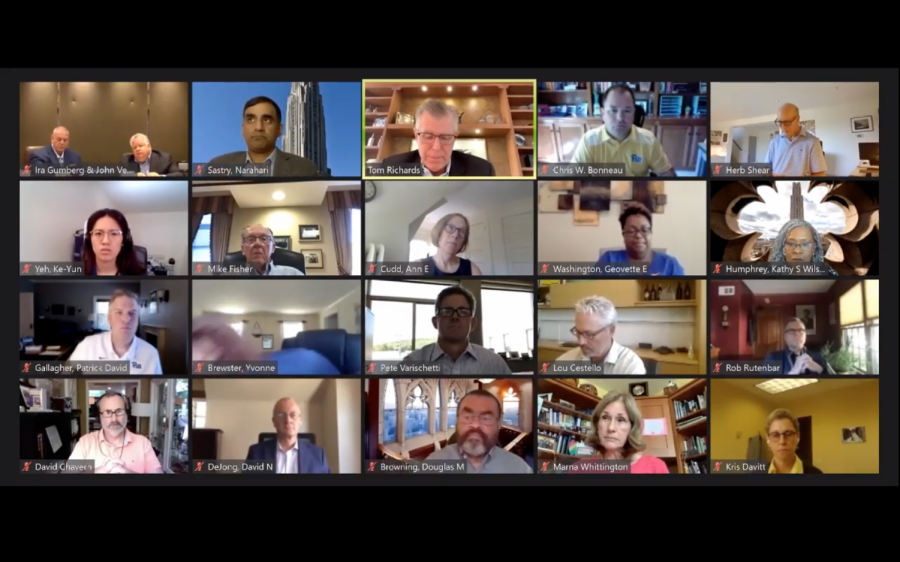 Pitt’s nearly $1 billion education and general budget will contract by around 5.9%, or $51.6 million, next year, following Wednesday morning approval from the budget and executive committees of the University’s board of trustees. The E&G budget will shrink from roughly $930 million in 2020 to around $878 million in 2021, though the entire University budget will remain around $2.4 billion. In all, Pitt is applying two budget cuts — a permanent one at roughly 3.7% and a temporary one at around 5%.

Tuition and fees will remain flat, as Chancellor Patrick Gallagher previously signaled in the weeks leading up to the budget vote, after hikes last year of between 2.75% and 7%. Total compensation in the education and general budget is expected to stay roughly the same, at around $720 million.

Gallagher said the University has worked to avoid or delay all possible expenses next year, such as travel or equipment costs. It is also working to try and streamline internal services as much as possible, such as the recent Pitt IT consolidation.

As much uncertainty remains about the upcoming fall semester due to the ongoing COVID-19 pandemic, the budget cut is less than some had feared — parts of the University were preparing in May for possible budget cuts of as much as 10%.

The largest contributor to Pitt’s budget is net tuition — tuition and fees minus discounts, such as financial aid — which is ultimately derived from student enrollment. The budget expects a drop of around 7% in net tuition for the upcoming academic year, despite that officials said last month that enrollment numbers looked “very good,” even in the face of COVID-19 concerns. The reversal of a new Trump administration policy that would have led to deportation in some cases for international students will likely be a boon for tuition figures.

Other major revenue sources for the University are state funding and the annual distribution from the endowment. Gov. Tom Wolf signed a flat funding bill for Pitt on May 29, much earlier than the usual July, due to a budget deal cut by legislative leaders, easing some budget pressures for Pitt.

A board committee approved a flat payout from Pitt’s $4.3 billion endowment for the upcoming year in mid-June, deciding not to tap the unrestricted part of the fund to help relieve some budget tension. Some faculty members have argued it would be wise to pull more money out of the endowment to avoid far-reaching cuts, though others said it would be best to take advantage of budget cuts to “trim the fat” of Pitt’s budget.

Other areas of Pitt’s budget are also changing in the upcoming year. The auxiliaries budget, which includes housing, dining and other services, are expected to earn around $142 million this year, down 12% from last year’s nearly $160 million. But costs for these auxiliary operations are expected to increase this year by around 24%, from roughly $120 million to $149 million. This is caused, in part, by Pitt leasing around $22 million in hotel rooms to de-densify student housing.

Pitt’s capital budget will shrink by nearly 80% during the upcoming year, as part of an effort to defer projects that do not need to be completed while the pandemic is ongoing.