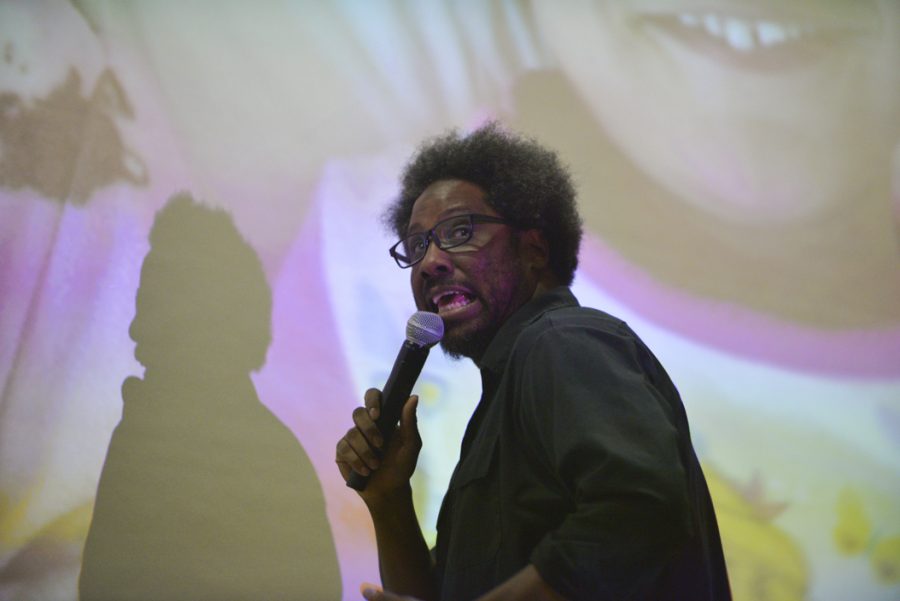 As a stand-up comic, W. Kamau Bell has made a career around being funny — but that doesn’t mean he takes political issues lightly. The comedian went without pre-rehearsed jokes to talk to Pitt community members Thursday evening about making change on campus and in their city.

The lecture —  part of a collaboration between Pitt Program Council and Black Action Society —  was hosted via Microsoft Teams by PPC Lecture Director Quincey Johnston and BAS President Morgan Ottley. It featured questions from both hosts and members of the audience, of about 35 students and faculty, on how they can work to improve the lives of Black members of the Pitt community.

Bell, who hosts “United Shades of America,” a CNN show about race and politics in communities across the country, spoke on a myriad of issues pertaining to racial equality, including the history of racism in America, his favorite Black-owned businesses and the faults of internet cancel culture.

Overall, the lecture focused around strategies for student activism — something that Johnston, a rising junior chemistry major, said she knew PPC had to address when she saw Black Lives Matter protests erupt in late May.

“We really wanted to make sure we put something out this summer where we could have a lecture that talked about the movement, especially before students got back on campus,” Johnston said.

Johnston said she asked BAS to help plan the lecture, including the selection of the speaker, because she “wasn’t exactly sure what would fit and what the community needed.” According to Ottley, a rising senior neuroscience major, the pair chose Bell because he had spoken for BAS in the past.

“He was one of BAS’ speakers about four years back,” Ottley said. “I thought it would be great to bring him back because this group of students did not get to experience that.”

The first question of the night, posed by Johnston and Ottley, asked about the connection between the ongoing COVID-19 pandemic and police brutality. Bell said he saw the pandemic partially as an issue of race and social equity, because COVID-19 has disproportionately impacted Black communities.

As a self-identified Black nerd, Bell also gave his take on the recent prevalence of Black superheroes in comic books and movies, such as “Black Panther” and “Spiderman: Into the Spiderverse,” which featured Miles Morales, a Black teenager, as a young Spiderman. He said although representation is important, he wants writers to portray Black characters in a way that doesn’t feel forced.

“I feel like when it’s a Black version of a white hero, I’m always still wanting a Black hero — the hero that starts out Black, feels Black and is Black,” Bell said. “There didn’t used to be a White Panther who became the Black Panther.”

According to Bell, shows and movies also have the power to help people understand different perspectives. He said his experience with “United Shades” taught him that simply sitting down and watching a show that features Black voices can help non-Black allies explain issues, such as racism and police brutality, to older, more close-minded family members.

“One of the great things I’ve learned from pop culture is that people’s brains will start to shift if you put different images in front of them,” Bell said. “With ‘United Shades of America,’ I hear about that all the time, with kids making their parents watch it as a way to build a conversation.”

Some questions were tied to the experiences of Black students at Pitt. Nana Gyabaah-Kessie, a rising senior molecular biology major and president of the African Students Organization, asked Bell how he dealt with well-meaning people who insist their Black friends educate them on Black issues. She said she felt drained when white acquaintances constantly asked her how they can be allies.

Bell agreed that no one person can be an expert on racism, and white allies can easily take the time to educate themselves rather than ask Black friends to do so. He recommended pointing those people to resources, such as books and websites, that they can use to read up on issues, and making it clear that constantly having conversations about race is emotionally draining for those impacted by racism.

“Come up with some resources that when a person comes up to you and says, ‘Can you help me?’ you just send them those resources,” Bell said. “If that’s not in your job description, that’s not your job, and let those people know, ‘I’m doing you a favor if I spend any time explaining any of this to you.’”

Gyabaah-Kessie said after the event that Bell’s advice made her realize she can decide not to educate someone if it taxes her emotionally. She also said she hopes non-Black allies can accept that they have to put in that work themselves.

“This opened my eyes and made me realize that no, in fact it’s not my job to educate you on things you can simply Google,” Gyabaah-Kessie said. “Being active in pursuing justice can take a toll on someone. If a Black person tells you ‘I’m sorry, I can’t give you that information,’ whether it’s temporary or permanently, you should accept that as what it is.”

Bell also offered advice for students trying to balance coursework and other responsibilities with activism. He said supporting a movement takes a lot of energy, but when you feel tired, you know you’ve done something worthwhile.

“It’s about making sure you’re doing something every day to keep pushing forward,” Bell said. “This is the time of exhaustion, and if anyone’s too well-rested right now, I don’t really trust them.”

Ottley, who has been helping lead BAS and a coalition of other Black student groups demand change at Pitt over the past few weeks, said hearing Bell acknowledge her exhaustion as a necessary part of activism felt validating.

“A lot of the time, I think, ‘What is it like to not have to continually fight just to be treated like an actual human being?’” Ottley said. “[Hearing that] was almost like a reminder that the work you’re doing is for a purpose.”