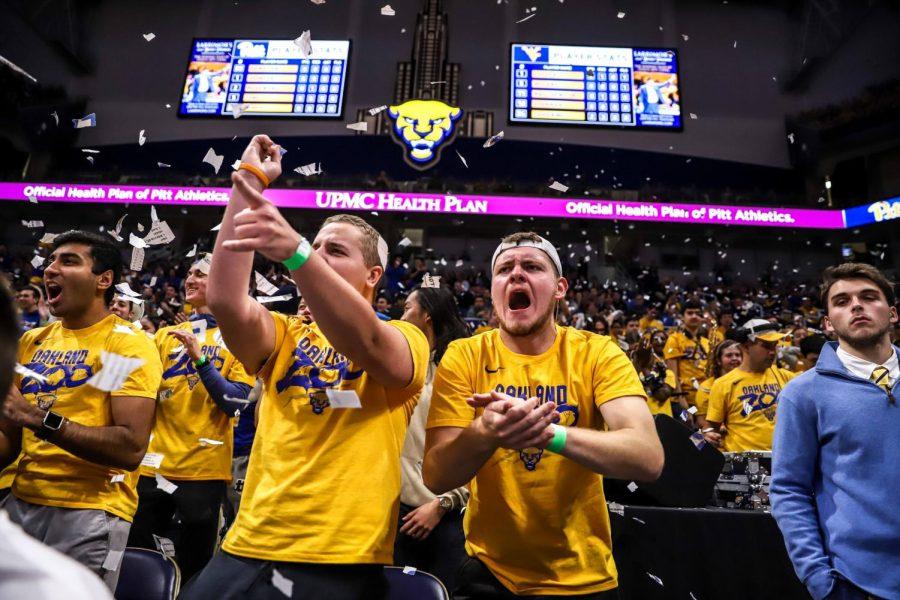 The Oakland Zoo celebrates the first basket of the Pitt men’s basketball game versus West Virginia in November with the traditional tossing of newspaper shreds.

New students, welcome to the Panther family. As students of an Atlantic Coast Conference school and residents of the city of Pittsburgh, you will quickly find that sports are an integral part of life on Pitt’s campus. While a simple Google search will turn up much about Pitt’s rich athletic history, this is a guide for what every new student needs to know before setting foot on campus.

Pitt boasts 19 Division I programs, across which they have won five ACC championships since joining the conference in 2013. Men’s wrestling and women’s gymnastics are among the Panther programs to have taken home conference titles since conference realignment, but the most successful program for Pitt right now is the women’s volleyball team.

Pitt volleyball has won three straight conference championships from 2017-19, and continues to improve by the season. While the football and basketball games draw greater attendance, the volleyball team boasts an astonishing record of 86-11 since 2017. They rarely disappoint, and their games are always electric to watch in person. The team’s schedule is always posted outside the Fitzgerald Field House, their home court.

The Fitzgerald Field House, or “The Fitz,” is the longest-standing athletic facility on campus. In addition to volleyball, the 69-year-old facility is currently home to Pitt’s indoor track and field, wrestling and gymnastics teams. The Field House was also the former home court of Pitt men’s basketball for 50 seasons, and the site of perhaps the most iconic moment in Pitt sports history, when Jerome Lane shattered the backboard on an emphatic alley-oop slam.

If you have not seen the play, watch it. You will hear “Send it in, Jerome!” quite a bit over the next four years.

Men’s basketball is one of the school’s two most recognizable programs, along with football. On the court, Pitt has struggled to find their footing after moving to the ACC. But do not let their recent struggles overshadow decades of success.

From 1982-2013, Pitt played in the Big East, arguably the best basketball conference over that time span. The Panthers were at the top of college basketball in the 1980s and 2000s, but never broke through and won a national championship. As head coach Jeff Capel builds the program back up, they should be held to a standard of success by their new fans.

In fact, student fans are essential to the team’s success. Pitt’s basketball student section — The Oakland Zoo — is one reason why the Panthers have been able to post a dominant 251-59 record all-time at the Petersen Events Center, making “The Pete” a tough venue for an opposing team to win a game.

No team in the nation looked forward to playing in front of the passionate Pitt student fanbase. While the Panthers have not yet experienced the same success they did in the Big East, this past season’s win over eventual ACC champion Florida State showcased that “The Pete” remains one of the most electric environments in the country.

The Zoo practices traditions such as throwing newspaper confetti in the air after Pitt’s first field goal, standing and jumping for the entire game and most importantly, being completely crazy. In the Zoo, you’ll see wacky costumes, signs and chants. While this may throw you off at first, it throws off the opposing team as well, and you’ll soon find that the most important part of being a Pitt fan is to play into the craziness. The Panthers truly thrive on the invigorated, passionate student fanbase.

Just a short walk beyond the Petersen Events Center is the Petersen Sports Complex, the home of several programs, including Pitt men’s soccer. While the Panthers certainly struggled to find their footing in the ACC, they flipped the script in 2019, placing second behind eventual national champion Virginia in the coastal division. Pitt was able to make their first NCAA soccer tournament, as well as host and win their first NCAA tournament game in 54 years. Led by one of the best goal scorers in the nation, Edward Kizza, the Panthers could be a force to be reckoned with for years to come.

Finally, there is so much a new student must know about Pitt’s most storied program, its football team. The Panthers have been on the rise as of late, winning the ACC Coastal Division title in 2018, and their outlook for 2020 is as bright as it has been in decades. But Pitt boasts a legacy and collection of alumni to which few other schools can compare.

Mike Ditka, Dan Marino, Larry Fitzgerald, Tony Dorsett, LeSean McCoy, Aaron Donald –– the list of current and future NFL hall of famers goes on and on. In fact, Pitt has the third-most NFL hall of famers of any college program. The marquee moment in Pitt football history is their iconic national championship victory in 1976, led by Heisman-winning running back Tony Dorsett. While the football program has remained a priority, much has changed since that title.

The football team plays their games at Heinz Field, also home of the Pittsburgh Steelers. They began playing on the North Shore when Pitt Stadium, the former home of the Panthers located where The Pete is today, was torn down in 1999. You will certainly hear clamor for an on-campus stadium during your time at Pitt, and nostalgia for its rugged, domineering position on top of Cardiac Hill.

On game days, Pitt runs shuttles to transport students to and from Heinz Field. Students find their place behind the home endzone in the Panther Pitt. After big wins, such as this past year’s upset win over No. 15 UCF, players often dive into the stands to celebrate with their fellow classmates. At the end of the third quarter, Pitt students have a sometimes controversial tradition of singing the song “Sweet Caroline.” Although the stadium is about a 10 minute drive from campus, football games are an essential part of the Pitt experience. Regardless of the result, Heinz Field provides memories to last a lifetime.

By choosing to attend Pitt, you chose to attend a school with an enormous amount of school spirit and pride. Pitt’s athletic events truly bring students together and drive the heartbeat of the University. Not only are you a student at Pitt, you are a Panther, and will soon discover and experience the tradition behind that title.