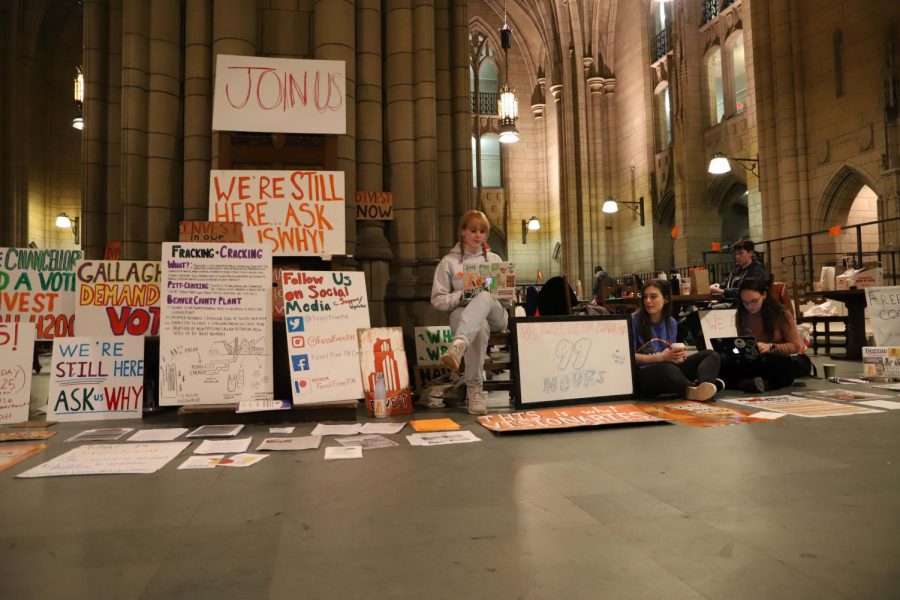 Members of the Fossil Free Pitt Coalition staged a February sit-in in the Cathedral of Learning, calling for fossil fuel divestment.

From a spring semester moved online abruptly to a reckoning over racial injustice on campus, news continues to break every day. With many uncertainties still looming about the upcoming fall semester, here is a guide to some of the biggest stories at Pitt.

In response to George Floyd’s killing, Chancellor Patrick Gallagher announced in a June email that the University would halt its release of Plan for Pitt 2025, after an initial six-month hold announced last month due to the COVID-19 pandemic, to include strategies to strengthen racial justice on campus.

But students are also taking matters into their own hands. The Black Action Society and 17 other Black student organizations sent a list of more than 20 wide-ranging demands to the administration in late June. The coalition called for increased enrollment and hiring of Black students and staff, the creation of more than 50 scholarships in the names of victims of police brutality and reforms to the Pitt police, among other items.

Pitt’s School of Medicine agreed in June to address numerous demands made by Black student leaders, including additional scholarships for Black students, an overhaul of the School’s Honor Council and an investigation into the selection process of the medicine honor society Alpha Omega Alpha.

A committee is also being formed to consider the renaming of Scaife Hall, the home to the School of Medicine. The building is named after Alan Magee Scaife, the father to Richard Mellon Scaife and Cordelia Scaife May, heirs to the Mellon fortune. May gave more than $180 million to anti-immigration causes through the family’s Colcom Foundation.

The Fossil Free Pitt Coalition occupied the Cathedral of Learning for a week in February, in an effort to demand that the board of trustees vote to divest the University’s $4.3-billion endowment from the fossil fuel industry.

The group also wants trustees with direct ties to the fossil fuel industry to abstain from voting, the inclusion of a public comment period at board meetings and for students to “have a seat at the table” regarding any ensuing reinvestment decisions.

Students interrupted the Feb. 28 board meeting with calls for divestment, at which the board approved measures to create a formal socially responsible investing process for the endowment. The board announced at its June meeting that it will form an ad-hoc committee to study whether the University should divest from fossil fuels.

Pitt’s Graduate Student Organizing Committee kicked off its unionization effort in 2016, seeking to join the Academic Workers Association of the United Steelworkers. Its reasons for wanting a union include higher wages, increased benefits, greater transparency and increased protections against discrimination and harassment.

The Pennsylvania Labor Relations Board issued a proposed ruling last September that Pitt committed three unfair labor practices that potentially influenced the results of an April 2019 graduate student union election. The outcome of the election was 675 for and 712 against unionization. The University later filed a formal exception in October 2019, pushing the matter to the full three-person board.

A second election could take place this year, depending on the timing of a final PLRB ruling. Pitt has paid “union avoidance” law firm Ballard Spahr more than $1 million in legal fees between July 1, 2018, and June 30, 2019, to provide legal support during the separate graduate student and faculty campaigns for unionization.