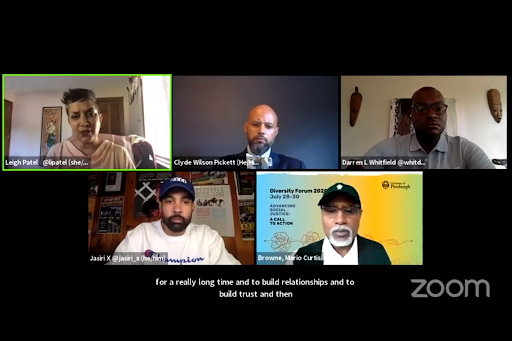 Clyde Wilson Pickett, the new vice chancellor for diversity inclusion, made his first public appearance during a Tuesday event as part of Pitt's Diversity Forum.

These statistics, among others, are why Jasiri X, a rapper, activist and founder of local activist group 1Hood Media, believes responding to racial injustice in Pittsburgh requires not just symbols, but substance.

X and other community members shared their thoughts on the Black Lives Matter movement and racial inequities in Pittsburgh at the panel discussion “A Call to Activism: Witnessing Globally, Responding Locally.” This session, part of Pitt’s fifth annual Diversity Forum, focused on addressing and mitigating systemic injustice at Pitt and in the broader community.

X also highlighted Dannielle Brown’s hunger strike as an example of local activism. Brown is currently on the 25th day of her strike at the Hill District’s Freedom Corner in response to her son Marquis’ October 2018 death at Duquesne University.

“It’s one thing to know that Ms. Dannielle Brown is on Freedom Corner having a hunger strike for the 25th day, it’s another to go down there,” X said. “The call is for people to come out and assist folks getting justice in Pittsburgh. We still have two different cities, with two different experiences for Black and white people.”

Clyde Wilson Pickett, who began this month as Pitt’s new vice chancellor for diversity and inclusion, said he is optimistic about Pitt’s potential to be a more equitable campus.

“I wish to express my enthusiasm and committment my colleagues at Pitt have taken to advancing the early steps to leading an anti-racist institution,” Pickett said. “The road ahead must be led with direct and transparent commitment and action.”

Pickett said part of this is recognizing the intergenerational trauma that minority students face in higher education.

“We’re talking about the multigenerational experience of what it means to be impacted by racism,” Pickett said. “We have to witness that, amplify that and talk about what that means.”

Pickett added that it is important to encourage activism as a leader on Pitt’s campus.

“We have to ask questions as leaders about how to amplify the voices of people who aren’t always heard,” Pickett said. “How do we normalize activism? We can’t just hang the responsibility on those who have been in the trenches.”

Many viewers expressed excitement about Pitt’s commitment to racial equity on campus in the livestream’s comments section, while others demanded that Pitt take a more active approach by supporting Brown’s hunger strike and urged administrators to participate in protests.

“We live in a society that is unfair, that is unjust and the cards have always been stacked against [Black and indigenous] communities, and until we reconcile this we can’t hope for equity,” Whitfield said. “This university has a moral obligation to re-educate every student, every faculty member about the true nature of our society and about the true contributions of Black folks.”

Whitfield added that these re-education programs have to be more than just one mandated course, but embedded in all courses. The University is currently considering a petition started by Pitt alumna Sydney Massenberg to create a new Black studies general education requirement course.

Whitfield added that beyond reeducation, Pitt will have to make meaningful, long-term investments in anti-racism initiatives. He cited Pitt’s two community engagement centers in Homewood and the Hill District as endeavors that could be helpful or hurtful to the community, depending on the University’s policies.

“Pitt has committed to these community engagement centers, which on face are great opportunities, but what are the policies and procedures to benefit people that were there before we got there?” Whitfield said. “It’s not enough to host these forums and invite speakers. Where’s the capital?”

Whitfield said he hopes this movement is more than just a moment, at Pitt and the rest of the country.

“People have called what’s happening in this country a moment,” Whitfield said. “I hope that’s not true — I hope it’s a reckoning.”