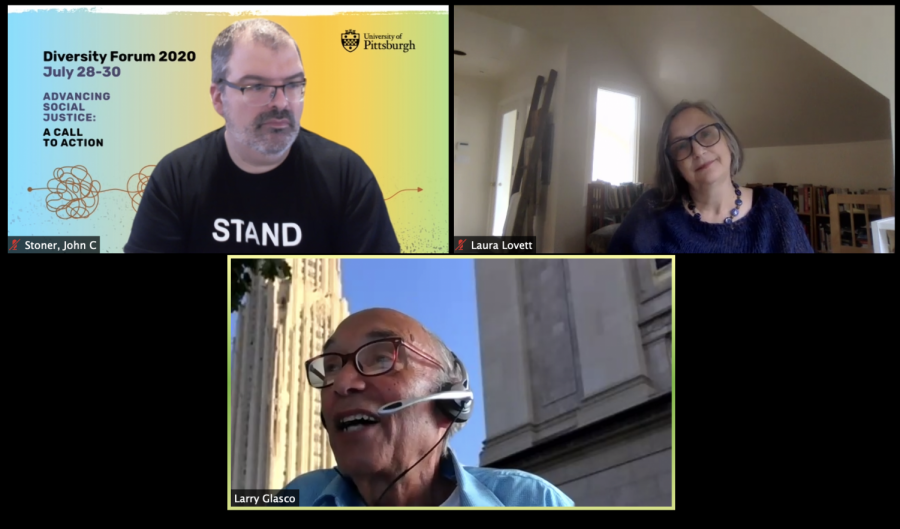 Three faculty members from the history department spoke about the history of race and protest Thursday morning at the “How Did We Get Here? Histories of Race, Discrimination, and Protest” session.

History can help us better understand our current circumstances, such as the centuries-old attitudes towards race that still permeate the public today. But for all of the benefits of examining history, senior history lecturer John Stoner said it can’t predict the future.

“One of the things we often get is, ‘What will happen now?’” Stoner said. “There’s a small subfield in the history of the future, as it’s known, but we’re really good at explaining why things happened in the past.”

Three faculty members from the history department — Laurence Glasco, Laura Lovett and Stoner — spoke about the history of race and protest Thursday morning at the “How Did We Get Here? Histories of Race, Discrimination, and Protest” session. The event, part of Pitt’s Diversity Forum, drew more than 200 participants.

Each panelist spoke on a different subject related to race in Pittsburgh, and in America more broadly, with time at the end for audience questions. Glasco, who studies Black history in Pittsburgh, gave an overview of the history of the Hill District, a diverse neighborhood that historically has seen little racial conflict. It was the site of large protests in 1968, following the killing of civil rights icon Martin Luther King Jr. and tensions from the construction of the Civic Arena boiled over.

“The district itself had no history of race riots [before the 1960s],” Glasco said. “In fact it was a history of different groups getting along well together, both in the 19th century and the 20th century.”

As an example of relaxed race relations in the Hill District, Glasco cited the white-owned newspaper The Advocate, which in 1841 called Black residents of the neighborhood “excellent citizens who take pride in the prosperity of the town.”

“This is 1841. It was a time of slavery and obviously of great prejudice,” Glasco said. “But on the other hand, it shows that there were differences in the way people were viewed, the way they accepted one another.”

Another important element in the history of the Hill District is photographer Teenie Harris — who worked for decades at The Pittsburgh Courier, known today as The New Pittsburgh Courier — one of the country’s leading Black newspapers.

Glasco helped organize the Teenie Harris archive at the Carnegie Museum of Art, which went on display earlier this year. He said Harris’ work captures a thriving Black community in the Hill during the 20th century, adding that The Courier itself is essential to Black history nationwide.

“Despite the discrimination, despite the lack of full opportunities, Blacks managed to create a positive and really engaging community here,” Glasco said. “The Pittsburgh Courier was the largest circulation Black paper in the country — larger than those in New York, Chicago and the like.”

Glasco emphasized the importance of exploring race relations in a way that doesn’t portray Black people in the past as powerless.

“Often when we talk about Black history and race relations, it’s strictly a history of violence, oppression and resistance,” Glasco said. “It will go on, people think, forever.”

One recent project addresses the ways in which the process of redlining overlaps with eugenics and issues of gender and sexuality. Redlining, the discriminatory process through which the federal government drew community maps, determined who should receive federally-subsidized home loans. Affluent white neighborhoods were outlined in green and blue on these maps, signifying positive attributes in the eyes of the federal government, while immigrant neighborhoods were outlined in yellow and Black neighborhoods in red.

Those living in green and blue areas were more likely to receive federally-subsidized mortgages, become homeowners and accumulate value on their homes, which Lovett said ultimately became generational wealth.

“Often that accumulation was passed on to children, so it becomes the way in which a rising, especially white, middle class begins to afford college, begins to help their children afford homes,” Lovett said.

According to Lovett, redlining is rooted in eugenics — the practice of regulating reproduction so that the genetic makeup of a given population becomes more “desirable.” Lovett compared the language of Homer Hoyt, the economist responsible for making redlining maps for the federal government, to that of the American Eugenics Society.

“[The Eugenics Society] created a system for grading and understanding individuals,” Lovett said. “They create a racial hierarchy on their perception of those grades, and it’s the same kind of language that [Hoyt] is borrowing.”

Racism is deeply rooted in American history. But according to Stoner, Americans also have a history of fighting against these systems. Speaking on the history of protest in America, Stoner noted that Black people did not begin resisting oppression during the Civil Rights movement of the 1960s, but as far back as the earliest days of slavery.

Stoner also said historians need to consider the recent Black Lives Matter protests in Portland, Oregon, because as a relatively white city, Portland has not historically been a site of mass protest.

“One of the things we have to think about contextually are how cities that aren’t the usual hotbeds of protest, at least when race is a dominant factor, are popping up,” Stoner said.

And although Stoner maintained that historians can’t predict the future, he said he thought they have a duty to consider how people in the future will look back on today.

“What we can do to a degree is think about the ways the future historians will analyze these moments.” Stoner said. “The results and the impact are going to hinge on a couple of things, [including] the durability of these protests.”