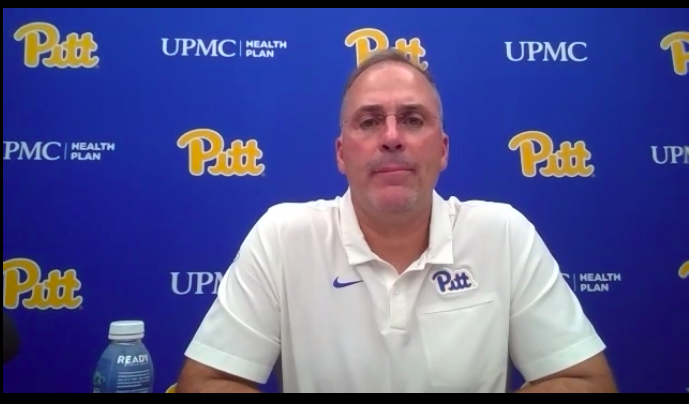 Pitt head football coach Pat Narduzzi is a self-proclaimed optimist, and he said Friday even the stress of opening a football season in a pandemic hasn’t put a strain on his sunny outlook.

He said a week ago that he was “100% confident” that the procedures Pitt had in place would allow for a college football season. On Friday, he gushed about how sharp his football team was on their first day of training camp.

“Of my six first practices at the University of Pittsburgh, this was the smoothest,” Narduzzi said. “Now, I’m an optimistic guy, but I really thought… the sharpness of our kids… No fumbles on the ground, no mishandled snaps, those kinds of things.”

But his praises and positive perspective did little to overshadow the looming challenges that the ongoing COVID-19 pandemic still poses.

Pitt football opened the 2020 training camp Thursday in its South Side practice facility, where 113 players gathered with some major, pandemic-induced changes made to the normal procedures.

Players will stay in their own houses, apartments or dorms — instead of making the typical move to a South Side hotel — during camp, plastic shields attached to each helmet’s face mask covers players’ mouths, all-team meetings are held in a socially distant manner on Pitt’s indoor practice field and every water bottle is wiped down by a trainer before being handed to a different player.

“It’s the new normal,” senior center Jimmy Morissey said. “You got to get used to it.”

And on Aug. 19, add to that “new normal” an extension of remote learning that began during the spring semester.

Although the University initially said in-person class would begin Aug. 24, the doctor leading Pitt’s COVID-19 response would not commit to when classes could move in person, leaving them online for the time being. Narduzzi, though, falsely said during the press conference that in-person classes would begin on Aug. 19, the start date for the semester. The start date for in-person classes remains unclear, according to Pitt officials — a fact that Narduzzi, whose daughter begins her first year at Pitt this fall, was unaware of.

But an unclear picture for in-person classes begs the question of how the University justifies holding practices and interscholastic competitions for athletes, where it is impossible to maintain proper social distancing and other safety measures.

In an exclusive Friday interview with The Pitt News, Chancellor Patrick Gallagher said the key dates for all kinds of University operations — from housing to academics to athletics — are fluid and can be changed based upon the health situation that Allegheny County finds itself in.

“We’re trying to get information out to people and a lot of things take lead time,” Gallagher said. “When classes are gonna start — whether they are in person or online… will depend on the local circumstances. These planning dates are contingent upon the reality of the time — the operating posture, the risk and the guidance we get from the Department of Health and from our medical team.”

He added that the Atlantic Coast Conference’s decision to schedule football games has no bearing on whether or not they will actually be played, and that final decisions on the status of athletic events will be made by health officials.

“The fact that the ACC has to generate a schedule… is independent from whether there will be football or not,” Gallagher said. “That decision will be made closer to the date based on the medical advice.”

When asked if they are comfortable playing football even though the University has not scheduled a start date for in-person classes, senior quarterback Kenny Pickett and Morissey said they are.

“They gave us the option of — when we do go back to class — to stay online, which I will do,” Pickett said. “Just not to put myself at risk and be around people that I’m not normally around at the football facility.”

Senior defenders Patrick Jones II and Damar Hamlin echoed Pickett and Morissey later when speaking to the media and said they are encouraging teammates to do the same.

Jones also stressed the extent to which older players and coaches are encouraging underclassmen to be as responsible as possible, whether it means staying home from classes or avoiding parties and other large gatherings at home in Oakland.

“I talk to them every chance I get,” Jones said. “Like, I get it — it’s college and you want to have fun, but you gotta look at the bigger picture. We have guys out here who are trying to play ball, trying to have a season and have a successful season, so [they] have to put their priorities in line.”

Hamlin added that “the most responsible team” when it comes to staying healthy will be the most successful this season.

Beyond just keeping each other safe, the caution with which the Panthers have operated is aimed towards preserving what they hope is a special 2020 football season. A host of talented veterans headline this year’s Pitt team and leave Oakland abuzz about what could be a banner year.

Pitt’s players and coaches said they are determined to realize their potential and play through their revised ACC schedule. The dates of their 10 ACC and lone non-conference match-ups were revealed by the conference on Thursday and the Panthers welcome a more difficult slate.

Despite the challenges, Morissey and his teammates are confident and eager to play with the nation’s biggest players.

“I thought the schedule got a lot better,” Morissey said. “I’m excited… I’m excited to go down and play Clemson.”

Pitt is scheduled to open their promising 2020 campaign on Sept. 19 against Syracuse at Heinz Field.