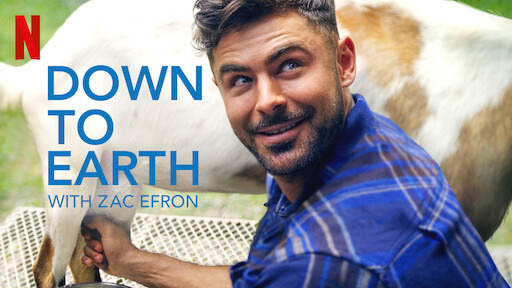 Netflix’s new documentary series “Down to Earth with Zac Efron” follows the actor and his co-host Darin Olien as they travel to places all over the world.

This weekend, we’ve got a few summer additions to streaming platforms you may have missed. Sit back, relax, sip a drink with an umbrella in it — enjoy this last gasp of summer before classes get into full swing and the weather finally turns fall-appropriate.

You might have missed this gem when season one dropped in early 2019, but Netflix propped up season two quite a bit when it hit the streaming service in late July, and deservedly so. This sci-fi dark comedy follows the Hargreeves siblings, seven of 43 other children who were all born on the same day to separate mothers who weren’t already pregnant. The spooky Reginald Hargreeves adopts the seven, who each possess supernatural abilities, and raises them in his militaristic mansion as superheroes, calling them The Umbrella Academy.

Viewers regroup with the since-fractured six remaining Hargreeves children as adults in episode one. Not only has Reginald died, but the gang learns they have eight days to band together to stop the apocalypse.

Familiar personalities such as Ellen Page and Mary J. Blige blend seamlessly with other emerging talents to craft a glorious web of heroes and villains. A soundtrack stacked with bops complements both the slick yet quirky fight scenes and the pivotal, poignant moments. Since you’ve probably watched the trailer at least once during your recent Netflix perusals, go ahead and give this one the shot it deserves in your list of favorites.

Never Have I Ever (Netflix) // Nadiya Greaser, Staff Writer

Everything about “Never Have I Ever” is too much, in the signature style of creator Mindy Kaling. It’s awkward true-to-high-school cringe is even funnier when you aren’t in high school and can laugh at the curfews and crushes from the safety of your apartment or dorm room.

While it might feel on-the-nose to watch a show about school starting the week the semester starts, the beachy vibes and perpetual sun of the San Fernando Valley — where the show is set — plus the refreshing out-of-doors hijinks make it a bingeable pick for the last week of summer.

As narrator John McEnroe (I promise it makes sense) says in the intro, Devi Vishwakumar (Maitreyi Ramakrishnan) is going into her sophomore year as the paralyzed Indian girl whose dad dropped dead at a school function, and it gets worse (and better) from there. Devi’s general ego centrism and belief that her problems are the worst problems anyone has ever had make her a hilarious, if un-self-aware, protagonist. Her offbeat friends, smarmy nemesis and eye candy crush all break the mold in unexpected and satisfying ways.

Creator Mindy Kaling has a knack for taking sitcoms, rom-coms and teenage comedies and turning them on their heads, leaning into the best cliches while changing out tired formulas for better ones. It has the style and wit of “The Mindy Project” and the awkward humor and growing pains of “Sex Education,” an unexpected but ultimately good combination.

Escorted by a global pandemic, your summer trip probably didn’t extend beyond an excursion from your kitchen pantry to your living room couch. To all the disappointed travel enthusiasts, don’t worry — Zac Efron has you covered.

Released this July, Netflix’s documentary series “Down to Earth with Zac Efron” follows the actor and his co-host Darin Olien as they travel to places all over the world in search of “some new solutions to some old problems.”

Each 40-minute episode highlights a new location, one viewers have likely never visited (or maybe even heard of) before and focuses on a different topic regarding the preservation of a healthy life and planet. From learning about sustainable energy in Iceland to the wildlife preservation in Iquitos, viewers fill their passports with enriching cultural and environmental insights, creating the next best alternative to international travel during a global pandemic.

Novel locations and foods create vacation vibes that blend well with the series’ advocacy for environmental change, making for not only an enjoyable watch, but a show that will have you reconsidering your interaction with the planet long after you’ve turned off the TV and cracked open the books.

Heavy on charm and wit, light on runtime, sort of middling on existential dread, “Palm Springs” is the ideal rom-com for late in the summer of the pandemic.

Set in a daily time loop —  “Groundhog Day” style — the feeling of crushing routine and regularity that weighs down Nyles (Andy Samberg) and Sarah (Cristin Milioti) should speak to any of us in our perpetually quarantined states. The story of how they adapt over time should provide us with some much-needed catharsis as we dream of an escape from our universal lockdown-derived claustrophobia. Along the way, you get to watch Milioti give one of the most effective comedic performances of recent years; experience a crazed, murder-obsessed J.K. Simmons; and possibly be introduced to the genius of Kate Bush. “Palm Springs” offers you the chance to consider life in a loop and what it might take to learn to cope when the end seems so very out of reach. In the end, it’s a complete delight, one of the year’s best films, and exceedingly worthy of either a first time discovery or revisitation for years to come.