Staff picks: These podcasts will help you escape your pod 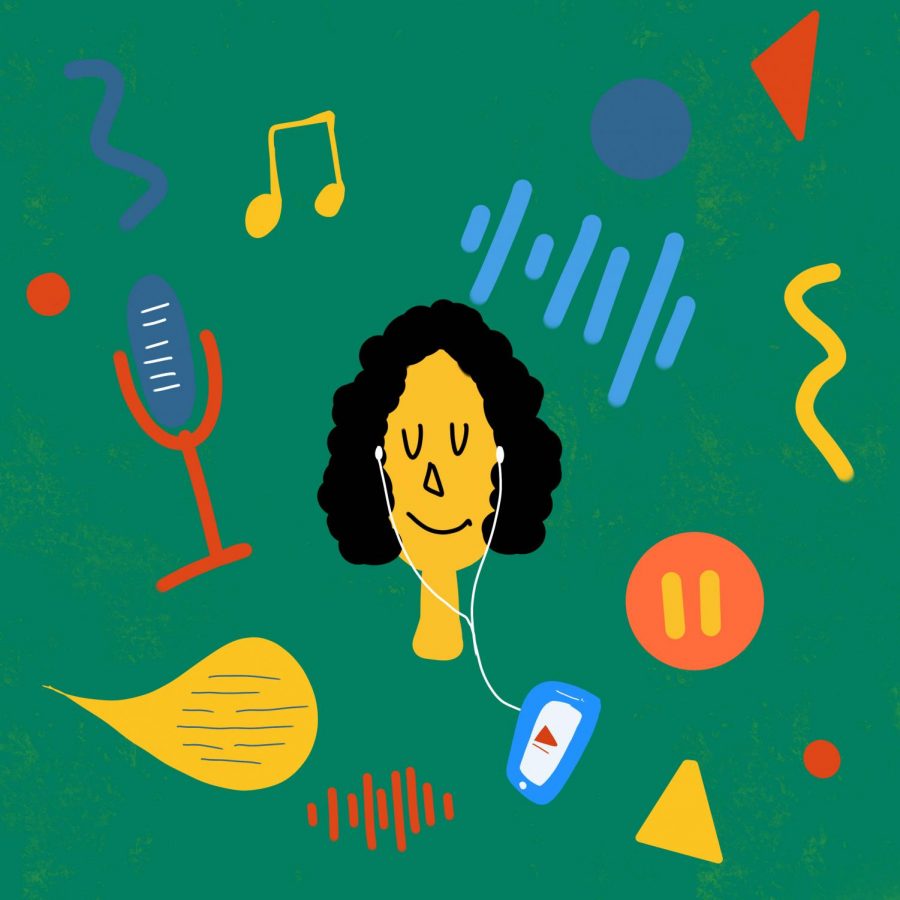 Let’s face it – pod week isn’t fun. No one wants to spend an entire week in one place with only four people as company, but branching out of the pod too early does more harm than good.

If you’re feeling trapped and lonely, don’t go to parties and spread your germs around a South O basement. Instead, try a relaxing evening indoors with one of these podcasts. If you close your eyes and concentrate on the sound of other people talking about musicals, love or the supernatural, it almost feels like making new friends.

As someone who grew up listening to “Jesus Christ Superstar,” “Wicked” and “Guys and Dolls” on long car rides, I love musicals — which is why I love MusicalSplaining from Lindsay Ellis and Kaveh Taherian. Described as “a podcast for people who love musicals (and also for people who hate musicals),” each episode sees Ellis and Taherian, along with the occasional guest, discussing a show they are about to see and giving their thoughts afterward.

For any given episode, you don’t even need to have seen the musical they’re discussing, since the beginning features a run-down of the show. They’ve discussed shows ranging from the classics like “Phantom of the Opera,” to modern shows like “Hadestown” and lesser-known picks like “American Idiot.” Ellis and Taherian have great chemistry and are just a joy to listen to. Everyone even vaguely aware of musicals should give this one a try.

Fellow hopeless romantics, this one’s for you. Collected from submissions to the New York Times column of the same name, “Modern Love” features visceral love stories read by prominent pop culture figures. Each vignette brings the audience on a particular path of love to listen to the writer come to devastating conclusions about their relationships in real time.

Many stories feature traditional romances, some that have ended, some that live on. But other journeys dissect platonic and familial relationships in just as much devastating detail. They tend to get a bit niche, but any listener can find at least a tenuous connection. Meghna Chakrabarti of Boston’s WBUR hosts the show, and she often speaks with the original writer, sometimes years after the column’s original publication. This interaction gives even more life to the story, as listeners get to learn of things that happened outside the scope of the story.

If you dig the premise, but not so much the format, check out Amazon’s original series, also of the same name, with popular columns and more familiar voices.

Macadangdang recommended “99% Invisible,” a podcast about design and architecture that often goes unnoticed. Hosted by Roman Mars, episodes address the packaging of REM’s albums, statues seamlessly incorporated into the New York City landscape and anti-homeless benches designed to be uncomfortable to sleep on.

According to Macadangdang, he enjoys “99% Invisible” because “they take some niche ideas and reveal the importance in a lot of ways.”

Just in case you think you’ve boiled the world down to its simplicity, “Invisibilia” serves as a reminder that you haven’t.

“Invisibilia” looks at all the things we can’t: the invisible forces responsible for shaping the way we think, behave and interact with the world. With such a broad topic, the podcast has a lot of ground to cover, which it does well in varied episodes about anything from patterns and personalities to discerning fact from fiction.

Hosted by Lulu Miller, Hanna Rosin and Alix Spiegel, episodes frequently insert listeners into the lives of normal people facing abnormal circumstances — a widow who can smell diseases on other people, a young boy who remembers details from a past life and a mom incapable of feeling fear. Utilizing in-depth interviews with subjects and researchers, “Invisibilia” tells remarkable stories that keep listeners engaged with suspenseful narration. What’s more, it ponders what insight about the unseen can tell us about our future and how to live.

Have you ever wanted to say, “I’m terrible, thanks for asking” when someone asks how you’re doing? Then this is the podcast for you.

“Terrible, Thanks for Asking” features tragic, awkward and sometimes hopeful stories about what it means to be human. The show was started by host Nora McInerny as a way for her to process her husband’s death from brain cancer. The podcast has highlighted stories from LGBTQ+ folks trying to find their chosen family, assault victims and addicts coming to terms with their trauma and patients processing terminal diagnoses. And while this might all sound depressing, McInerny’s rawness and sarcasm will leave you crying tears of joy.

Not all of the stories have a happy ending — in fact, most of them don’t. But in a time when we’re trying to process a world in constant flux and turmoil, TTFA reminds us that we all must make space to grieve and heal. So whether you’re on a social distancing walk or looking for an escape from your pod mates, “Terrible, Thanks for Asking” is worth the listen.

Any movie fan owes it to themselves to check out “Blank Check,” a podcast hosted by actor and comedian Griffin Newman, of Amazon’s “The Tick,” and film critic David Sims. The “two friends,” as they call themselves, tackle the filmography of one director at a time, from beginning to end, film by film. The episodes are often long, heavy on tangents and a whole heck of a lot of fun. Their subjects range from big name blockbuster directors like Christopher Nolan to somewhat maligned purveyors of romantic comedies like Nancy Meyers (“The Parent Trap,” “The Intern”) to artsier choices like Jonathan Demme (“The Silence of the Lambs,” “Stop Making Sense,” “Beloved”).

Even amongst these wide swings, Newman and Sims are always interesting, engaging and hilarious. With guests covering a multitude of spheres, from comedians like Scott Aukerman (“Comedy Bang Bang”) to filmmakers like David Lowery (“A Ghost Story”) to critics like the always incredible Emily VanDerWerff, the best bet for a new listener is to just scroll through the episode list and find a guest name or a movie that interests you and hop right in! There’s truly something for everyone in the “Blank Check” catalog — including, for Star Wars fans, 10-episode deep dives into each of the prequels from the early days of the podcast. No movie podcast hits the perfect blend of silliness and insight that “Blank Check” does, and now that you know about it, there’s no excuse for not checking it out.

Bonneau said he recently listened to the latest season of “Serial,” called “Nice White Parents.” The podcast itself follows a particular true story each season — “Nice White Parents” addresses school segregation and gentrification in New York City. For any given story, host Sarah Koenig learns about the story alongside her audience, not knowing the ending until the end of the season, according to the series’ Apple Podcast description.

Bonneau said although the story takes place in New York, he thinks it “has applications everywhere.”