Pitt to continue construction on ‘essential’ projects only 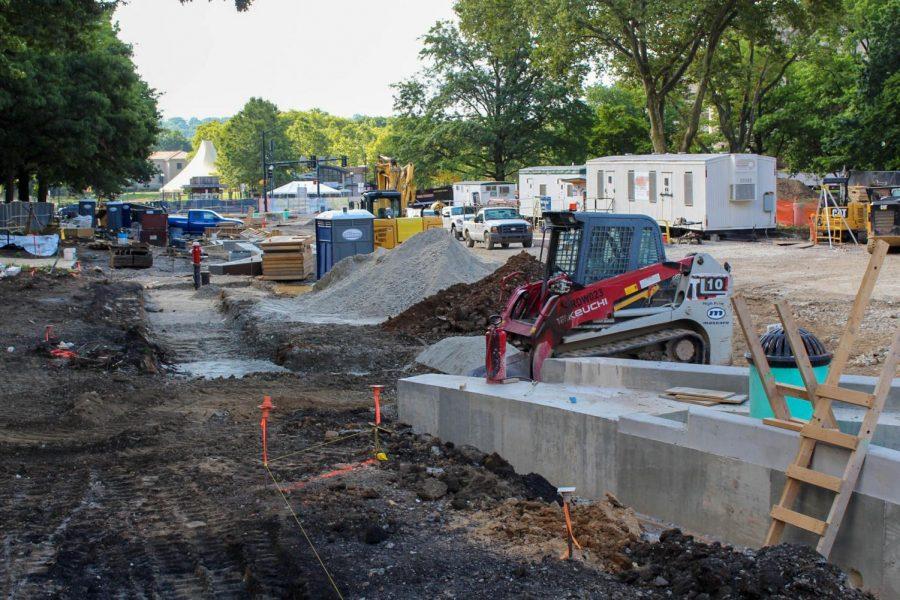 The construction project on Bigelow Boulevard, originally scheduled to finish in August, is now scheduled to be completed in October.

As students continue to navigate moving in and attending lectures online, the one sense of familiarity in these unprecedented times may be the relentless noise of construction on Bigelow Boulevard.

According to Pitt spokesperson Kevin Zwick, the University’s construction projects will take the “most conservative stance possible” in order to preserve the safety of the Pitt community.

“Pitt is only advancing projects that are essential or necessary to maintain the safety of its campus communities,” Zwick said. “As we learn more about the pandemic’s long-term impact, we will reevaluate our priorities and continue modifying project plans accordingly.”

Pitt originally halted all construction activity following an order issued March 19 from Gov. Tom Wolf. But when Wolf instituted another order to resume construction on April 23, many of Pitt’s projects remained on hold.

Here is a list of updates to major projects:

Bigelow Boulevard construction is set to finish in October

The $27-million construction project is now set to finish its third and final phase in October. The project originally had an August completion date, before Welcome Week for incoming first-year students. Financed by Pitt in partnership with the commonwealth and the City, the project finished its first phase in mid-December, which focused largely on the installation of utility lines under Bigelow and boring of utility lines under Forbes and Fifth avenues. The second phase, which was completed in June, included improvements to Bigelow and William Pitt Union’s grounds.

The library’s third floor was originally scheduled to open last spring, before students went on summer break. The floor’s renovation is the latest in the University Library System’s five-year plan to close and remodel one floor each year. Pitt planned to remodel the second and first floors combined after the third floor opened, followed by the ground floor. But according to Zwick, the renovations for the next phase have not gone to the board of trustees for review. Currently, all floors of Hillman are open.

Victory Heights project is on hold

Victory Heights, a $250-million renovation of athletic facilities, includes a new 3,500-seat arena, an eight-lane 300-meter indoor track, multiple practice buildings, a band facility and a strength and conditioning complex. Pitt slated construction of the new arena to begin in summer 2021 with an intended fall 2023 opening. The indoor track and bank complex was on track to open one year later.
A $16.5-million renovation to the Petersen Sports Complex was also underway, which includes adding a third floor and expanding the first and second floor. It will also expand locker rooms, restrooms, training facilities as well as nutrition and sports medicine buildings.
Recreation and wellness center on hold
The hillside area enabling projects on upper campus have resumed and are expected to be completed in May 2021. These include plans to upgrade old power and sewer lines, as well as add more pedestrian walkways and the precursors to beginning construction on a new recreation and wellness center on the current site of the Learning Research and Development Center and the O’Hara Garage. The center was originally scheduled to open in fall 2022 but is currently on hold.
Salk, Scaife halls renovations will continue
The $69-million construction project at Salk Hall includes renovations for the fourth through 11th floors, which currently house the schools of Pharmacy and Dental Medicine. The renovations began in October 2018.
Home to the School of Medicine, Scaife Hall’s $120-million expansion will press on with an estimated completion date of late 2022. The new renovations include construction of a 600-seat lecture auditorium, new classrooms and a new gross anatomy laboratory.
Posvar Hall’s fifth floor renovations are now completed
The $8-million renovation on the fifth floor was originally scheduled to finish in March. Additions to the building include a new floor design and entrance to the School of Education.