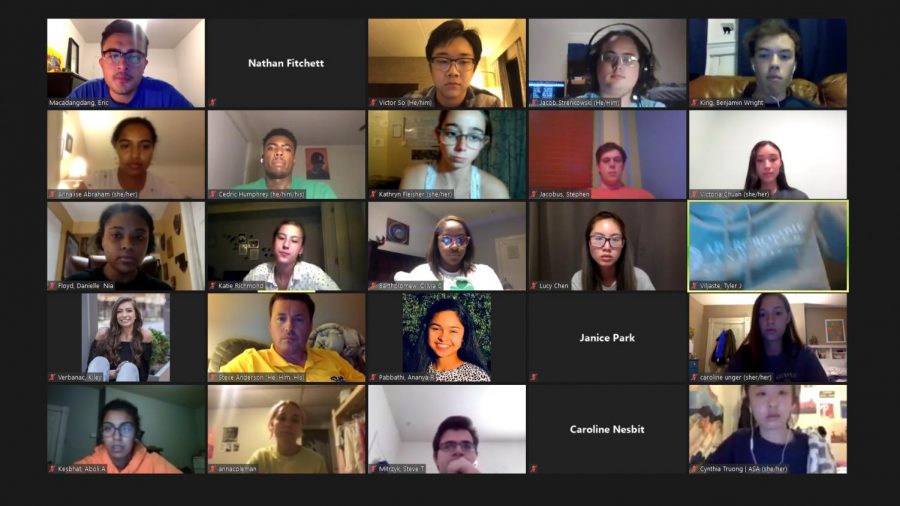 The Student Government Board met Tuesday night via Zoom.

SGB held its first public meeting for the fall semester virtually via Zoom on Tuesday night. Board members reported their activity from the summer semester and presented plans for the fall.

SGB President Eric Macadangdang began the meeting by acknowledging the unprecedented circumstances under which SGB is now operating, due to the ongoing pandemic.

“Since March, SGB, along with practically everyone else, was forced to adapt to a world stricken by a pandemic,” Macadangdang said. “The new board and I were sworn into office via a Zoom webinar, and since then, our working and planning for this year has been entirely virtual. But faced with crisis, we try to find opportunity.”

Macadangdang went over the various policies and accomplishments that SGB worked on over the summer. This included a 20% reduction in the Student Activities Fee, a collaboration with Pitt’s Black Action Society to create a resource guide on how to support the Black Lives Matter movement, the extension of free student legal services over the summer and efforts to help to author the Pitt Community Compact. Macadangdang reaffirmed SGB’s support for the nationwide protests against excessive police force, which will be published as a written statement Wednesday.

Following the opening address by Macadangdang, Executive Vice President Cedric Humphrey began board reports with a statement regarding the Black Lives Matter movement.

“I’d like to start my report by explicitly stating that Black lives matter and calling for justice for George Floyd, Marquis Jaylen Brown, Breonna Taylor as well as countless other victims, which now unfortunately includes Jacob Blake,” Humphrey said.

Humphrey followed by outlining his agenda for the rest of the semester, beginning with discussing the Year of Engagement at Pitt this year. The Year promotes and celebrates the engagement work that Pitt students and faculty participate in every year. Pitt will offer grants to students and student organizations who are doing any work related to student engagement on campus this year.

Humphrey also mentioned his work with fellow board member Kathryn Fleisher to increase lines of communication between the Pitt police and students, as part of an effort to expand accountability for the campus police. Humphrey said he will also push for students who work paid internships to receive academic credit for those internships while still being paid.

Ben King, a board member and the chief of finance, discussed his work over the summer to revise the SGB’s governing code to better reflect the current circumstances amid the pandemic. He introduced these changes as part of Board Bill 2021-1, which is now open to public comment for one week and will be put to a vote at next week’s meeting.

Tyler Viljaste, vice president and chief of cabinet, discussed plans for a new hub for civic engagement on campus. Students were given the go-ahead from Kenyon Bonner, the vice provost and dean of students, to draft a proposal for the new hub a few weeks ago. Viljaste and fellow board members also recently met with new dining services contractor Compass Group to discuss food quality, variety and accessibility at Pitt. This dialogue remains ongoing.

Viljaste detailed his agenda for the upcoming semester, which includes the creation of a task force to continue the long-running process to create an LGBTQ+ student center as well as helping run the First Year Council.

Other members of the board also went through their goals for the upcoming semester. Some notable agenda items include improving mental health resources on campus, the inclusion of a new black studies gen ed, ensuring transparency with the new ad-hoc committee for divesting from fossil fuels and creating a student leader database.

Following the board member’s introductions of their agendas for the semester, the SGB committee chairs reported on their activities over the summer as well as their goals for the upcoming semester. Some important items include working to increase voter registration on campus, engaging students on issues regarding sustainability and racial justice and raising awareness for mental health on campus.

As it was the first meeting of the semester, SGB had no preexisting agenda items to address yet.

Macadangdang concluded the meeting by encouraging students to contact SGB with any concerns during its office hours. He also asked students to make use of the various services provided to students in need this semester and to take care of their mental health.

“Please, please, please take care of yourself,” Macadangdang said. “What’s interesting about traumatizing events is that while you’re going through them, you often aren’t cognizant about it. So please take a step back, even though you’re in front of your screen nearly all day, and relax.”