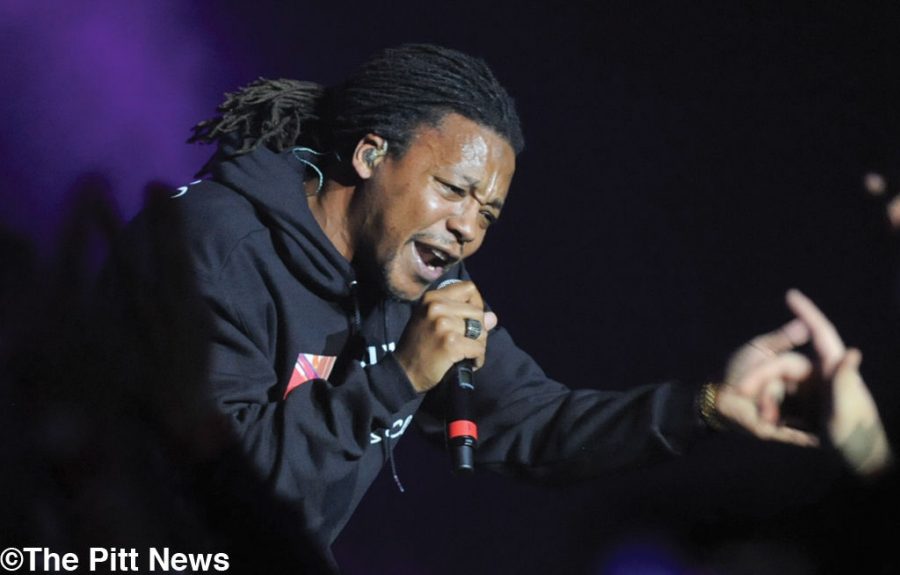 On Saturday night, Lupe Fiasco advised audience members at the Fitzgerald Field House to be more skeptical of the genre that made him famous.

Pitt Program Council booked Fiasco, fresh off the release of his fifth studio album, Tetsuo & Youth, as the headliner for the Spring Indoor Show. An annual event on campus, the show brings in a top hip-hop performer as well as the winner of PPC’s student hip-hop battle, and it has featured Wale, Ty Dolla Sign and Big Sean in recent years.

Fiasco, who has been very outspoken on issues of race, rap and his fading relevancy during the past few months, didn’t keep his opinions off the stage.

When the attendee responded, “Yes, yes and I couldn’t hear you,” Fiasco seemed to take offense.

“Then how the f*ck could you like that song?” he asked.

He then took a moment to address the crowd with a statement on the current monetization of violence, drug dealing and degradation of women.

“It might not be tonight — matter of fact, it won’t be tonight — but one day, hopefully one day, you’ll all realize what’s right and what isn’t right to party and dance to,” Fiasco said.

The socially conscious rapper began his set on a somber note, dedicating the performance to a young Chicago resident, Antoine, who was murdered two weeks ago.

“Sometimes kids from the hood, they see guys like me, and it’s like they ask me for help — to do things for them,” Fiasco said, before recalling an instance in which he regrets not doing more to help.  “Two weeks ago, my nephew’s best friend was shot in his head in front of his mother’s house. This show is dedicated to him,” Fiasco said.

Fiasco started the show with veteran bravado and consciousness.

He began the evening with the jazzy and powerful “Around My Way (Freedom Ain’t Free),” a song that he dedicated to the injustices of the world. Lines like, “it’s parts of Manila like the video for ‘Thriller’/ But the U.S. Embassy is reminiscent of a villa/ If poverty is chocolate and privilege vanilla,” address some of the same problems Fiasco tackles on his most recent project.

Keeping his promise to students in the front rows, who had requested to hear songs off Tetsuo & Youth, Fiasco transitioned into “Deliver,” a single detailing the violent and problematic state of Chicago’s inner city.

Despite his preaching, the crowd sang along to classics like “Kick Push,” “Superstar” and “The Show Goes On.”

Before Fiasco’s set, the night was a lot less weighty, with performances by Pitt student group Tory Hains and comedy-rapper Lil Dicky.

Dicky, a viral comedy rapper, performed a collection of mundane, absurd and vulgar songs that will appear on his debut album Professional Rapper. The crowd laughed and groaned as Dicky stripped down to his boxer-briefs for a risqué performance of his hit single “Lemme Freak.” Few knew the words, and some begged for Fiasco’s arrival, but Dicky brought immaturity, charisma and all-around chaos — which was a sharp contrast to Fiasco’s purposeful rhymes.

Although Fiasco wasn’t afraid to give some lessons, his performance — much like his studio albums — was a powerful blend of thoughtful and entertaining rap.