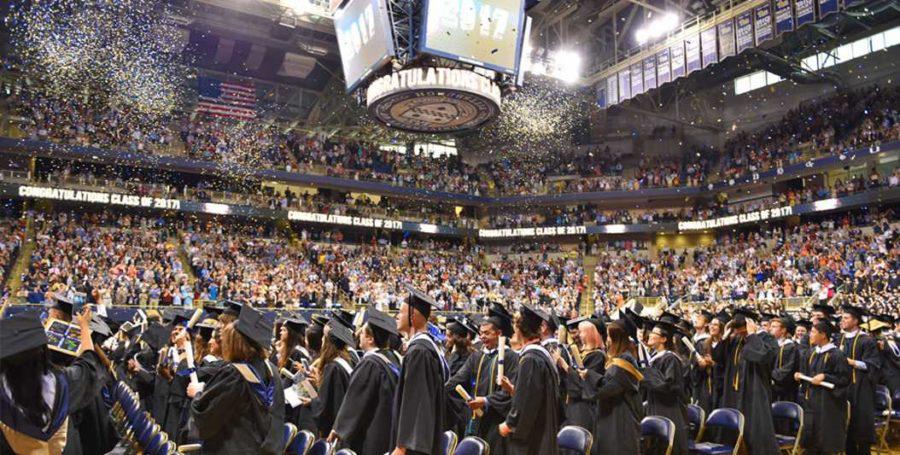 Courtesy of The University of Pittsburgh

Some Pitt students have struggled to secure a job after they graduated in the midst of the COVID-19 pandemic.

One of the greatest challenges at the end of college is securing a stable job after graduation. According to Sophia Cosentino, a 2020 Pitt graduate, this is even more daunting during the COVID-19 pandemic.

“There’s a really helpless feeling that I think a lot of people experience in the midst of [the pandemic] that I think is really amplified in the job search process,” Cosentino said.

And Cosentino isn’t the only recent college grad struggling. According to NBC News, entry level job postings are down 68%.

Cosentino, who has a degree in human resources, originally had a job lined up in finance at Pitt’s Swanson School of Engineering, where she worked as an undergraduate student. But once the coronavirus pandemic hit, the administration decided to fill her position with someone internal, leaving Cosentino without a job.

“I was kind of back to square one,” Cosentino said. “I was then looking for a job from then to a couple weeks ago.”

She said being unemployed during the pandemic poorly affected her mental health and worsened her anxiety. She said it was challenging living at her parents’ house while searching for a job.

“I struggle with anxiety and the entire job search process was really difficult with that,” Cosentino said. “You always feel like there’s more that you can or should be doing. I think it was really easy to feel purposeless and feel discouraged.”

Luckily, she was able to find a job in research administration at Hillman Cancer Center that began about a week ago. That search came with its own set of hiccups, though. Cosentino highlighted her frustration toward the interview process, where she said she was given false hope by several companies.

“I did a phone interview and the recruiter immediately gave me really positive feedback and said how interested they were in me,” she said. “But when I asked about next steps or asked if they had any timelines for the hiring process, they said they weren’t really sure and I usually didn’t ever hear from them again.”

Cheryl Finlay, director of Pitt’s Career Center, said her office is still a resource to students looking for jobs or interview preparation with virtual consultations and career fairs, alumni and nonprofit panels and workshops. Finlay said during this difficult period, it is important that graduates stay engaged in their job search and network with potential employers.

“We are also helping students focus more on skill building, staying active, keep seeking knowledge while they continue to look for jobs,” Finlay said. “Networking is now more important than ever. Fewer jobs are out there and competition is tough.”

The interview process has not been entirely smooth sailing for other Pitt grads either. James Galloway, a 2020 graduate with a degree in natural science, said one of his potential employers did not properly follow CDC guidelines.

“One of the jobs I interviewed for was at a local store in town and nobody was wearing masks,” he said. “I went through that interview but did not take the position they offered me because I didn’t feel safe.”

Galloway said he faced difficulties finding a job for the fall, but finally accepted a position as a packer and canner for a Colorado brewing company as a means of job security.

“That was a big debate I had,” Galloway said. “Do I take job security over location and what I want to be doing?”

Some alumni were fortunate to have secured jobs before graduation, proving helpful once the pandemic hit. Elise Molinaro, a 2020 graduate with a degree in finance, said she got her current Philadelphia job in public finance issuing municipal debt for city entities in November.

“Business usually accepts early and that was the case for me, so I was really thankful to have that stable offer,” Molinaro said.

This doesn’t mean starting a job entirely remote is ideal though. Molinaro said one major negative is not experiencing typical interactions with her colleagues.

“I really miss in-person interactions that I could have with people,” she said. “I’m not getting the full extent of networking and social interaction that I would have liked.

Molinaro did note some positives to remote working. She said she is more focused and better able to study for tests and quizzes for her job’s training program.

Other graduates were able to start their jobs as well, but in abnormal circumstances. Grant Larson, a 2020 graduate with a microbiology degree, is working in a research position at Massachusetts General Hospital.

Larson said his job has been operating relatively normal in-person, as the hospital reopens for elective procedures.

Larson added that he is grateful he was able to find a job in biology, since many labs have shut down or lost funding due to the coronavirus. He stressed the importance of helping out during this time, no matter your career aspirations.

“Even if it’s not somebody associated with your career, it’s just finding ways you can serve the community even when everything sort of got shut down in any way that you can,” Larson said.