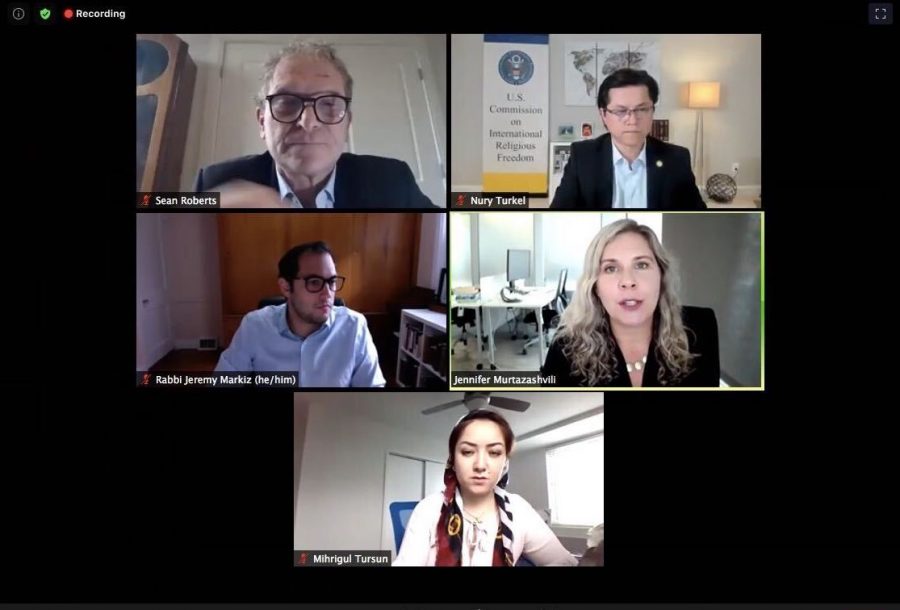 Pitt’s centers for Governance and Markets and Russian, East European and Eurasian Studies, as well as the Islamic Center of Pittsburgh and Congregation Beth Shalom, all collaborated to host a virtual event Tuesday to raise awareness about the geneocide of Uyghur Muslims in China.

Mihrigul Tursun tearfully recalled on Tuesday the torture she suffered in the Uyghur Muslim concentration camps in Xinjiang, China.

Tursun shared her story during a virtual event hosted by Pitt’s centers for Governance and Markets and Russian, East European and Eurasian Studies, as well as the Islamic Center of Pittsburgh and Congregation Beth Shalom. The organizations held the event to raise awareness about the ongoing genocide of Uyghur Muslims in China.

The Chinese government has detained at least 800,000 and possibly more than 2 million Uyghurs in “reeducation centers,” marking the largest mass internment of an ethnic-religious minority group since World War II, according to The Guardian. In the camps, Uyghurs are forced to undergo psychological indoctrination programs as well as physical torture, including waterboarding and sexual abuse.

Tursun was born in East Turkistan, also known as Xinjiang, in 1989. She studied in a Chinese school, before moving to Egypt, where she married and gave birth to triplets. Tursun said she returned back to China so her parents could meet her children. But when she arrived at the airport, Tursun said the Chinese police separated her from her children, handcuffed her, put a black sack over her head and questioned her for three hours before taking her to a prison.

“I didn’t know what was happening to my kids,” Tursun said. “They were only 45 days old. They needed to be fed. My kids need me.”

Tursun said she was notified that her children were in the hospital a few days after being taken to a camp. When she arrived at the hospital, she said a doctor told her that all three of her children had an operation on their necks, but prevented her from seeing them.

“You cannot see them, they told me. I was blacklisted and just came from prison,” Tursun said. “I am not important.”

Tursun said the police gave her the dead body of her oldest son the next day. Tursun believes he was dead for at least three days before she was released from the camp to visit the hospital.

Tursun added that she was then immediately detained by police and taken to a camp for the second time. This time she was questioned by the police, tortured, subjected to electric shock and physically abused for three days.

“While being tortured, I muttered, ‘Oh Allah,’ accidentally, which means ‘help me God,’” Tursun said. “They told me the Chinese Communist Party had more power than Allah. They told me Allah could not save me.”

Tursun also talked about the everyday indecencies of the camp. She remembered a white pill she was forced to take every two hours that made her feel numb. The Chinese police only allowed her to drink water after she took the pill, though.

She also recounted the room she slept in with 68 other women, which she said was so small the women had to take turns sleeping. Tursun said her feet were tied and her hands were handcuffed to her feet while she slept, which still affects her today.

“Even now my back, wrists and feet are in pain,” Tursun said. “Even now, I cannot sleep normally. I feel as if I might die.”

Tursun said witnessing death and torture was not uncommon in the camps. According to Tursun, in the three months she was in a camp, she saw nine women die. She said she met one woman who was imprisoned for 19 months.

She added that she saw many familiar faces in the camp.

Nury Turkel, the commissioner of the U.S. Commision on International Religious Freedom and co-founder of the Uyghur Human Rights Project, agreed. Turkel — who escaped a camp with his mother in 1995 — said while the Chinese government claims it’s fighting against terrorism, those imprisoned are not criminals.

“Half a million Uyghur Muslim children have been taken away or separated from their parents,” Turkel said. “Fathers looking for their kids recognize their faces on Chinese state-run propaganda material.”

Turkel said the accounts of torture by survivors like Tursun are clear evidence of genocide.

“There’s been an 80% decrease in Uyghur population growth in three years,” Turkel said. “Something horrific is happening.”

Tursun said she was eventually allowed to return home, but was constantly watched by two Chinese police officers. They lived, slept and ate with her and her family. Tursun said the police told her that if she told her parents about the torture, they would be subjected to the same treatment.

“My father said, ‘I remember your hair used to be beautiful,’” Tursun said. “I did not know how to tell him why I did not have hair. They took my hair.”

After she visited her parents, Tursun was then taken to prison for a third time where she was threatened with life in prison. She said she begged for her young kids to be sent to Egypt and was released to travel with them. But the Chinese government forced her to sign an agreement and film a video saying that she was not tortured in the camps.

“If I said anything, they would show my video,” Tursun said. “No one will believe you, they told me.”

Tursun eventually sought asylum in the United States, where she lives now. Tursun said her family was forced to denounce her publicly after she left China, so she hasn’t seen or heard from them in years.

Tursun said remembering these details are difficult, causing her to tear up for most of the event.

“It is not easy to talk about what happened to me,” Tursun said. “Each time I talk about this I remember this time. I have lost everything.”

While these camps are located thousands of miles away, Jennifer Murtazashvili, the director of the Center for Governance and Markets, said Pitt administrators can help by sponsoring similar events.

“We had hoped for greater support within the University community for this event, especially considering the many University conversations we’ve had in recent months about diversity and how state power can be used unjustly against minority communities,” Murtazashvili said. “Some administrators were silent when asked for co-sponsorship, while others felt that it was too sensitive a topic.”

Turkel said the best thing students can do to show their solidarity with Uyghur Muslims is contact their representatives and urge them to support the Uyghur Forced Labor Prevention Act, which would prohibit certain imports from Xinjiang, where the concentration camps are located. It would also impose sanctions on the people responsible for the human rights violations.

“If this doesn’t move you to take an action,” Turkel said, “I don’t know what will.”