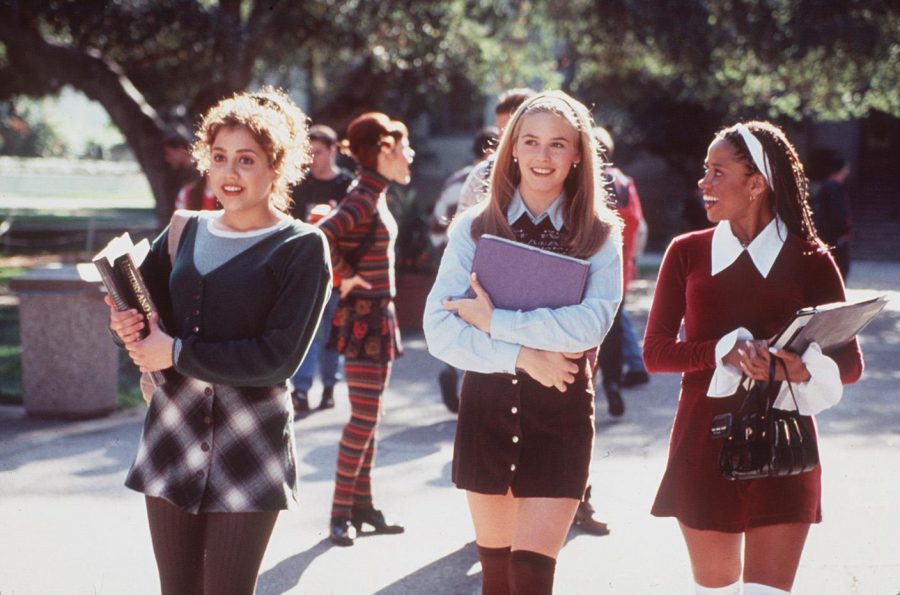 This weekend, we’re going back to when things smelled like teen spirit. We’ve got streaming recommendations straight from the ‘90s.

“Clueless” is potentially the ultimate ‘90s movie — the costumes are iconic, the ridiculous LA high school is enviable, and the slang is, like, “totally buggin.” Everyone knows at least two sorority sisters who dressed up as Cher and Dionne for Halloween — the costumes in this movie are recreated and referenced in pop culture all the time.

Alicia Silverstone as Cher is the perfect balance of spoiled suburban babe and witty, incisively funny comedic actor. Her speech about the “Haiti-ans” is one of the best, most oblivious moments of the whole movie. Cher isn’t relatable, and her life is mostly complicated by crises of her own making, but she is by turns sympathetic and enviable.

Her character is matched by her best friends, Dionne and Tai, and challenged by her stepbrother-turned-love-interest, Josh (it’s not incest, it’s just icky). Cher, Dionne and Tai have impeccable comedic timing, and their ability to deliver ridiculous lines with complete sincerity makes “Clueless” endlessly quotable — every time I fail to parallel park the voice in my head goes “you’re a virgin who can’t drive.”

Even though the high school drama is very ‘90s, Cher’s moral crisis about her own privilege feels like it was written yesterday (by an oblivious and well-meaning white girl, but still). Her inner monologue about whether or not she’s a good person is one of the most underrated parts of the movie, and her sincerity and self-seriousness is really funny.

Cher might take herself very seriously, but “Clueless” doesn’t, and it leans into the comedy part of rom-com. It straddles the line in a way that few teen movies do so successfully, and is more successful and more watchable because of it.

Saban’s “Power Rangers” series is an American adaptation of the Japanese series “Super Sentai” made by mixing footage of American (or New Zealand in the case of later seasons) actors with Japanese footage of people in colorful spandex suits fighting bulky monsters with horrific pun names. The first five series, including “Mighty Morphin’ Power Rangers,” “Power Rangers: Zeo,” “Power Rangers: Turbo,” “Power Rangers in Space” and “Power Rangers: Lost Galaxy,” make up a continuous story that aired from 1993-1999, and the series is glorious. They’ve got the ‘90s fashion, terrible puns and a level of optimism for the future that we can only dream of in 2020.

The ‘90s era of the show is a joy to watch, with a really engaging plot of the ongoing battle between the forces of good and evil. A plot that happens alongside episodes where characters get baked into giant pizzas, but that just makes it even better. Seriously, this show is an absolute joy to watch, though the earlier episodes take a while to find their footing. And if you enjoy it enough, feel free to leave the ‘90s behind and check out later seasons!

So everyone’s here to recommend a rom-com, a Disney classic, all the staples of an American Millenial/Gen Z pop culture education, but it would be a travesty to leave out the Japanese Studio Ghibli and what is probably one of its best feature films, “Princess Mononoke.” Studio Ghibli, for those that don’t know, is one of Japan’s most successful animation studios and has been producing anime films since the late ‘80s, headed by the wonderful, fantastical Hayao Miyazaki. “Princess Mononoke” is his 1997 picture, a love letter to the feudal era of Japan complete with demons, wolf princesses and a really touching message about the environment and the battle between human beings and the planet.

The movie’s star, a banished prince named Ashitaka, travels far from his homeland on a search for the demon who cursed him and comes across a metal-making village at war with the forest spirits inhabiting the mountains. There he meets San, the titular Princess Mononoke, who has been adopted by the wolf clan and wages her own one-woman war against the people of the village, whom she believes are the root of all evil in the world.

The movie isn’t all black and white. It’s very easy to point fingers when talking about the environment, and while I’m sure most of us can agree that destroying our resources and driving out all the native species of an ecosystem isn’t great, “Princess Mononoke” also gives you an insight into the reasoning why people do these things. It’s not always malicious — sometimes this job is a better opportunity for people previously impoverished. “Princess Mononoke” is not only a beautifully animated and rendered film — it’s a brain piece, the kind of movie that leaves you sitting in the dark after you finish, your mind running a mile a minute and your heart a little bit heavier.

Even though many people fell in love with the 2019 version of “Aladdin” with Will Smith and Mena Massoud, this musical madness first hit screens in 1992. The film follows Aladdin, originally voiced by Scott Weigner, an Arabian street punk who disguises himself as a wealthy prince to win the heart of Princess Jasmine. As the film follows Aladdin and his complicated journey to Princess Jasmine’s side, he’s accompanied by a genie, played by the late Robin Williams, and his furry friend Abu.

The plot itself is enjoyable enough, but it wouldn’t be a Disney movie without some musical magic. With only seven songs throughout the film, musicians Alan Menken, Howard Ashman and Tim Rice composed the perfect songs to fit the Arabian-style movie. The most popular songs include “Prince Ali” and “Friend Like Me,” which makes the audience sing and dance along with the characters. You also can’t forget about the film’s most famous song “A Whole New World,” sung by the two star-crossed lovers. There’s no doubt that when you watch a Disney production, the soundtrack gets stuck in your mind and you catch yourself singing it around the house. The musicality in “Aladdin” is timeless as the much-beloved ‘90s tale hit screens again 27 years later to the tune of one billion dollars. To this day the message of friendship and being true to yourself lives through the music that “Aladdin” has created for many generations of Disney lovers to watch and sing along.

Most people know Ridley Scott as the visionary behind sci-fi classics like “Alien” and “Blade Runner.” And most people have probably heard a reference to, if not seen, the heart-stopping ending of “Thelma and Louise.” But rarely do people connect the two, although Scott’s craftsmanship that created icons out of Ellen Ripley and Rick Deckard is no less great in this landmark 1991 feminist film. The always-commanding Susan Sarandon and spirited Geena Davis give spellbinding performances as best friends caught in a Southern whirlwind of crime and self-liberation.

Set in Arkansas — masterfully captured in all its perpetually orange glow — the film follows Thelma and Louise, who embark on a weekend road trip in escape of their humdrum lives. Of course, things go awry, and before long the two best friends are burning rubber and leaving desert dust trails in the face of the police. Far from a frivolous road trip movie, Scott creates a genuinely moving film with a glorious ending that, if you haven’t seen it, will leave you weeping and cheering. And if you’re in need of some saccharine ‘90’s guitar, look no farther than Hans Zimmer’s sun-soaked score. Plus, check out the role that put Brad Pitt on the map — cowboy hat, blue jeans and all.

Writer/director Paul Thomas Anderson has become one of the most — if not the most — acclaimed filmmakers in the world in the 21st century, placing in countless end-of-decade or century-so-far best-of lists with any and all of his films from 2002’s “Punch-Drunk Love” to 2017’s “Phantom Thread” (the latter takes a spot very high on my own list for the 2010s). Right before the turn of the millennium, though, he was riding the wave of 1997’s “Boogie Nights,” a sprawling tonal mish-mash of a postmodern (that so-essential ‘90s descriptor) epic. For “Magnolia,” his follow-up, he decided to amp up all of those aspects and layer on biblical allusions, a screaming Tom Cruise in full sleazebag mode and another half-hour’s worth of movie. It’s wonderful. It weaves through a number of storylines taking place all across Los Angeles and featuring at least half of the time’s most iconic and interesting performers, both stars and character actors (the aforementioned Cruise, naturally, but also Philip Seymour Hoffman, Julianne Moore, William H. Macy, John C. Reilly and so many more) with dexterity and grace, tying them together explicitly or implicitly as it sees fit.

When “Magnolia” stops for a second for a wistful, intercutting musical number about halfway through its 188 minutes, it seems like a completely natural step — and it is, as Anderson establishes a clear voice and cuts through his sprawling set of tonal landmarks with it, never faltering, always on the mark with the voice of a real, human person. Falling into the hyper-connected lineage of Robert Altman’s early-90s masterwork “Short Cuts” and anticipating films of the 21st century on similar thematic lines like the Wachowskis’ and Tom Tykwer’s “Cloud Atlas,” “Magnolia” closes out the ‘90s with what feels like a perfect summary of their very essence, self-reflexive and steadfastly unwilling to be ever be consistent. Even free of this context, it’s a piercing, affecting work of art, well worth its runtime and hours beyond.