Panthers in the Pros: Who to watch out for entering 2020 NFL season 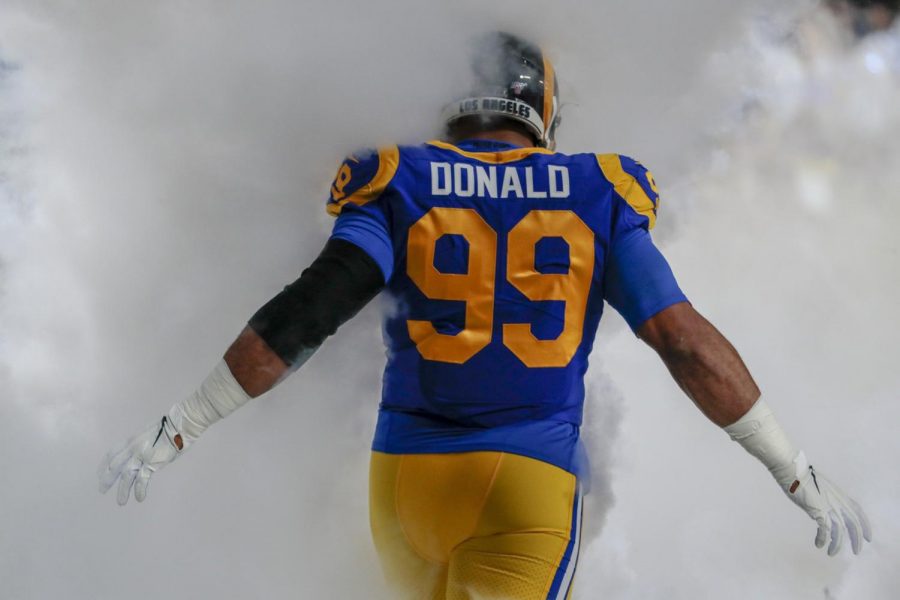 Los Angeles Rams defensive tackle Aaron Donald is shrouded in pregame fog before taking on the Seattle Seahawks at the Los Angeles Memorial Coliseum on December 8, 2019.

While Pitt football hasn’t gotten past the eight-win mark since 2009, the program consistently produces professional talent.

A plethora of great NFL players have come out of Pitt, including nine hall of fame inductees. Here are the former Panthers who should attract the most attention entering the 2020 season.

The Rams drafted Donald in 2014 after a stellar college career. The five-time All-Pro, two-time Defensive Player of the Year and No. 1 player on the NFL’s 2019 top-100 players list has recorded double-digit sacks in each of the last three years, forcing 11 fumbles. Donald has emerged as the most dominant and feared defensive force for years now, and that won’t change going into his seventh season.

The Rams enter Brandon Staley’s first season as defensive coordinator with one of the most unproven linebacker groups in the league. Regardless of what the Rams as a team do, expect Donald to put up double-digit sacks once again, and 15 plus tackles for loss to go along with it.

“Larry Legend,” entering his 17th year in the NFL, remains an elite receiver at the professional level. With 29 dropped passes over his 16-year career, Fitzgerald has the best hands of any wideout to ever step on the field.

However, the Cardinals picked up superstar wideout Deandre Hopkins this offseason, and Christian Kirk emerged as quarterback Kyler Murray’s primary target at the end of last season. Even as the third option in the Cardinals offense, expect Fitzgerald to put together another 65+ reception and 700+ yard campaign with a few touchdowns to boot. One of the most consistent wide receivers around, count on Fitzgerald to produce consistently this year.

Boyd has really come into his own over the last two seasons. He stepped up in Bengals star wide receiver AJ Green’s absence, posting career highs in targets, receptions and yards in 2019. Whether Green returns to the lineup this season or not, Boyd has proven himself as a dangerous weapon in the Bengals offense. I expect another 1,000-yard season from Boyd with over 85 catches and a handful of touchdowns. If Green plays, it will create better matchups for Boyd. If he doesn’t, Boyd will see another rise in targets.

Although not the most glamorous position in football, offensive tackle remains one of the most important, tasked with fending off some of the best edge rushers in football. Despite facing elite NFC North pass rushers like Trey Flowers, Preston Smith, Za’Darius Smith and Khalil Mack in 2019, O’Neill only allowed one sack in 967 offensive snaps played. I envision O’Neill having another strong season as he continues to develop as a blocker.

In his first season, Conner backed-up Steelers running back Le’Veon Bell, totaling only 32 carries in 14 games. Conner responded with a breakout sophomore year, earning himself a spot in the NFL Pro Bowl. After an injury-ridden third-season slump, Conner appears poised to bounce back strong this year, with added offensive weapons like wide receiver Chase Claypool and tight end Eric Ebron taking pressure off the Steelers run game.

A 2014 Pitt graduate, Williams has soaked up all of the knowledge he can from the defensive backs out in San Francisco, nabbing a career-high two interceptions and forcing four fumbles in 2019. Pro Football Focus ranked Williams in their preseason top 25 cornerbacks list this year, with the former Panther emerging as one of the most reliable slot corners in the game. Look for Williams to build upon his strong 2019 season for an explosive 2020.

A fourth-round pick, Jordan Whitehead has exceeded expectations in his first two pro seasons. Whitehead’s nine passes defensed in 2019 ranked just outside of the league’s top 50, He also racked up nearly 70 total tackles with an interception in 2019, showing flashes of brilliance in his sophomore season. Whitehead will take another step forward this year, as he gets more comfortable each game in the Bucs defensive scheme.

After a strong rookie season with breaking up four passes and making 35 tackles, Maddox racked up double-digit passes defensed and 47 tackles in 2019. Philadelphia’s injury report currently lists Maddox as “day-to-day,” but many NFL executives expect him to succeed in his adjustment to boundary corner once he returns to full strength.