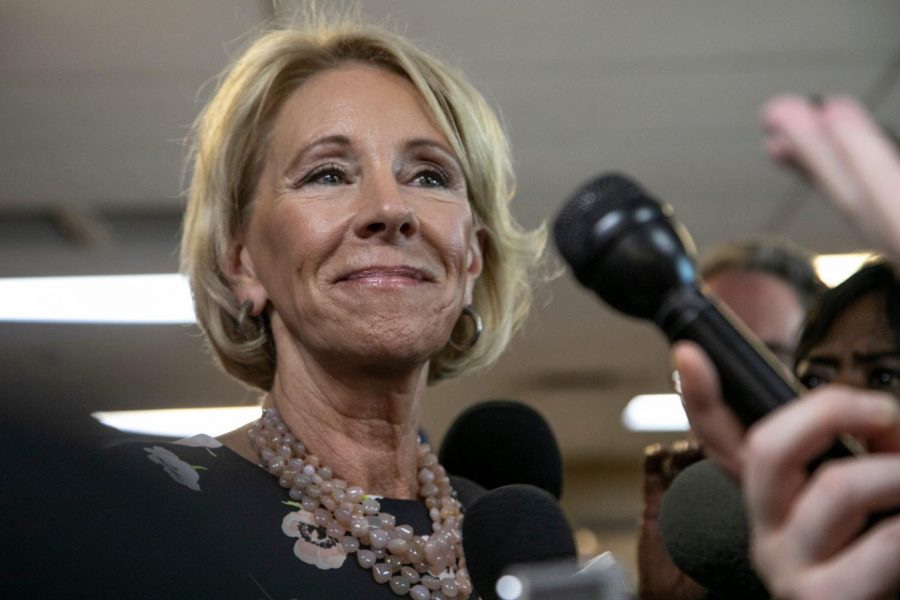 Pitt’s Title IX office has implemented a number of new controversial changes announced by Secretary of Education Betsy DeVos, meeting the federal government’s Aug. 14 deadline and drawing concerns from some students and Title IX officials in the process.

Pitt’s Title IX office has implemented controversial new federal Title IX regulations — meeting the federal government’s Aug. 14 deadline — despite strong opposition from some University officials. Carrie Benson said she has many concerns about the new rules, but her office will comply with them.

“We want to be transparent in saying that we think the changes are problematic, but they are federal law,” Benson, the prevention and education coordinator in Pitt’s Sexual Violence Prevention Office, said. “The health, safety and wellbeing of our students is our first priority.”

The rules, which the U.S. Department of Education finalized in May, made several changes to Title IX operations. One of the changes includes offering live hearings and cross-examinations of survivors by the accused. The federal government has also introduced a more narrow definition of sexual harassment, doesn’t require colleges to follow a specific timetable in responding to reports and doesn’t require colleges to respond to off-campus alerts unless it is an officially recognized student or institution organization, such as a fraternity, sorority or athletic housing.

Since the federal government announced the Aug. 14 deadline, Pitt has worked on an implementation strategy to be in compliance with the new rules. Pitt joined a number of universities in requesting a longer implementation timeline in May, and the state attorney general joined a multi-state lawsuit against the new regulations at the end of June.

Benson said the University struggled to implement the new regulations in the middle of the COVID-19 pandemic, but she thinks Pitt was successful.

“The University had a little over three months to read, interpret and understand a way to implement these new regulations, during a global pandemic,” Benson said. “But we’re confident we will comply with them while still maintaining a high level of support for students, faculty and staff who turn to us.”

Pitt did incorporate a new sexual misconduct policy into its implementation strategy for the new regulations, though. Benson said this policy will address any incident of sexual assault or harrasment not covered by the new Title IX rules, ensuring that members of the Pitt community are held to high standards of behavior.

But some students said they were not convinced Pitt’s new policy will be enough to protect survivors. Claire Lapat — president of PittUnmuted, a club focused on providing a safe space for sexual assault survivors and raising awareness about the problem of assault — said she and club members are worried about the new, “terrifying” changes. Lapat said even though she considers Pitt to be a progressive university, she thinks the new rules will disproportionately affect minority students and those in the LGBTQ+ community.

“The definition of sexual harrasment or sexual assault has been narrowed so much that it doesn’t include everything,” Lapat, a junior microbiology major, said. “It doesn’t take into account that people are not all straight and cisgender.”

Lapat added that she thinks these rules will invalidate many survivors’ experiences.

“It’s going to delegitimize their experiences even more than it already has,” Lapat said. “Which is unbelievable because it was already so bad before.”

Lapat said she hopes that Katie Pope, the head of Pitt’s Title IX office, and her team will still offer University and community resources to help survivors despite the new rules.

“The Title IX office is really good at providing resources,” Lapat said. “I think if people know that she wants to help you to the capacity that she legally can, that they’ll go to her or anyone in the Title IX office.”

Benson said any student can report an incident of sexual assault or harassment to the Title IX office by calling 412-648-7860 or emailing [email protected].

“We can talk to you about what your safety options are, if you want to talk to police and file a report or file a formal complaint,” Benson said. “We want to move forward in a way you’re comfortable with, and ensure you’re supported and guided through the process.”

Lapat said she is worried that because of the changes, people won’t feel comfortable reporting incidents of assault or harassment. She said she fears underreporting may empower perpetrators of sexual assault and expects a rise in sexual assaults on campus in the future.

“[Assaulters] know they could do it and get away with it,” Lapat said. “The next time there’s a campus climate survey, whatever the number was, I would expect it to be higher.”

The Association of American Universities released a 217-page report last fall examining the current state of sexual assault and misconduct on 33 university campuses, including Pitt. The report found that since entering college, in situations involving physical force or the inability to consent or stop what was happening, 11.2% of respondents at Pitt said they experienced penetration at least once and 16.7% of respondents said they experienced sexual touching at least once.

After the report’s release, Pitt established the Sexual Violence Prevention Office within the Office of Diversity and Inclusion, formed a 12-member council to address issues of sexual assault and harrassment on campus, allocated $54,000 in Pitt Momentum Fund grants for research into preventing sexual misconduct and launched a special $250,000 cycle of Pitt Seed funding to help address the issue.

Mary Roche, a 2020 Pitt alumna and former Sexual Assault Facilitation and Education peer educator, said she has similar fears about possible underreporting due to the new changes.

“That’s one of my biggest concerns,” Roche said. “Are people even going to report?”

Roche, who currently works in outreach and prevention work for sexual assault around Boston, said she is also concerned about how COVID-19 will affect Pitt’s Title IX office.

“That’s another concern, how is Title IX going to work in the realm of COVID on top of these regulations that are already trying to be put in place,” Roche said. “I just worry that this is an issue that may just be on the backburner now because of the circumstances.”

Benson said she shares concerns about a decrease in reporting, but emphasized that the new changes will not stop the Title IX office from providing services to survivors.