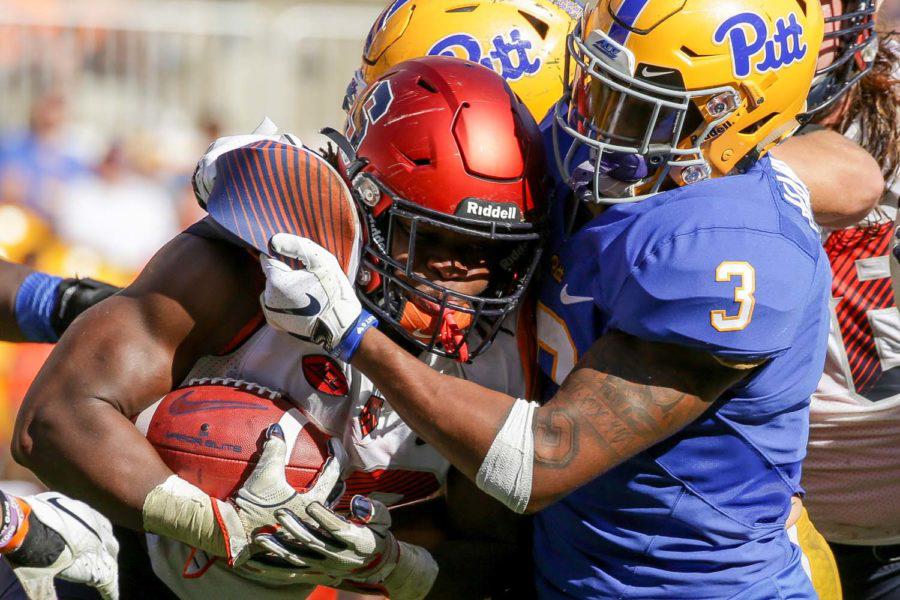 Senior safety Damar Hamlin (03) tackles Syracuse running back Jarveon Howard (28) during the 2018 matchup with the Orange at Heinz Field.

College football is back — the first eight FBS games of the season took place this weekend, giving fans a glimpse of what a season amid the COVID-19 pandemic will look like. While the nation’s most prestigious conference, the SEC, won’t kick off until Sept. 26, the ACC and Big 12 will debut the first Power Five conference games this week.

Here’s how the ACC’s teams stack up heading into a year like no other — from first to worst — with each team’s 2019 record and Odds Shark chance to win the 2020 ACC Championship.

While I changed my mind repeatedly about each team’s order in the rankings, this one is a no-brainer. Junior quarterback Trevor Lawrence enters 2020 with a 25-1 record as the team’s starting signal-caller, his lone loss coming in the 2019 national championship after steamrolling his way to a perfect ACC record last year. Aside from a one-point victory at North Carolina, the Tigers won every conference game by at least 31 points.

Within the return of Lawrence and senior running back Travis Etienne, head coach Dabo Swinney’s proven leadership and a dominant defensive line, the Tigers have their sixth-straight conference title lined up perfectly.

For the first time in school history, the prestigious Notre Dame football program will compete as a member of the ACC this year, even if only temporarily. The Fighting Irish boast an offensive line with unparalleled experience, which will allow senior quarterback Ian Book to flourish in his final year of eligibility. They will play Duke straight out of the gate, a perfect opportunity to secure a confidence-building ACC blowout to start the year.

New year, same story. ACC media has slept on head coach Pat Narduzzi’s squad once again, with the Panthers coming in eighth in the preseason poll. Pitt senior co-captain Damar Hamlin, who contributed to one of the nation’s toughest 2019 defenses, expressed his team’s response to the news.

“We definitely take it as disrespect,” Hamlin said, “And they’re going to see about it.”

Although the preseason losses of Jaylen Twyman and Damarri Mathis will sting, Pitt should turn heads with another stout defense — and hopefully a somewhat consistent offense — that can build off of a strong 2019 season. Don’t be surprised if Pitt sneaks its way into its second conference championship appearance in the last three years.

The only ACC opponent that gave the Tigers a scare in any way in 2019 — just a failed two-point attempt away from the upset — the Tar Heels’ record didn’t do the team justice. All six Tar Heels losses in 2019 came by a touchdown or less, making it a frustrating year of what could have been.

Sophomore quarterback Sam Howell put together a terrific first-year season with 38 touchdowns to only seven interceptions last year. As Howell develops, UNC will begin to close out those tight games and see a significant boost in the win column.

The Cardinals put together an impressive 2019 campaign in head coach Scott Satterfield’s first year at the helm. The Cardinals returning slate of big-play threats should provide for an exciting 2020. Redshirt junior quarterback Micale Cunningham, sophomore running back Javian Hawkins and junior wide receiver Tutu Atwell will make any Louisville game a must-watch, and it’ll prove one of Pitt’s biggest tests defensively.

The Virginia Tech Hokies looked to be the biggest disappointment of the ACC four weeks into the season. An 0-2 conference start against weak competition left the team in need of a new look. That’s when sophomore quarterback Hendon Hooker came in. Hooker won his first six games as the Hokies’ starter, making smart plays without turning the ball over to save the team’s season.

After junior cornerback Caleb Farley’s decision to opt out of the 2020 season, Virginia Tech will have to replace its strongest talent, who made four interceptions and broke up 14 passes last year. After Hooker faded in the last two games of the 2019 season, Virginia Tech still hasn’t named its starting quarterback for the fall. The Hokies will need to settle those uncertainties quickly to prepare for their opening game against rival Virginia.

It feels like ages ago that Florida State boasted a top-caliber program every time the team hit the field. Coming off a losing season that resulted in the second head-coaching change in three seasons, Mike Norvell will have plenty of young talent to work with as he begins his Tallahassee tenure, with four Seminoles earning All-ACC preseason honors. Norvell didn’t get off to a great start as the team’s leader, though, when his team nearly boycotted offseason workouts due to his allegedly inaccurate statement that he had one-on-one conversations with all of his players after the death of George Floyd.

After an underwhelming season in head coach Manny Diaz’s first year with Miami, the Hurricanes look to get back to their lost reputation as one of the country’s powerhouse programs. The team lacks consistent playmakers outside of junior tight end Brevin Jordan and will need some surprise breakout stars to emerge to become a serious contender.

The defending coastal champs enjoyed a phenomenal season last year that culminated in the Cavaliers snapping a 15-year losing streak against archrival Virginia Tech. The Hokies will get a chance for revenge to open the two teams’ 2020 seasons, but this time Virginia will not have its biggest weapon. Redshirt senior quarterback Bryce Perkins torched the Hokies with more than 450 yards of offense alone, and the Cavaliers will have to depend on unproven quarterback Brennan Armstrong to make up for the huge loss of Perkins’ departure.

The Demon Deacons recorded their first eight-win regular season in more than 10 years in 2019, but lost standout quarterback Jamie Newman to the transfer portal in the offseason. Their worst loss, however, came in August when first-team All-ACC wide receiver Sage Surratt announced his decision to opt out of the 2020 season. The team will depend on redshirt sophomore quarterback Sam Hartman to step up this year after losing the starting job in 2019.

Pitt felt disrespected by the media’s eighth-place projection, but it can’t feel more slighted than Georgia Tech, which finished dead last in the poll. Although the Yellow Jackets didn’t have a successful 2019 season by any means, they had to adjust to head coach Geoff Collins’ new offensive scheme. The program finally got rid of its notorious triple option for a more conventional approach, and the offense should start to own the new identity in 2020.

Former Ohio State co-defensive coordinator Jeff Hafley won’t have a lot to work with in his first year with the Eagles. Three-year starting quarterback Anthony Brown transferred to Oregon in the offseason, and running back A.J. Dillon left early for the draft, leaving key positions to fill for the Boston College offense. The Eagles, who haven’t had an eight-win season since 2009, look like they won’t be emerging from their pit of mediocrity just yet.

NC State put up the worst record in the ACC last year, only securing one conference victory. The Wolfpack will likely play more games competitively this year, as sophomore quarterback Devin Leary showed flashes of talent in his brief opportunities his first year. They will have to replace plenty of starters on an already mediocre defense as well.

There’s not much for Duke fans to look forward to this year. After ranking 94th out of 130 FBS teams in points per game in 2019 — and a new quarterback running the offense— the Blue Devils’ best chances to score may come on special teams. Preseason All-ACC first-team selection Damond Philyaw-Johnson averaged 32.3 yards per kick return last year, taking two back to the house.

Pitt’s ACC rival must replace the production of leading rusher Moe Neal and leading receiver Trishton Jackson this year, and it doesn’t have many playmakers up to the task. The Orange had one of the nation’s worst o-lines last year, and they don’t have a strong enough defense to make up for the offense’s woes.