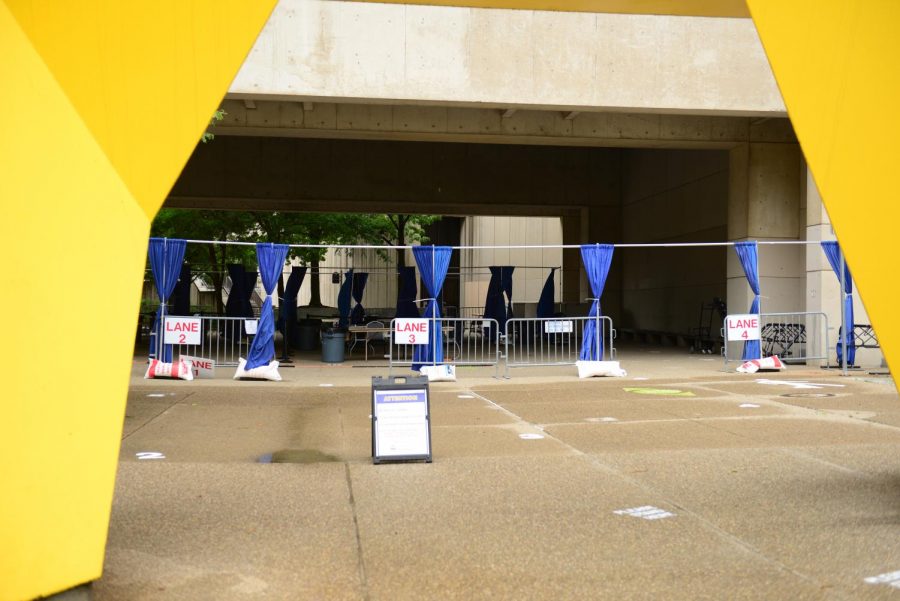 For Hannah Vorndran, a sophomore molecular biology major, taking a COVID-19 test as part of Pitt’s surveillance testing program was quick and painless.

“The entire process for taking the test only took between five to 10 minutes” Vordran said. “It was really easy.”

Vorndran is one of the roughly 2,200 students Pitt has tested thus far as part of its surveillance testing program. This program includes randomly selecting students living on and off campus for self-conducted COVID-19 testing. According to Pitt spokesperson Pat McMahon, Pitt expects to continue to test about 400 to 500 students per week as the University moves into phase two of its surveillance testing program. Pitt officials said they are testing about 10% of incoming students who are not experiencing symptoms of COVID-19.

Pitt moved to the second phase of surveillance testing starting on Sept. 2, where tests are administered to students without symptoms on Mondays and Wednesdays. In the first phase of the testing strategy, tests were administered for two consecutive days every two days as students moved back to Oakland.

Since the start of the testing strategy, the University has tested 2,210 students without symptoms and identified eight positive cases. Pitt’s total prevalence rate rose to 0.36% on Friday, which is a slight increase from the 0.31% prevalence rate reported last Monday. Pitt added 33 new COVID-19 cases on Friday, composed of 32 students and 1 employee, with a total of 128 students and 27 employees testing positive since June 26. Around 80% of all active positive cases are students who live off campus.

McMahon said Pitt will not increase the number of students chosen for testing now that the phased arrival period of students to the University has ended. He said the program remains “statistically adequate” in identifying the number of asymptomatic cases among the student population, and that students who have been tested once are not added back into the selection pool.

The University notifies students who have been selected by email and provides an online calendar where students can choose a date and time to be tested. McMahon said participation in the surveillance testing program is voluntary but the University has attempted to make the process as “easy and convenient as possible.”

“It is one way students can help to protect themselves and those on campus, including and especially those who may be more vulnerable to COVID-19,” McMahon said. “Members of the communities that surround our campuses also depend on students for their health.”

McMahon said 90% of students who signed up for testing on the University’s website showed up to their scheduled appointment on Aug. 29 and Sept. 2, but that those who do not show up for their scheduled testing time face no consequences.

“Participation in surveillance testing — while voluntary — is extremely important,” McMahon said. “It is one way students can help to protect themselves and those on campus, including and especially those who may be more vulnerable to COVID-19.”

In addition to randomized testing, students living on campus had to use Pitt’s daily COVID-19 health check website to log their symptoms for 14 days — seven days before they moved into housing, and seven days after. Students living off campus were also required to use the app every day during their 14-day shelter in place. All students were asked to shelter in place for seven days before and after arriving in Oakland, but the University did not track the requirement, and students were required to watch a COVID-19 health and safety training video.

Some students had difficulties arranging a time to get a test, though. Vorndran said she was initially not going to go to get tested after being selected because all of the open test dates were before she moved in. But she said she received another email from the University a few weeks later with more options.

“I kind of just ignored the first email because I wasn’t actually in Pittsburgh,” Vorndran said. “But then they sent me another one a few days before I moved in with more days open for that week which was helpful.”

Surveillance testing includes a self-swab done at the testing site, located behind Hillman Library and in front of Posvar Hall. Pitt provides students with nine steps for conducting a self-sample, which include sanitizing all materials, swabbing both nostrils and inserting the swab into a sample tube.

Nicole Mroz, a junior psychology major, said taking her self-sample was straightforward and took less than five minutes to complete.

“You just put the whole end of the swab in your nose and do three slow big circles around the inside of your nostril,” Mroz said. “Then at the end of the third circle you just hold it to the side of your septum for 10 seconds.”

According to Mroz, an email with an instructional video is sent out to students selected for testing, and the testing site also has TVs set up around the site playing through the video. She said there was also a medical official at the testing site who ensured she was conducting the self-swab correctly.

“Everyone has their own tester kind of walking them through the process and watching them the whole time to make sure that you aren’t lost anywhere,” Mroz said. “Basically they’re just guiding you through the whole thing, which is helpful.”

Sandeep Rajan, a junior neuroscience major, said he had a painful COVID-19 test experience over the summer, but taking his self-sample in Pittsburgh didn’t hurt at all.

“Maybe I just knew this time to not really cram it really far up my nose until it basically touched my brain,” Rajan said. “I just stopped when I felt pressure. It wasn’t bad.”

Rajan added that he was impressed both by how efficient the process was and the time it took to receive results. Rajan said he received his test results only two days after being tested.

“It was relieving to get the results back, and I also didn’t expect results to come back so quickly,” Rajan said. “I thought it would take at least a week because there’s such a demand for COVID testing.”

Vorndran said the test was worth the short time it took, and she feels comforted after receiving her results.

“I was glad that they randomly selected me to get tested,” Vorndran said. “I feel better knowing that I’m not spreading it to anyone.”