Opinion | Charlie Hebdo should remind us the value of free speech 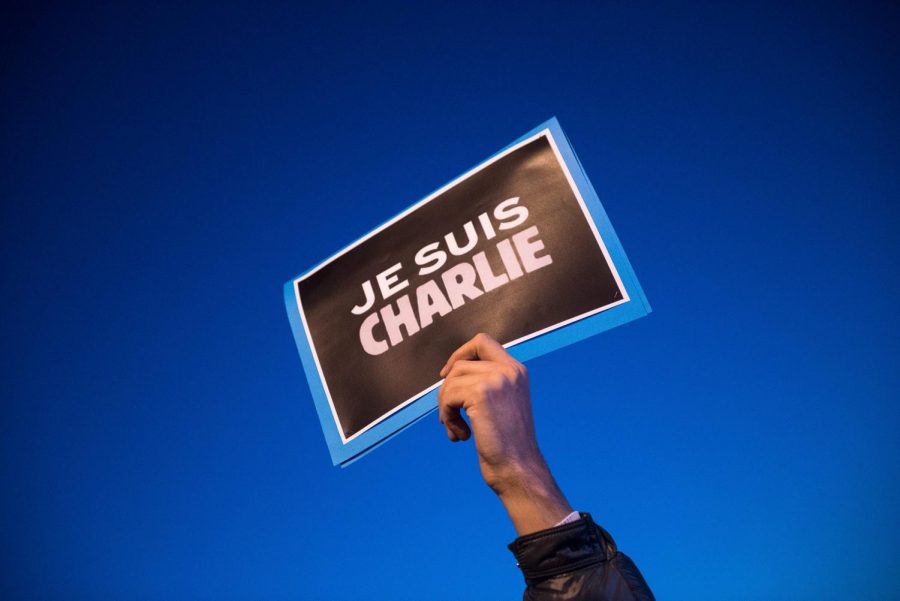 A man raises a "Je Suis Charlie" — translation: “I am Charlie” — sign during a rally in support of Charlie Hebdo on Jan. 7, 2015, in Marseille, France.

The Charlie Hebdo trial is underway in Paris, and in response, the French satirical newspaper has republished the cartoons that sparked the terrorist attack five and a half years ago –– depictions of the Prophet Muhammad, which is prohibited in Islam.

This is a reaffirmation of the newspaper’s continued dedication to the freedom of expression. Following the killing of 12 people at the newspaper offices, as well as a police officer and four Jewish men the following day in a kosher supermarket, the attack set off a global debate about free speech and its limitations.

For Americans, the attack on Charlie Hebdo should serve as a reminder of the importance of the First Amendment in a time where it is being heavily scrutinized. Political correctness and the cancelling of public figures for views declared socially objectionable culminate in today’s struggle for civil discourse –– something that has serious consequences for the American public.

Nearly a year before the terrorist attacks occurred, American comedian and political commentator Bill Maher was invited to the University of California, Berkeley, to address the graduating class. It was fitting that someone such as Maher, a free-speech advocate, should be selected to give the commencement speech on the occasion of the 50-year celebration of the Free Speech Movement.

During an episode of his HBO show, Maher, who has long been an opponent of organized religion, had made strong criticisms of Islam. Because of this, student groups on campus attempted to have him removed as the speaker, claiming he was “blatantly bigoted” and “racist” for raising legitimate concerns about the Islamic world. Maher would later say that Berkeley, the “cradle of free speech,” had become the “cradle for f—ing babies.”

Universities should be the bastion of the free exchange of ideas. Unfortunately, instances such as the Maher controversy and a host of other resistance movements decrying hate speech to silence voices is often the extent of the contemporary free speech debate in America.

Advocates for hate speech legislation should seriously consider the consequences should the wrong censor fall into power. Hate speech is protected under the First Amendment for precisely that reason, as UC Berkeley Chancellor Carol Christ notes, and the many people who want hate speech laws would certainly not concur with President Donald Trump’s definition of such speech.

“If you determine that someone has the right of determining what is hate speech and what is not hate speech, I believe you give a dangerous kind of authority to the government,” Christ said.

Supreme Court Justice Benjamin Cardozo wrote in 1937 that freedom of expression is “the indispensable condition of nearly every other form of freedom,” but dissenters argue that it can sometimes be an impediment to another person’s freedom and should therefore have limitations. The constitutional approach aside, the cultural implications of political correctness and cancel culture have been substantially more damning to the political polarization and national conversation in America.

Consider former New York Times opinions columnist Bari Weiss. While her colleagues allege that she brought trouble upon herself for mischaracterizing “turmoil inside the paper” following a controversial op-ed from Sen. Tom Cotton, R-Ark., Weiss claimed she was subjected to harassment and bullying by fellow staffers for her conservative views, despite describing herself as a  “left-leaning centrist.” She claims staffers called her a “Nazi” and a “racist,” and she received comments about how she was “writing about the Jews again.”

“But the truth is,” Weiss writes in her resignation letter, “that intellectual curiosity –– let alone risk-taking –– is now a liability at The Times.”

Political affiliation and religion are two sides of the same coin. The difference between the two is that a person falls into risk of being labeled a bigot, or in the case of Charlie Hebdo, being murdered, should they criticise the latter. Organized religion should not be immune to criticism and generally that practice is implemented across the board with healthy discourse.

Islamism, however, has often been an outlier for the left. It is a concern that a political tradition about reason and egalitarianism is often afraid to confront the very ideology that opposes the values liberalism holds so dearly, such as freedom of speech. In 1988, there was a decadelong Iranian government-backed fatwa calling for the execution of Salman Rushdie, the author of the controversial book “The Satanic Verses.”

The fact that 28% of British Muslims supported Ayatollah Khomeini’s bounty because of Rushdie’s novel, which, similar to Charlie Hebdo, depicts the Prophet Muhammad, demonstrates the importance to protect the right to criticize religious ideas without fear of being hunted.

Religion and politics are not the only troubled waters of free speech. The pinnacle of the debate is stand-up comedy –– the rawest expression of the most essential human right dating back to when Lenny Bruce was arrested and convicted in 1962 for obscenity, to which he would say, “Take away the right to say ‘f—’ and you take away the right to say ‘f— the government.’”

According to The Wall Street Journal, A-list comedians such as Chris Rock and Jerry Seinfeld are refusing to play college shows because they believe the audiences are becoming too easily offended. Not only that, universities often present contracts forbidding comedians to use certain words or even broaching entire subjects, the Journal reported.

Take, for instance, Dave Chappelle –– a provocateur celebrated for his sophisticated and explicit takes on race and pop culture. His jokes about transgender people in his Grammy award-winning special have angered many people, however, and for this some have labeled him a transphobe. Whether Chappelle is actually transphobic or merely joking about another group of people is irrelevant –– he has the right to do so.

The night of the Charlie Hebdo terrorist attack, thousands of Parisians held up pens –– referencing “the pen is mightier than the sword” ––  and signs that read, “Je Suis Charlie,” French for “I Am Charlie.” Americans should heed warning of this act of terror whenever the First Amendment is called into question. For when Charlie Hebdo was attacked, the most inextricably human right was attacked as well.

Aidan is a senior majoring in English writing with a certificate in Jewish studies. He primarily writes about Israel, anti-Semitism and film. Write to Aidan at [email protected].