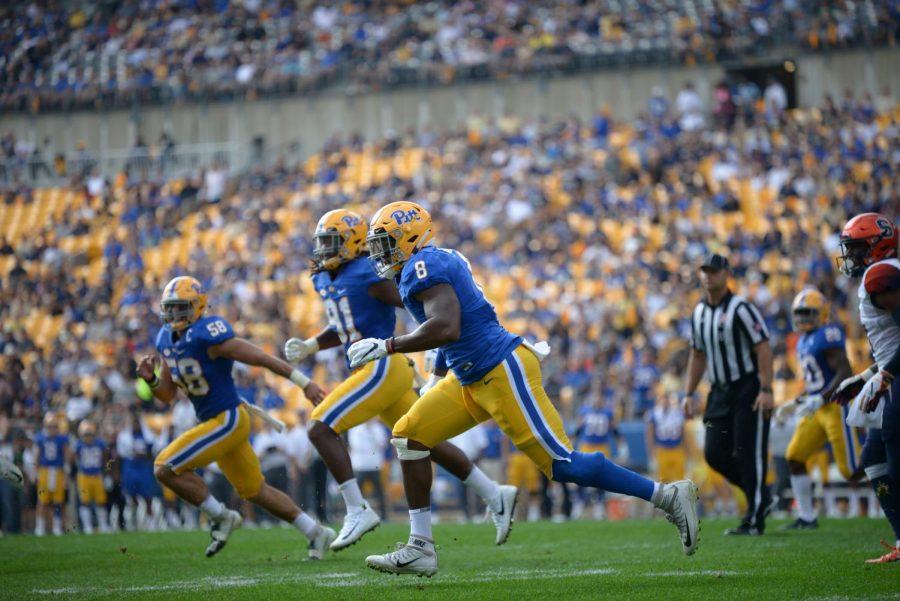 The Panthers will kick off the football season this Saturday with their first game against Austin Peay.

Most Pitt students will not attend in-person classes Friday, but the Pitt football team will be preparing for its first game against Austin Peay. No fans will be permitted in the venue, but with or without fans, football is an unavoidably high-contact sport.

Due to the lack of distancing in the sport and the global pandemic, the Big Ten and Pac-12, two major college football conferences, decided to cancel their fall seasons. The Big Ten cited multiple reasons for cancelling the season, including “medical advice and counsel.”

“As time progressed and after hours of discussion with our Big Ten Task Force for Emerging Infectious Diseases and the Big Ten Sports Medicine Committee, it became abundantly clear that there was too much uncertainty regarding potential medical risks to allow our student-athletes to compete this fall,” the statement said.

As of now, the ACC — Pitt’s conference — still plans to play in some capacity.

Along with many other players across the country, some Pitt football players, fearing the ACC will reverse its decision, have taken a stand, saying that they want to play. Some fans have cited this example, arguing to keep the college football season as scheduled. But want isn’t synonymous with need, and this seems to be something that leaders forget, especially when there’s money involved. We want things to be normal. We want to hug our friends. We want to go to our classes and club meetings. But that doesn’t mean we should, and it doesn’t mean that we will. The same should go for football.

Though players can be quarantined and kept in pods, there’s no way to ensure that coronavirus doesn’t seep into the team — which travels, practices and plays together. The MLB has struggled to keep cases under control. Rutgers, Northwestern and Clemson all dealt with team outbreaks earlier in the summer. Texas Tech, Louisiana State, North Carolina State and Oklahoma — amongst others — are in the midst of athletic centered outbreaks. It’s inevitable.

Pitt administration isn’t allowing students to attend in-person class yet due to safety concerns, but football is happening. This isn’t to say that students should be going to classes, but rather that if education isn’t safe, sports aren’t either. Though, it’s become increasingly clear over the past few months that athletic leaders and University administrators are making decisions based more on money than safety. But it’s not fair to increase exposure even further.

It’s true that many — though not all — college-aged people are young and healthy, and have a lesser chance of becoming critically ill from coronavirus. But healthy students are still in contact with other community members, and other students who might be immunocompromised. In Maine, 147 cases and three deaths were tied to a 60 person wedding ceremony. None of the deaths were attendees, which is to say, even those who don’t directly engage in the irresponsible behavior suffer the consequences.

Because Pitt is located in the middle of a city, Pitt athletes have greater interaction with the surrounding community than they would if they attended school on a more rural, secluded campus. This makes football especially nonsensical, because it puts the entire community at a heightened risk. Allegheny County’s cases are trending downward, though with a recent spike in Pitt’s student cases, it seems this might not last much longer.

Yes, football brings in revenue for Pitt. Yes, some players want to play. Yes, athletes have trained hard and worked for years to take the field. But we’re in the middle of a global pandemic. Over 193,000 people in the United States have died. There is no way for Pitt to ethically justify playing football.