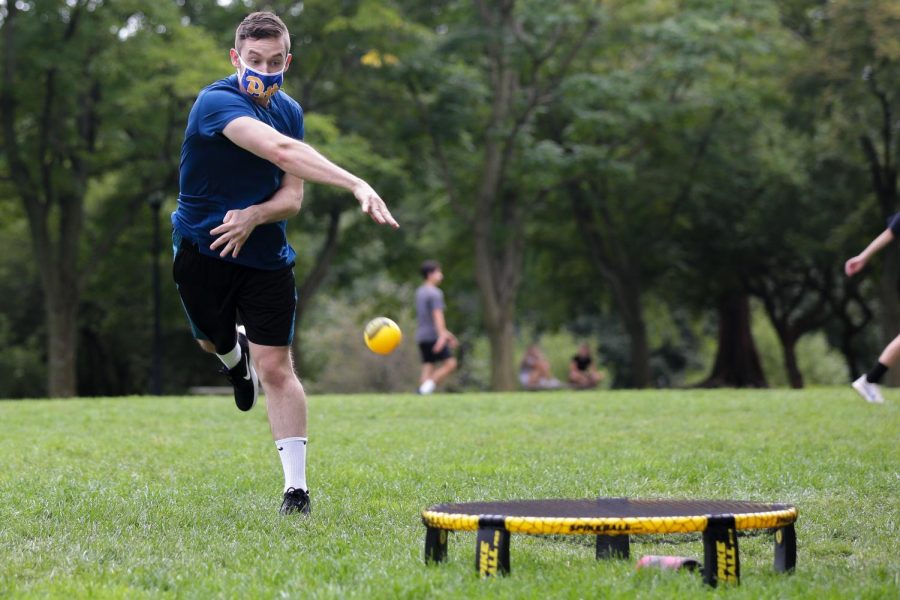 Members of the Panther Roundnet club practice spikeball on the Cathedral lawn on Monday afternoon.

When you’ve run out of picnic spots and TV shows to binge, finding things to do on a college campus during a pandemic can be difficult.

Many students have had to change their lifestyles on campus and find new activities to keep themselves entertained. Although Pitt provided a list of suggested activities to do while social distancing, some students have come up with their own ideas.

Jaden Adams, a sophomore majoring in media and professional communications, found a way to explore downtown Pittsburgh while also having fun and staying socially distant from others.

“When you tour Pitt, they tell you that the city is your campus,” Adams said. “I found a scavenger hunt app, and I think this would be a really fun thing to do, especially if you’re not from around here.”

Adams uses an app called Let’s Roam: Scavenger Hunts. It requires a paid subscription, but because most college students are on a budget, they can take advantage of the week-long free trial for their first hunt. Users can do the hunt alone, or create a team of friends to search the city together.

“Basically, you search for scavenger hunts in your area, and you can join a team and have your friends make profiles so you can all do the same hunt together.” Adams said. “It tells you what building to go to, but it doesn’t give you any directions to it, which makes it kinda difficult.”

“You get to learn about the history of the city and see all of the cool buildings.” Adams said. “The first question asks about a statue of a large man outside of the City-County building, and then you have to figure out his name.”

Adams said she thinks these scavenger hunts are the perfect activity to do with friends while having fun and staying safe.

“It’s perfect right now, because you only go with the people that you know and it’s really socially distanced because you don’t go inside any of the buildings,” Adams said.

Students looking for a more high-paced activity can join Panther Roundnet, a competitive Spikeball club. According to Anthony George, the club president and a junior marketing major, no experience is necessary to play.

“We pride ourselves on being really inclusive,” George said. “We range from people who haven’t played at all, to people who have casually played it at grad parties, and to people who actually go to Spikeball-hosted tournaments and compete.”

Panther Roundnet usually hosts its Spikeball games on the Cathedral lawn or on Schenley Plaza. George said Spikeball is an ideal sport to play while social distancing due to the limited number of participants and its outside setting.

“Luckily for us, compared to a lot of other clubs and competitive sports, our sport is meant to be played outside, so it really works out well because naturally we are distanced,” George said. “We’ve been following Pitt’s guidelines and making sure that everyone’s staying safe.”

George said Panther Roundnet has had to adjust its travel plans and practice schedule because of the pandemic.

“In the winter when it gets colder, we usually practice at the Cost Center, but now we have to eliminate that from our plans,” George said. “Other than that, we won’t really be able to host other schools here or travel to tournaments.”

But club members still find ways to play. According to George, group members have been independently scheduling their own games with their friends.

“We’re able to host this kind of forum where we can ask our friends if anyone is down to play,” George said. “Even though it’s all within the club, it’s been pretty independent.”

According to George, interest in the club this year is especially high among first-years, who may be more familiar with the sport than older students.

“We have a lot of interest from the freshman class, which has been great,” George said. “I think that the younger the kids get, the more interest there is. When it started in 2014, nobody really knew of it, but year after year more people know the game and it gets more competitive.”

Along with students, professors have also had to adjust to life during a pandemic. Rebecca Denova, a senior lecturer in the religious studies department, has spent her free time reading instead of taking up a new hobby.

“A lot of people ask me what my hobbies are — I don’t have any. I’m not skilled, I can’t make quilts, I don’t paint or draw,” Denova said. “My hobby has always been reading, and people don’t understand that, but that’s my fun.”

Just like students, professors can experience “Zoom fatigue.” Denova said a side effect of staring at the screen all day is a lack of focus, which sometimes affects her ability to read.

“Your eyeballs get crazy when you’re on the screen all day, and then what I do for enjoyment is sit on the deck and read a book,” she said. “I know I really need to rest my eyes, but because I have so much going on in my brain I constantly need to refocus on what I’m reading.”

To solve this problem while continuing her reading hobby, Denova said she has been rereading old classics. Even though she has read them already, Denova still enjoys them just as much as if they were brand new.

“I am literally rereading old Agatha Christies,” Denova said. “They’re light reading for me, and I kind of need that. I need something that’s fun and I don’t have to concentrate, and I think you really need that kind of break.”

Along with revisiting favorite novels, Denova has also been spending her time organizing her bookshelf.

“On my to-do list, I have been trying to organize my home office,” she said. “It’s like when you stand in front of your refrigerator because you know you bought something but you can’t see it, well that happens every time I need to look something up.”

Although college students can be busy, Denova said she encourages them to pick up reading as a hobby, especially if they are spending lots of extra time at home.

“My recommendation is, if nothing else, read historical novels, because they’re so well-written and you can learn so much from them.” Denova said. “You guys are smart, and that’s where you can really fill in all this free time at home.”