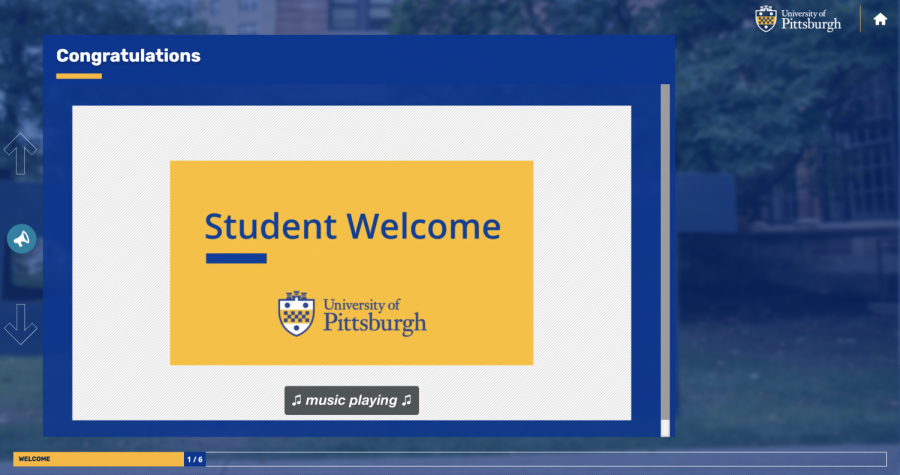 Pitt’s Class of 2024 participated in a virtual Welcome Week from Aug. 16-18 to kick off an unconventional semester.

By India Krug and Priya Ray

“I actually considered going to community college because I didn’t know what the experience would be like here,” Wojton said. “I figured I could save a couple thousand dollars and take some basic classes to get them out of the way.”

Pitt’s class of 2024 participated in an unprecedented Welcome Week from Aug. 16-18 to kick off an unconventional semester in the shadow of the COVID-19 pandemic. The usual festivities, such as a large, in-person convocation at the Petersen Events Center, were not feasible this year. Instead, many first years attended online activities hosted by the University in order to connect before even stepping foot on campus.

“Alora Chateaux was the best host and made sure we were having fun despite it being virtual,” Bago said. “It was my favorite Welcome Week event because of the laughs I had with my roommate during it.”

The University tried to make student engagement as easy as possible with a fully virtual Welcome Week so first-year students could connect with one another, even if they weren’t on campus. Faith Kehinde, the student director for the First Year Mentors, said the FYM team worked hard to host themed Zoom calls, such as Speed Friending and a Virtual Dance Party, for first-year students who were able to socialize and make new friends.

“While everyone can recognize that jumping into a Zoom call with a group of people that you don’t know can be disconcerting, we as FYMs did our best to facilitate socialization, and the making of connections,” Kehinde, a junior neuroscience major, said.

Liz Iwasyk, a first-year pre-pharmacy student, wishes the University could have had all first-year students move in at the same time prior to classes starting, making it easier to connect with other classmates and become more familiar with the Pitt community.

“My brothers who attend a different university were able to attend in-person orientation events and meet other students, which I feel like we definitely missed out on,” Iwasyk said.

Iwasyk added that the virtual events certainly helped students get to know the University, but perhaps not each other. She said she felt disconnected while attempting to transition into her first year away from home.

“Orientation taught us about Pitt, but there weren’t many opportunities to meet other students,” Iwasyk said. “It would’ve been nice to have something to go on here, even if it was virtual. [Orientation] just felt like it was something separate.”

“Social media has been really nice in helping me meet people from Pitt,” Mukherjee said. “The Facebook group also helped, that’s how I met my now-roommate.”

The sentiment of being alone together continued into the start of the semester on Aug. 19. The waves of students moving in over a period of weeks meant some first years were faced with Zoom lectures and Canvas assignments before they even got to their dorms.

Mukherjee said she missed the lack of rapport with professors and classmates.

“My least favorite aspect is that there’s little to no student interaction,” Mukherjee said. “A lot of my learning comes from my friends because we’ll exchange questions or someone else will ask a question I have. That just isn’t as common online.”

According to University spokesperson Pat McMahon, about 4,000 first-year students — roughly the same as Pitt’s first-year enrollment in 2019 — are living on campus but remain isolated in their dorms. Iwasyk said she and her friends are getting creative with meeting new people.

“We like to walk down near Cathy and sit out on the lawn,” Iwasyk said. “When we see a group of people sitting, we will go by and introduce ourselves.”

Making new friends at Pitt is also now dependent on geography — dorm room layout. Pitt created Pod Week so that first years could quarantine with students living in their room or suite. This plan helped create automatic communities for students as soon as they arrived on campus.

But everyone at Pitt, like Mukherjee, had their own personal reasons that made choosing this adjusted way of college life worthwhile to them.

“I chose to come to Pitt for internship opportunities and the major they offered. I love the community and the vibe here,” Mukherjee said. “I wasn’t expecting to make a bunch of friends so soon because of coronavirus, but everyone has been really friendly.”