Preview: Panthers to coast by Governors 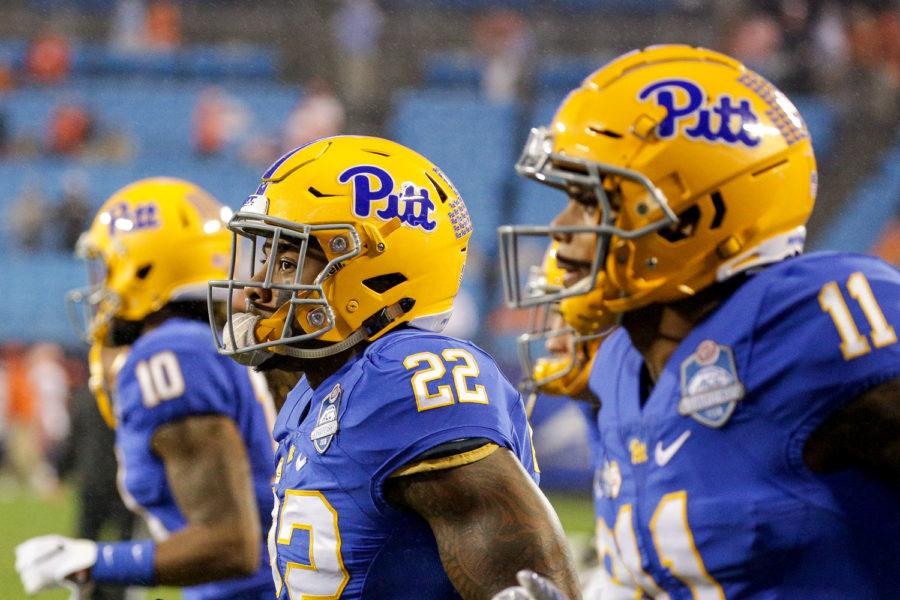 The NCAA will be adopting different protocols this season to try and keep players and personnel safe from COVID-19, including encouraging same-day travel, using electronic whistles and limiting attendance.

Pitt football head coach Pat Narduzzi had a smile on his face as he kicked off his Monday press conference this week.

“It’s game week,” Narduzzi said. ”I asked our staff the other day, might have been Sunday, ‘How many guys thought we’d get to game week?’ There wasn’t too many hands raised up in the air. But we are here.”

Narduzzi’s squad will suit up for the first time on Saturday, hosting the Austin Peay Governors at Heinz Field. Coming off an 8-5 season that included a Quick Lane Bowl win over Eastern Michigan, the Panthers will look to improve upon a subpar offensive season from last year, where they ranked 113th in the nation in total points per game.

Pitt News sports editor Alex Lehmbeck ranked Pitt third in his 2020 ACC football power rankings, expecting a formidable Panther defense once again. With an elite defense behind him, senior signal caller Kenny Pickett will need to lead Pitt’s offense out of the bottom tier they’ve yet to escape to reach the team’s full potential.

In the first college football game of the 2020 season, Austin Peay suffered a nail-biting loss to Central Arkansas. Trailing by a point with 34 seconds left, Central Arkansas lofted a short touchdown pass to put the Governors away. In his first appearance since a season-ending Lisfranc foot injury halted his first full year at the starting position, Austin Peay redshirt junior quarterback Jeremiah Oatsvall threw for 181 yards with an interception, and ran in the go-ahead touchdown from one-yard out with 1:40 left to play.

Governors first-year running back C.J. Evans started the season off with a bang, taking his first carry 75 yards to the house. Although Pitt lost All-American defensive tackle Jaylen Twyman for the season, don’t expect Evans to see that kind of breathing room against this Pitt defensive front. Redshirt sophomore defensive tackle Devin Danielson, with an imposing 6-foot-1, 300-pound frame, will take the starting slot in place of Twyman, keeping Pitt’s defensive line impenetrable.

Austin Peay put together an impressive performance in week one despite multiple players on the injured list. Preseason All-OVC wide receiver DeAngelo Wilson missed the Governors’ first game, but interim head coach Marquase Lovings hopes he can get Wilson back against the Panthers, along with at least one of the three long snappers who missed the Central Arkansas game.

If Wilson can return, it would give the Governors’ passing game a huge lift. Narduzzi has put a lot of trust in redshirt sophomore cornerback Marquis Williams, however, who was thrust into the starting role after senior Damarri Mathis suffered a season-ending injury in August.

“Right now, Marquis is the guy,” Narduzzi said. “What he’s done is be consistent. He knows the defense, tackled really well, been consistent. He’s made plays on the ball.”

After the Ohio Valley Conference cancelled their football season this fall, the Governors independently added three games to their schedule, including two matchups against FBS teams. Pitt has played 18 games against FCS opponents in their 130-year history — their only loss coming against Youngstown State in 2012. Narduzzi warned his team that the Governors would come to Pittsburgh hungry.

“They’re gonna play their Super Bowl. This is a bowl game for them. They get three games, I let our kids know that,” Narduzzi said. “We’ve gotta play a darn good football game to beat these guys. Nothing’s easy.”

Narduzzi praised the Governors’ roster, noting that the program instills an admirable work ethic in their players.

“They’re a talented football team, make no mistake about it,” Narduzzi said. “They’re talented, tough, physical. You can tell they love to play the game. When you watch them play, they just play with an attitude.”

The Governors had 2,000 spectators for their first matchup, but this bout will occur inside of an empty stadium after Pitt announced they won’t allow fans for any September home games. Pitt senior cornerback Jason Pinnock expects the Panthers to adjust to the new environment easily.

“We practice like it because nobody’s gonna be there,” Pinnock said. “It’s just us. We’re the energy, and energy is contagious. We know as long as we keep that energy, at least the team will keep it throughout the game”

Narduzzi downplayed the impact that the absence of a home crowd will have on his team.

“I think the weird part will be pregame, guys like the crowd and all that,” Narduzzi said. “Once the game starts, it doesn’t matter. Nobody pays attention to the crowd anyway. We’ll have some crowd noise out there just to keep something looking normal for the guys and have some music going in between plays.

I predicted Pitt’s schedule game-by-game last week, and I’m sticking with my pick. Pitt comes in without having faced any live competition, but should still take care of the Governors easily.

I expect Pickett to have a strong game, throwing for over 250 yards and a touchdown. Meanwhile, the Panther defense will once again show their toughness. Anchored by redshirt senior safety Damar Hamlin and redshirt junior safety Paris Ford in the secondary, they’ll hold Oatsvall and the Governors’ offense to 10 points.