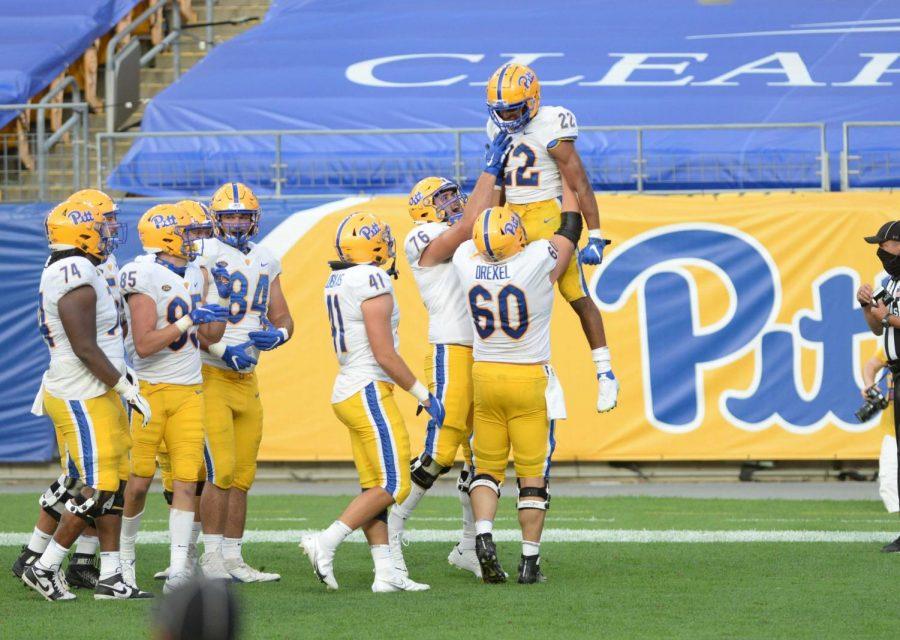 The Panthers opened the season with a 55-0 victory over the Austin Peay Governors on Saturday.

But despite an offseason of doubt, confusion and adjustments due to the ongoing COVID-19 pandemic, Pitt indeed played a football game without a single fan in attendance Saturday. The Panthers opened the season with a 55-0 victory over the Austin Peay Governors filled with highlights on both sides of the ball.

After losing star defensive lineman Rashad Weaver to a season-ending injury in training camp last year, Pitt fans looked forward to seeing his return to the field Saturday. But they will have to wait at least another week, as Weaver tweeted Saturday that he’d miss the season opener due to two positive COVID-19 tests.

Weaver expressed his frustration in his tweets, saying different companies provided him with different test results.

“It’s not adding up,” Weaver said. “Let’s call it spade for spade. Company 1 the common denominator.”

Weaver was not the only player out — Pitt announced 40 minutes before the game that a total of seven players would not attend due to COVID-related protocols. Pitt head coach Pat Narduzzi refused to give any more details about the missing players and said he anticipates having everybody back for next week.

Austin Peay came into Saturday’s matchup as one of the few programs in the country with a game under its belt. The Governors played the NCAA’s first college football game of the fall two weeks ago, losing a nail-biter to Central Arkansas.

After missing the team’s first game, the Governors’ preseason All-OVC wide receiver DeAngelo Wilson made his presence known right away, catching a 9-yard pass on the game’s first play from scrimmage. After rushing for the first down on the next play, Pitt’s defense stifled the Governors’ next set of downs. A third-down heave resulted in preseason All-American safety Paris Ford’s first interception of his junior campaign.

Pitt took advantage of the strong field position, with senior quarterback Kenny Pickett and senior running back A.J. Davis marching the Panthers down the field. A 2-yard touchdown rush by redshirt freshman Daniel Carter gave the Panthers their first points of the season.

“Once pregame warmups were over, you’re kind of already in the swing of things,” Morrissey said. “Especially when that first ball snaps, it’s game time, so you don’t really pay any attention to it. It felt like Christmas morning, though, playing football for the first time in a long time.”

After the Panthers forced a punt on the ensuing possession, it only took Pitt’s offense two plays to get the ball in the end zone again. Pickett connected with junior wideout Shocky Jacques-Louis on a 68-yard bomb to put the Panthers in scoring position, and the quarterback flexed his mobility on the next play, diving for the pylon to put Pitt up 14-0.

The Governors finally got their offense moving on the next possession, but stalled their momentum with a missed 35-yard field goal. The Panthers capitalized immediately with graduate transfer DJ Turner, who joined the team earlier this month, pulling in a 51-yard touchdown pass from Pickett.

Both teams agreed to shorten the third and fourth quarters to 10 minutes each.

Redshirt freshman Davis Beville replaced Pickett as quarterback on the final drive of the first half, after Pickett put together an impressive statline in his brief playing time — completing 14 of 20 passes for 277 yards and a touchdown, adding 23 yards and a touchdown with his feet. Narduzzi praised Pickett’s leadership in the week leading up to game day.

“He’s the key to our offense. He’s going to be a great leader now as a captain and a quarterback,” Narduzzi said. “He did an outstanding job. I don’t know if you could have played any better than Kenny Pickett played today.”

With Beville and redshirt freshman Joey Yellen alternating possessions as signal-callers, Pitt didn’t add to its lead in the third quarter. An interception from Panthers redshirt sophomore defensive back Erick Hallett should’ve given Pitt the ball on the Governors’ 26-yard line, but a personal foul after the play pushed them back to the 41. An ensuing three-and-out gave the ball right back to the struggling Austin Peay offense early in the fourth quarter.

Despite the Panther offense’s slow second half, it didn’t stop Pitt from getting some points on the board in the fourth quarter. Sibley Jr. blocked a punt deep in the Governors’ territory, scooped it up and jogged into the end zone untouched. A botched snap resulted in a failed extra point attempt for the Panthers on the next play. Pitt blocked the punt on the next Austin Peay possession as well, setting up a 4-yard rushing touchdown from Davis.

Ford relished the opportunity to cheer on his teammates that came off the bench in the second half.

“Those guys, they’re on their feet cheering for me, so I feel like it’s only right that I show them my respect and my energy for them,” Ford said. “I love seeing those guys. Our young guys are definitely gonna be good for the future.”

After All-American defensive tackle Jaylen Twyman opted out of the season in August, last year’s dominant defensive front scrambled for a replacement leading up to the season opener. But Pitt didn’t miss a beat, providing constant pressure on the Governors’ backfield, holding Austin Peay to a measly 3 rushing yards for the entire game.