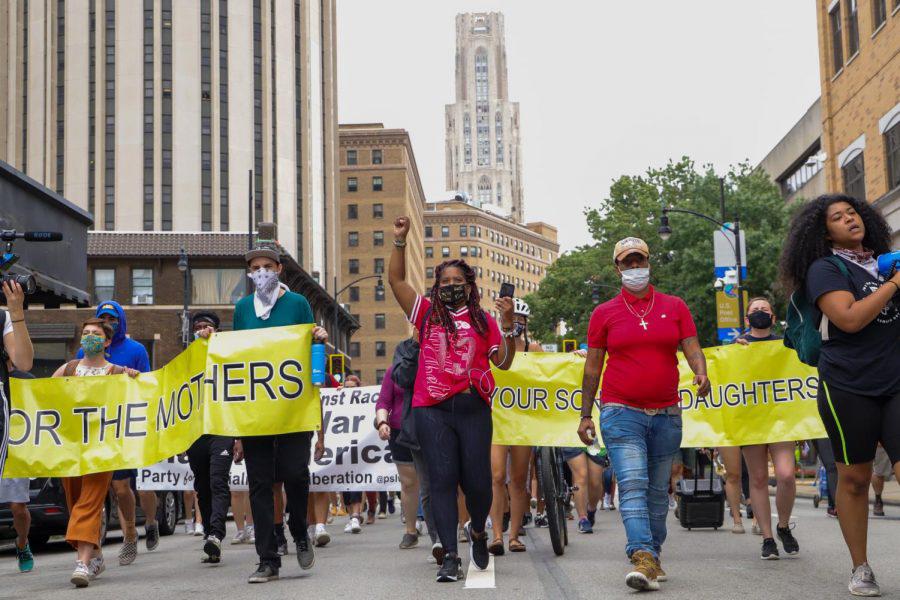 After 70 days of her hunger strike, Dannielle Brown marched Friday alongside Pittsburgh activists from Chatham University with stops at Carnegie Mellon University, Pitt and Carlow University before ending at Duquesne University’s Brottier Hall to honor her son.

By Ashton Crawley and Rebecca Johnson

Dozens of voices chanting, “What do we want? Justice. When do we want it? Now. If we don’t get it? Shut it down!” to the beat of a drum and a blaring trumpet could be heard on an overcast Friday morning down Fifth and Forbes avenues across the City. 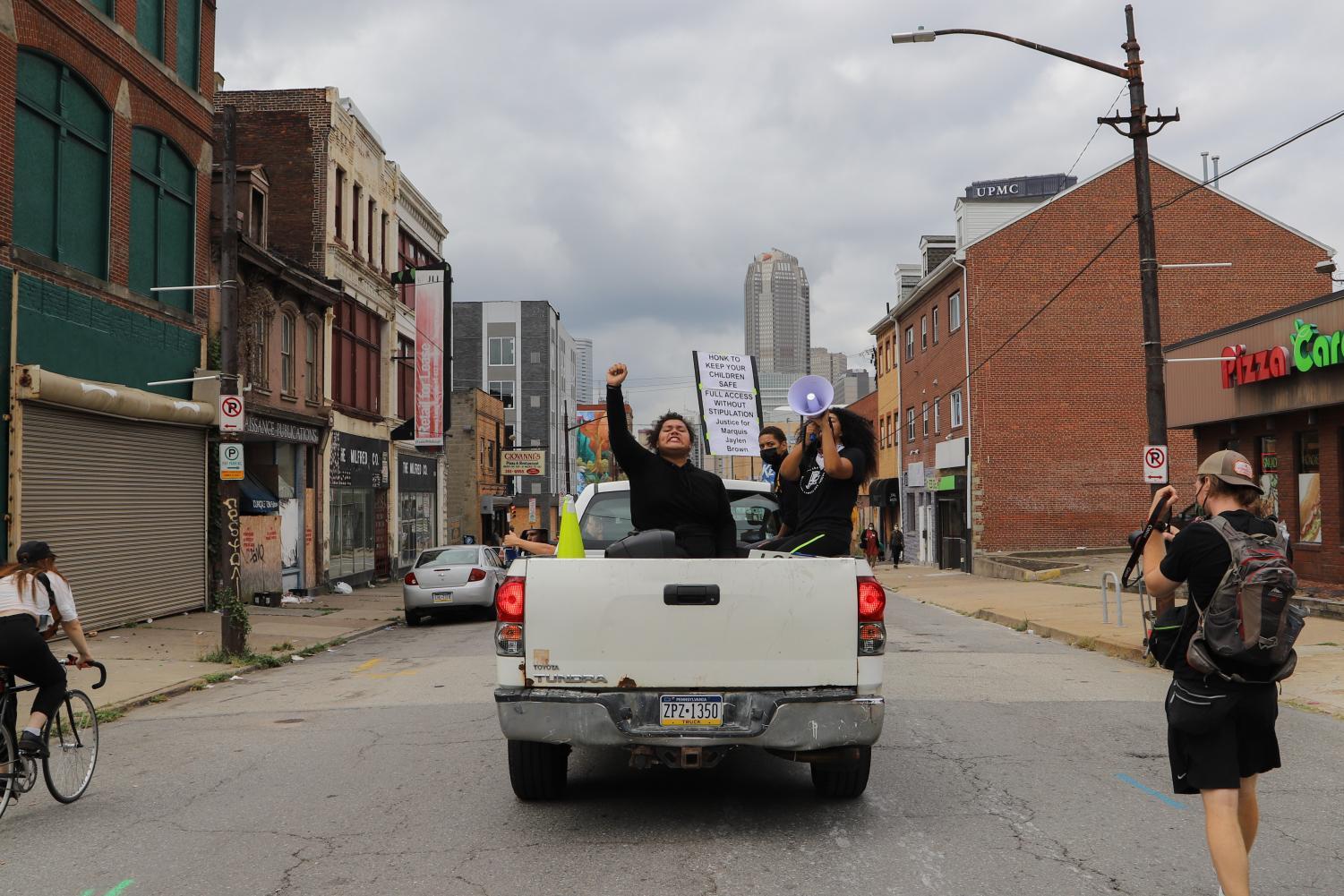 One of these voices was Precious Melchizedek, a junior psychology major. She said Friday’s march across five Pittsburgh campuses led by Dannielle Brown was a perfect opportunity to support Brown, as well as hold Pitt accountable.

“So many of these institutions claim they want to stand by us and they’re for the cause and they’re down to protect us, but look at us now,” Melchizedek said. “We’re on campus, where are you? No [Chancellor Patrick] Gallagher is present, but yet they’ll go to the news and say that they support Black lives.”

Melchizedek was one of about 100 people who participated in Friday’s 40 for 40 march. The march — which took place on the 19th anniversary of 9/11 — commemorated the 40 people who lost their lives in Flight 93 in Shanksville, as well as the football jersey number of Brown’s son, Marquis Jaylen Brown. The march started at Chatham University and continued with stops at Carnegie Mellon University, Pitt and Carlow University before ending at Duquesne University’s Brottier Hall. 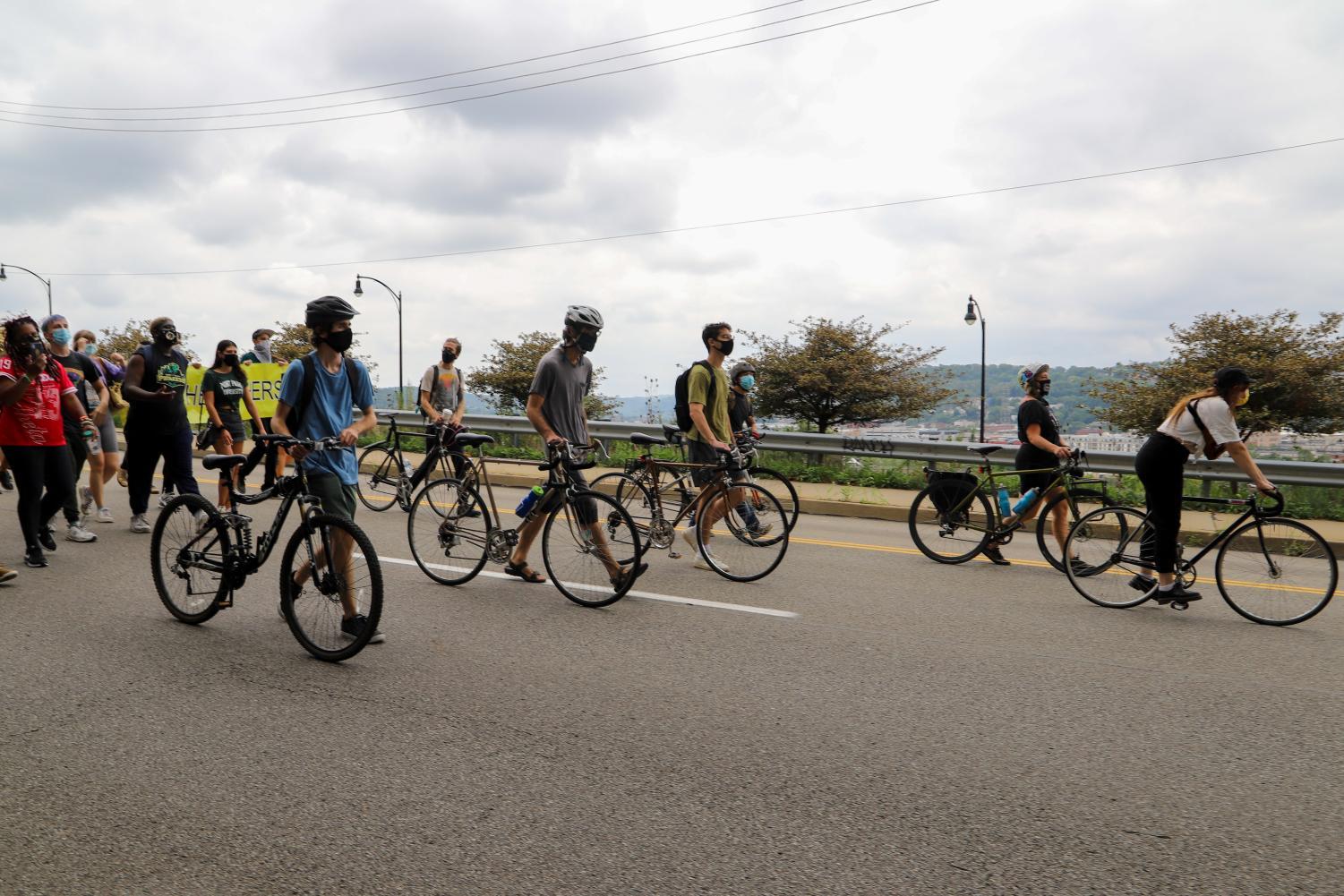 Marquis Jaylen Brown, also known as JB, was a Duquesne student who died in October 2018. Dannielle Brown is currently on her 73rd day of a hunger strike as of Monday at the Hill District’s Freedom Corner, demanding an independent investigation into JB’s death from Duquesne as well as mandatory body cameras, mental health crisis training and de-escalation training for university police. A man vandalized Freedom Corner on Friday night, following the protest.

Brown said her advocacy is about protecting students from police brutality all across the country.

“I’m going to make sure that every student, not only in the state of Pa., knows there’s a Mama Brown out here, laying down her life for all of you,” Brown said. “Until my last breath I will stand up and fight to make sure you all are safe and you all have a voice.”

The march got pushback from Duquesne’s administration. In an email sent Friday at about 4 p.m. to all students, the university said it expressed “strong disapproval” of the march “trespassing” on private university property.

“The crowd today chose to endanger thousands of people unnecessarily,” the email said. “They utilized bullhorns and microphones, disrupted classes and the work of students these protestors claim to value.”

Duquesne also said in the email that it had been “extremely patient and accommodating” toward Brown. It also said protestors were not following COVID-19 mitigation procedures, such as wearing a mask and social distancing, even though masks were required at the event and nearly all protesters wore one. 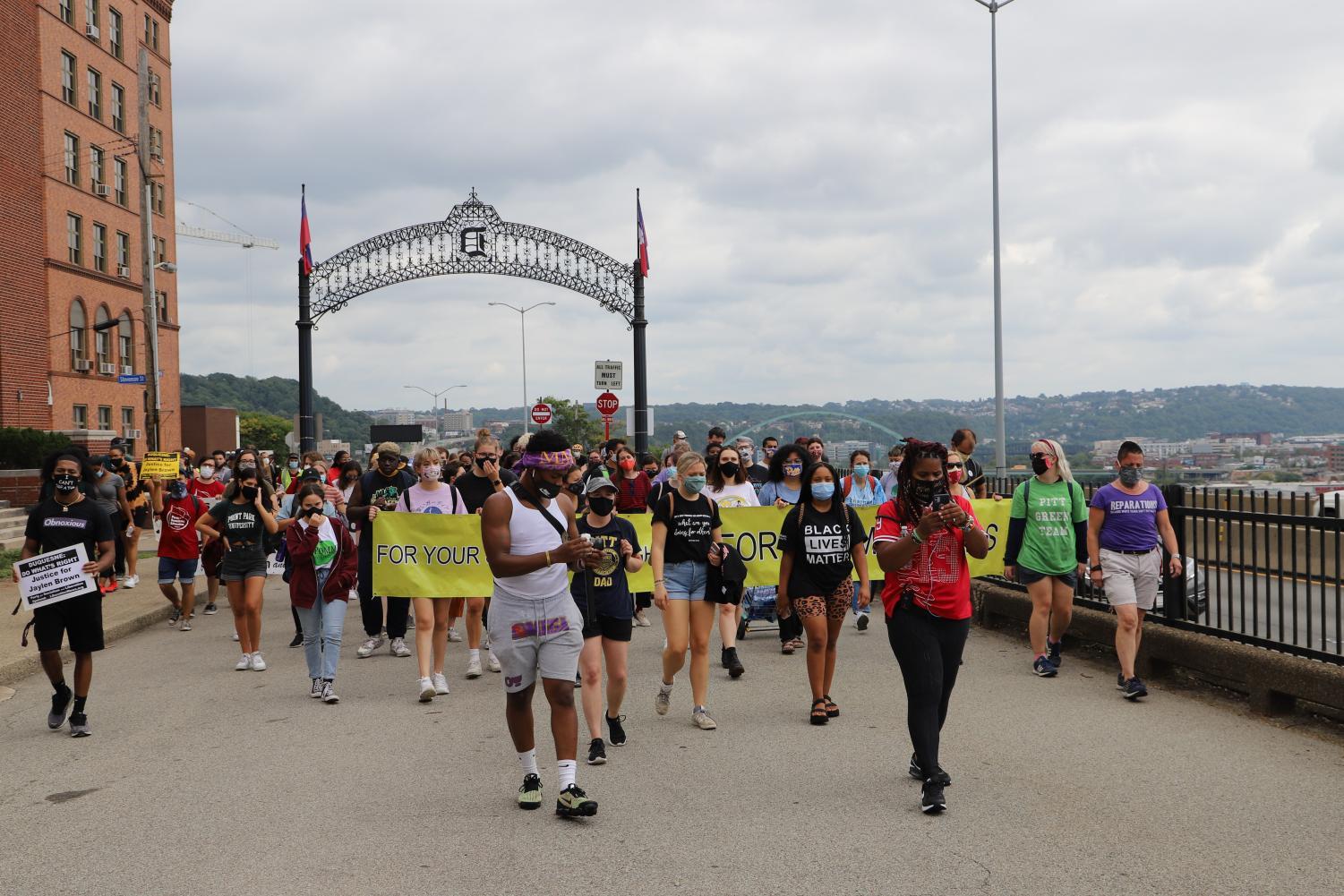 Brown told a different story in a statement on her Instagram account later that night. She said the email sent after the march is another example of Duquesne not protecting its students and not taking meaningful steps to address concerns about her son’s death.

“Duquesne still doesn’t have body cameras and has no intention of meeting my demands. The reality is they are taking your tuition money and disrespecting you guys in the process,” Brown said. “Duquesne, your true colors are showing, and I will keep exposing you!”

The march did not attract police attention beyond street closures until it reached Brottier Hall, the building where JB died. While protesters were speaking outside the residence hall, what appeared to be a Duquesne student came out of the building wearing a President Donald Trump T-shirt and waving a Trump flag. While a few protestors initially rushed toward him, other protesters made a human wall in front of the student to protect him. Protest organizers said, “Leave it alone, he’s not worth it” and “stay back.” The man eventually went back inside the residence hall. 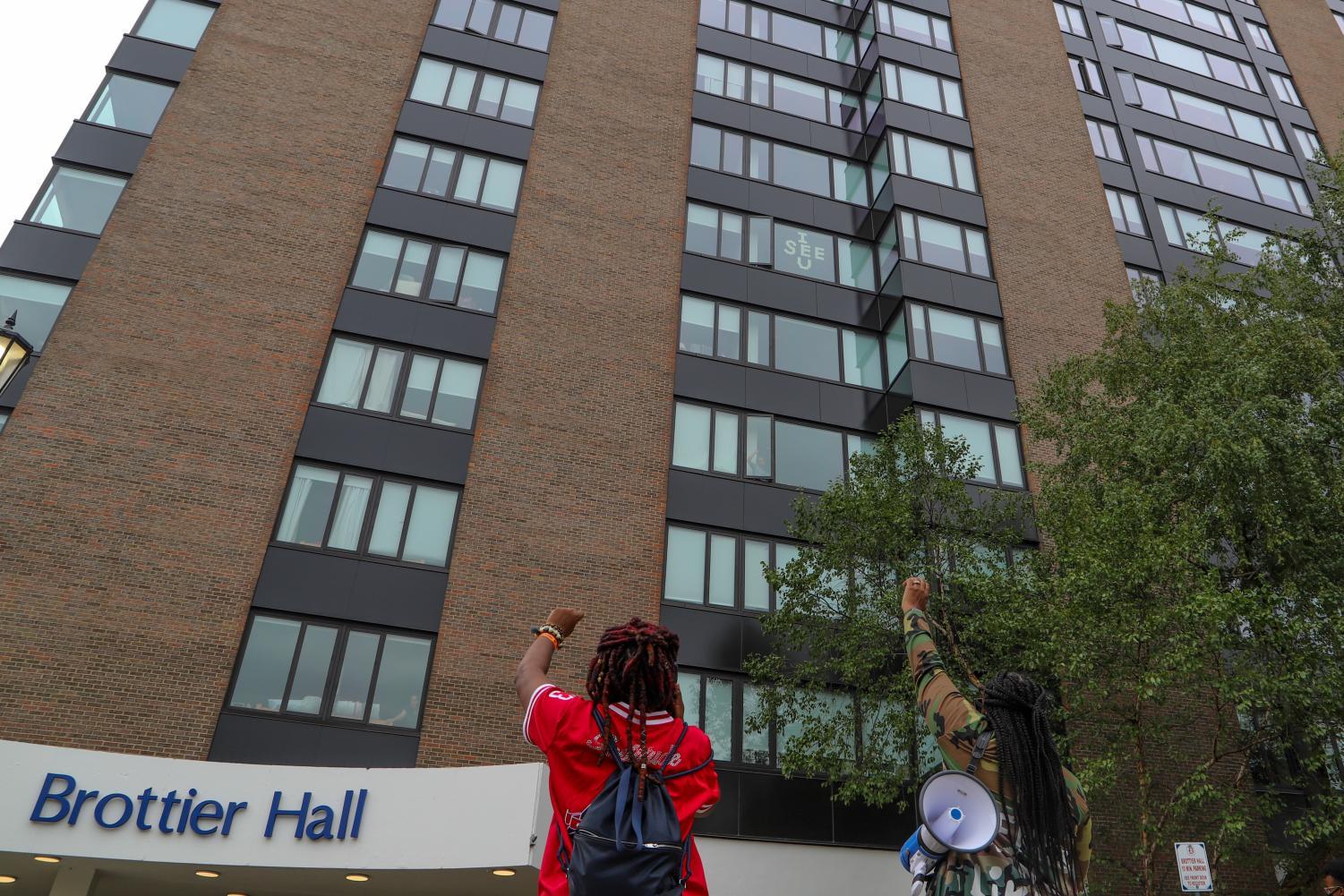 Brown said after the incident that it is best to simply ignore “agitators.”

“Don’t let people push your buttons,” Brown said. “How effective would it have been to not pay them any attention?”

Mia Sterbini, a senior acting major at Point Park University, helped organize Friday’s event. Sterbini, who has been organizing with Brown since she started protesting, said Duquesne’s response to Brown is a failure.

“All she really wants is answers for her son and Duquesne has been so difficult and barred her from any real progress,” Sterbini said. “It goes to show how wrapped up [Duquesne] is in their own publicity and image that they won’t even come talk to a grieving mother.”

Sterbini added that she will not stop organizing until Brown gets answers.

“We’re gonna be out here till the very end,” Sterbini said. “We want the lies to end. It’s been incredibly painful and terrible to watch the way they’ve ostracized this mother, who’s grieving the loss of her son, which was completely preventable and is completely on Duquesne’s hands.” 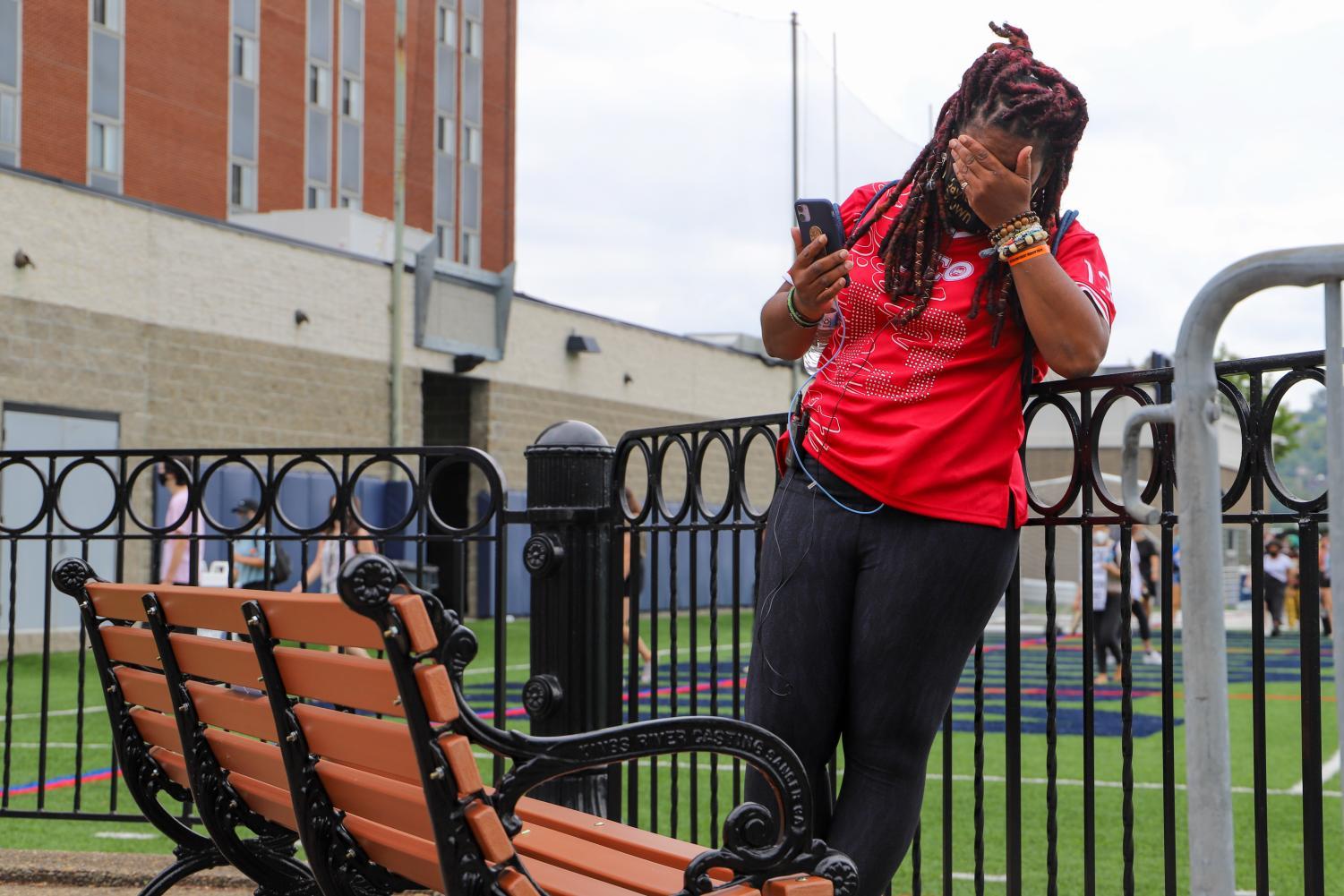 While a large chunk of the march was spent at Duquesne, Brown had criticisms for Pitt as well. She commended Pitt for taking some action toward furthering racial justice on campus, such as Pitt police reforms and increasing mental health services for Black students. Brown said she wishes Pitt would give her more credit for coming up with many of the ideas.

“They updated their website, they need to give me credit for that. They need to, at the very least, say thank you so we can let other schools know,” Brown said. “We need to let them know that because they’re doing pioneering work, give this mother her just due. I’m starving 70 days and to not get a thank you is really disheartening.”

The Black Action Society and 17 other Black student organizations sent a list of more than 20 wide-ranging demands to the administration in late June. Pitt released its Anti-racism, Diversity and Inclusion Action Plan in mid-July.

This plan incorporated many of the Black student organizations’ demands, even though officials said it wasn’t a formal response to the list. Some of the changes put in place include hiring more Black clinicians at the University Counseling Center, scheduling periodical meetings between senior administrators and Black student leaders, establishing anti-racism training for employees and reforming policies within campus security and Pitt police. 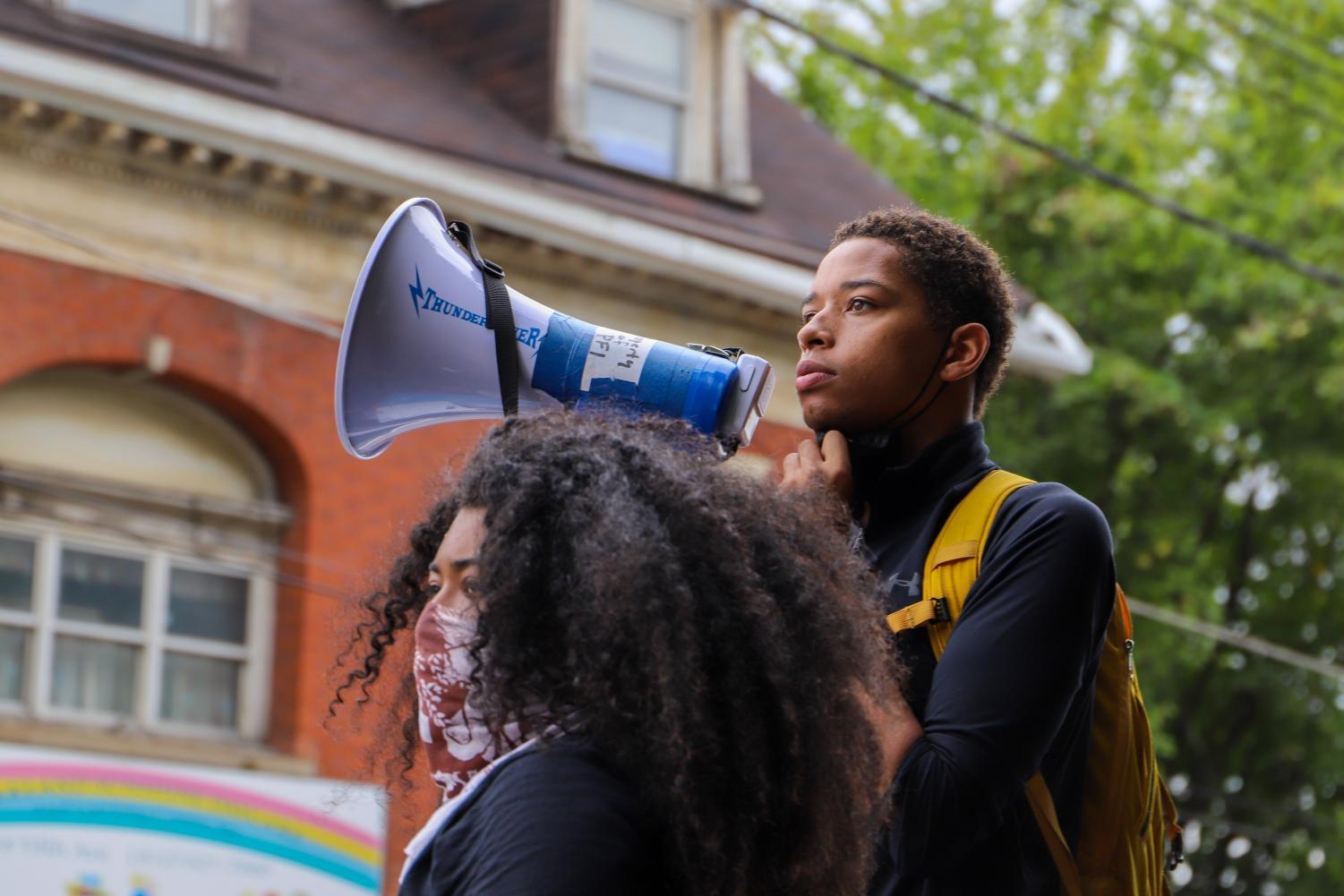 Brown said even though Pitt didn’t give her credit for its actions, she still has “unconditional love” for Pitt students, even those who didn’t participate in the march. She encouraged students to pressure Pitt’s administration to give her more credit and to invite her to speak on campus.

“I want students to let the school know to show and practice a little more humbleness and sensitivity and honor and recognize the work that Mama Brown is doing to protect us,” Brown said. “Invite me to the classroom, I’ll come.”

Melchizedek said she hopes more Pitt students and administrators will show up to support Brown in the future.

“It is really heartbreaking to see that there aren’t more people here. Institutions saying, ‘Oh yes we stand, we stand,’ not one representative from the school, not one,” Melchizedek said. “To me, we have to get our voices heard sometime and I’m loud.”

Melchizedek added that she sees a problem with schools, including Pitt and Duquesne, profiting off football players, but not doing enough to protect their lives.

“It was a football player that passed away and these institutions thrive off the backs of our athletes and especially the football teams,” Melchizedek said. “Alumni gives money for football, but when someone dies no respect is given to that life.”

Melchizedek wasn’t the only student who thought Pitt could do more to further racial equity on campus. Isabella Mahal, a Pitt sophomore political science major who attended the march, said she hopes Pitt takes comprehensive steps to protect Black students. She also said Pitt should reconsider many of the original demands from the BAS that it didn’t initially accept over the summer. 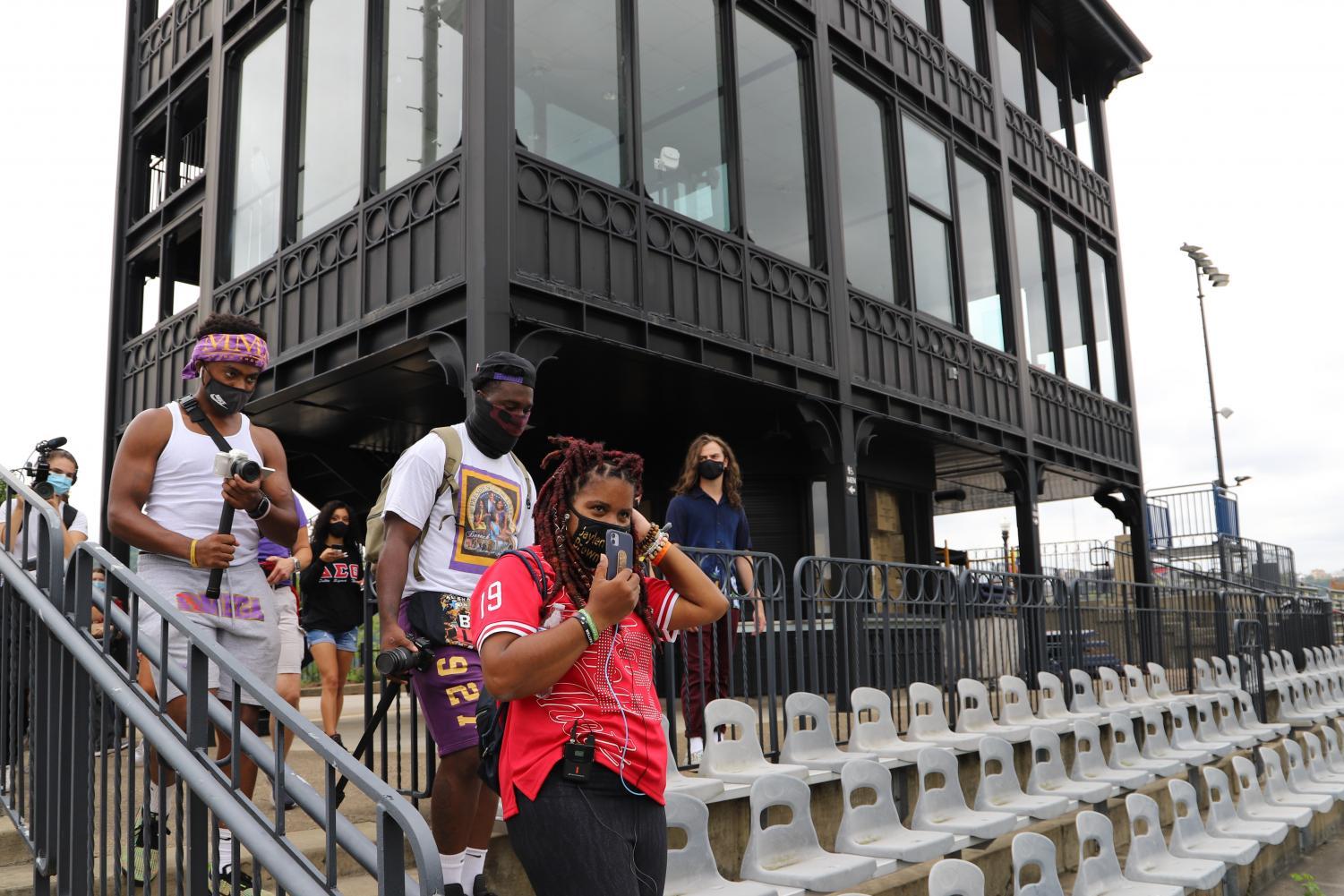 “What’s important is moving beyond making statements and then writing it off as, ‘Oh we did our activism for the day or for the week or the year,’” Mahal said. “That’s where the frustration arises, when the University claims to support Black lives and does nothing to change their behavior.”

Sterbini said Duquesne’s response to Brown is part of the larger issue of racism in America. She said while the Black Lives Matter movement has made progress, there is still much to accomplish.

“This is truly just the beginning. I just want to remind especially young people that this is our fight and this is what our lives are going to look like,” Sterbini said. “We have a responsibility to help each other as a community. It’s going to be our world.”