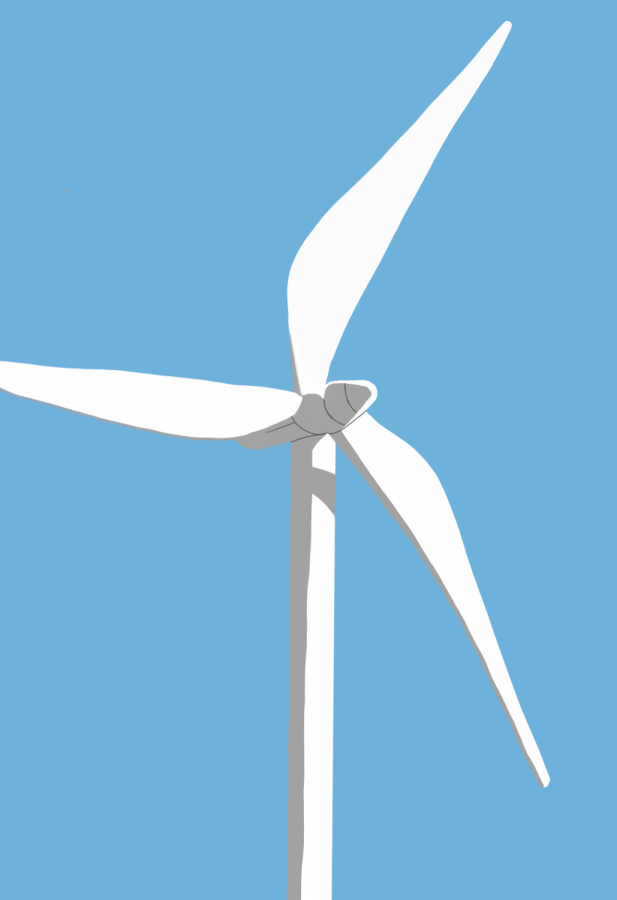 Climate change is at the center of everyone’s attention nowadays, with California’s sky burning orange. One solution is dominating the conversation of fixing our planet’s climate — green energy. Green energy means to transition away from fossil fuels and rely on cleaner ways of generating energy without releasing greenhouse gases into the air. Solar and wind energy seem to be pioneering the green energy effort, but how green are they really?

We all know fossil fuels are bad. If you lived in Pittsburgh even 20 or 30 years ago, you’ll remember that the buildings were black with soot — steel mills and coke works burned coal and belched the smoke into the air. The lungs of our nation’s industrial cities are still choking on carbon dioxide. Pittsburgh has the eighth worst air particle pollution in the nation with asthma rates nearly three times the national average, and Allegheny county is in the top 2% of all U.S. counties at risk of cancer.

Many alternatives to fossil fuels have been tested and researched. One example is biofuel — the mass deforestation and burning of trees for electricity. The flaw here is evident — beyond cutting down one of our best defenses against a warming planet, it still releases an astronomical amount of carbon dioxide into the air.

Our more popular solutions may not be as green, sustainable or renewable as we might have hoped, either. Solar panels and windmills dominate the clean energy scene and are actually doing much more harm to the environment than we might think. Green energy is not the solution to climate change, and it never was. It does not have the strength to ever completely replace fossil fuels, but nuclear energy does.

As of 2019, 65% of Germany’s energy was powered by renewable energy sources, and 48% of that came from wind turbines. Each wind turbine requires about 230 tons of steel, and steel-making requires a very large amount of coal. As of numbers from 2016, if the world were to have 25% of its power come completely from wind turbines, we would need 450 million metric tons of steel and the fossil fuel equivalent of 600 million metric tons of coal. Moreover, all of the electricity that wind turbines produce is intermittent, while its production, installation and maintenance all rely heavily on fossil fuels.

Solar panels also have a significant carbon footprint. Most solar panels made today are made from quartz, which has to be mined before going through an extensive heating process fueled by coal, then turned into a purer form called polysilicon. This generates up to 4 tons of tetrachloride waste for every 1 ton of polysilicon produced. Tetrachloride is a toxic chemical that when introduced to water can create hydrochloric acid, which is extremely dangerous to both humans and the environment. The inclusion of extremely toxic chemicals is found in almost every step of the production process of solar panels.

Today, nearly half of the world photovoltaics are made in China, which has looser laws on the protection of its workers and the environment. The Silicon Valley Toxics Coalition has been tracking the environmental impacts of the industry since 1982. While it was created to have more transparency in the production industry, it seems to have done the opposite, as it allows companies to self report the amounts of toxins and waste that are expelled. According to the coalition, the amount of companies willing to provide these numbers has been declining, especially among generic brand companies from China. A study released in 2014 by Northwestern University and Argonne National Laboratory found that the carbon footprint of a solar panel made in China is twice that of one made in Europe, due to looser environmental restrictions and more coal-fired power plants.

So what is the answer? Do we have any hope for saving our planet while still being able to continue our electricity-powered lives? It seems that the solution is nuclear, the only type of energy with an entirely containable emission. Solar farms require about 17 times more material than nuclear plants do, and nuclear produces four times less carbon emissions than solar panels do. The shift from matter-dense and intermittent fuels, such as fossil fuels, solar and wind, to an energy-dense fuel such as nuclear is what our climate needs to heal, coupled with less consumption. In the long run, it is much cheaper, uses less resources and expels less waste into the environment.

The issue of intermittence seems to constantly come up when dealing with “green” energy — the sun doesn’t always shine and the wind doesn’t always blow. This means that for solar panels and wind turbines to work optimally, they need to be installed en masse, all together in one place as solar and wind farms. This is the most effective way for us to create renewable energy. But while these energy farms may help the climate, they are not so helpful to our environment, as they cause habitat fragmentation, displacement and destruction.

Deserts, a very necessary biome in our biosphere, are often used for solar farms. Plants and animals are no longer able to inhabit the area and are forced to move or die. Ivanpah, one of California’s biggest solar farms, takes 450 times more land than California’s last nuclear plant, Diablo Canyon, to produce the same amount of energy. Michael Shellenberger, an American author and environmental activist, put it best — “In an effort to try to save the climate, are we destroying our environment?”

The most shocking part of this all is the physics. These “green energy solutions” that we’re being sold do not actually have the energy to be able to ever completely replace fossil fuels. The physics boundary for silicon photovoltaic panels, the Shockley-Queisser Limit, is a maximum conversion of 34% of photons into electrons. The best commercial technology today exceeds 26%. Wind power technology also has flaws in physics. The boundary for a wind turbine, the Betz Limit, is a maximum capture of 60% of kinetic energy in moving air. Commercial turbines today exceed 40%. But nuclear power ends up being more reliable when it comes to generating power consistently and generating enough of it to be able to completely and efficiently replace fossil fuels while reducing our energy footprint.

We have been living in a world that hasn’t put the climate or environment first in hundreds of years. Our science needs to go toward clean energy that is actually clean, not just branded as such for profit. Soon enough, deserts will be covered in solar panels instead of cacti and tops of mountains with wind turbines instead of trees. We need change now that is effective almost immediately, not plans to switch to green energy by 2030, which is too late.