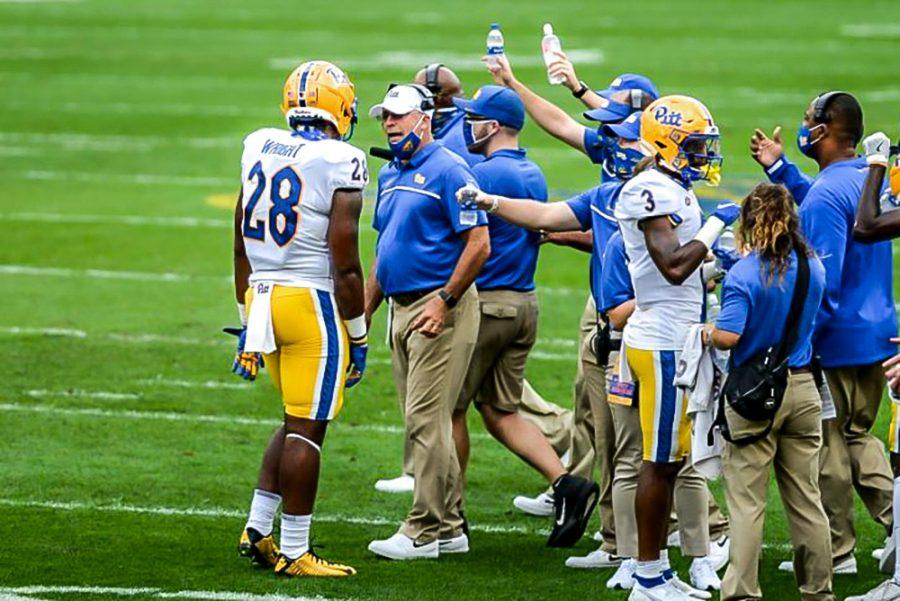 When he took the podium for his weekly press conference Monday, two days after routing Austin Peay 55-0 to open the season, football still didn’t receive all the spotlight. Reporters asked multiple questions about the team’s safety precautions after seven Panthers missed Saturday’s game due to COVID-19 protocols.

Narduzzi, who said on Saturday he doesn’t talk about injuries, wouldn’t reveal much information on the subject. He said the players who tested positive must quarantine for 10 days after the day they were tested, but he wouldn’t reveal when the seven players tested positive — or if they’d be available for Saturday’s matchup against Syracuse.

But he did express his confidence in the team’s protocols to keep the players and staff safe.

“I feel safe as I can be in this building and with the people that I’m surrounding myself with,” Narduzzi said. “I trust our players when they walk down the hallway are doing the right things, when us old people are walking through the facility.”

Another pregame observation came up in Monday’s press conference, as well — neither Pitt or Austin Peay took the field before the playing of the national anthem on Saturday. Narduzzi said it was an easy decision because the game was played in an empty stadium.

“We talked about it as a leadership council, but there’s no fans out there,” Narduzzi said. “I don’t even think they’re going to play a national anthem. There’s nobody there … It was just kind of a team deal. It was kind of common sense that there was nothing to do out there.”

Narduzzi said that coming out of the tunnel to an empty Heinz Field felt different, expecting to see the band, cheerleaders and dance team forming a lane onto the field.

He said the team quickly settled into the unusual environment and emphasized the need for the team to create its own energy. He pointed to redshirt junior Paris Ford’s enthusiasm as a model for the rest of the roster.

“I think there’s some guys out there that will be contagious,” Narduzzi said. “If the offense or defense does something big, we want to get everybody like Paris. He’s that energy that is contagious. We want everybody to catch that.”

Pitt dominated Austin Peay the entire first half, leading both teams to reach an agreement to shorten the second half with the Panthers leading 42-0 at the break. Pitt cycled through five running backs against the Governor defense — all played well, but none separated themselves from the rest statistically.

Sophomore Vincent Davis, who tallied 43 yards and two touchdowns on 11 rushes, impressed Narduzzi the most with his pristine elusiveness.

“There were blocks being made, they’re not going to be held forever,” Narduzzi said. “You got to make people miss. That was one thing I saw Vince do, which we saw him do it last year. He’s a good back.”

Pitt’s star-studded defensive line, who held Austin Peay to just three total rushing yards, will have a prime matchup against a weak Syracuse offensive line to continue their hot start. The Panthers sacked the Orange nine times last year, adding 12 tackles for loss. Narduzzi warned his team, though, that their opponent will have faced tougher competition already after playing a top-25 ranked North Carolina team Week 1.

“I think to their advantage, they’ve been in a war already,” Narduzzi said. “They were in a war for three quarters. They’re probably better prepared for Saturday than we are at noon.”