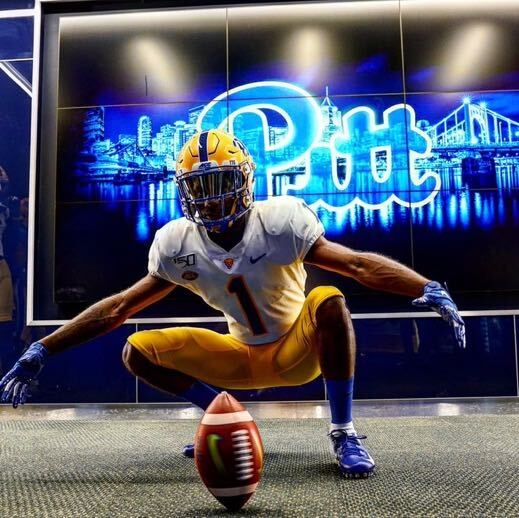 Ocean Lakes wide receiver Myles Alston became the newest addition to Pitt’s 2021 recruiting class when he tweeted his commitment in April. He’s one of three prospects from Virginia currently locked in to play for Pitt next year, joined by running backs Rodney Hammond and Malik Newton.

Rated as a three-star recruit by Rivals, and No. 18 prospect in the state, the 6-foot-1 175-pound wide receiver from Virginia Beach chose Pitt over his other final six choices — Virginia, Virginia Tech, Ole Miss, Maryland, Liberty and Appalachian State.

Although offers from strong local programs such as Virginia and Virginia Tech drew his interest, Pitt made the most sense to Alston because of the effort it spent recruiting him. The Panthers’ pursuits made him feel like they valued his talents more than others.

“The way that I looked at the recruiting process, I wanted a school that recruited me like an artist that made me feel like I belong there,” Alston said. “Pittsburgh stood out. They made me feel like I was home. They definitely pushed harder than any other school did.”

Beatty — a fellow Virginia native — made his way up the Virginia high school prep ranks early in his coaching career, ultimately being named the Virginia 3A Coach of the Year after winning the 2004 state championship. His reputation in the state has helped Pitt establish a recruiting pipeline in Virginia, especially with wideouts like Alston.

“I have personal connections [at Pitt]. Coach Beatty, he’s from my area,” Alston said. “I’ve known him since I was 14 so we already had a relationship.”

Alston earned scholarship offers from four ACC schools in large part thanks to his versatility and athleticism. Listed at the “athlete” position by 247Sports, he presented the opportunity for teams to use him at multiple positions.

“I feel like versatility and being able to play in all three receiver spots, whether it’s the outsides or in the slot. I can play wherever,” Alston said. “Just being that guy with the magnetic energy. I’m bringing everybody together, playing my hardest, making my teammates better and getting better. I feel like I bring that to the table.”

Making visits to Pitt throughout his recruitment, Alston enjoyed the fast-paced excitement of being in the City. He said he needed to attend a college where he could thrive on and off the football field. Pitt fulfilled these requirements due to its campus life and academics, as he is considering studying kinesiology.

“I like that it’s not in the middle of nowhere,” Alston said. “At Pittsburgh, I feel like it’s a good spot. I feel like I could see myself starting a life there, being a student in Pittsburgh without football.”

After the Virginia High School League decided to postpone high school football this fall, Alston made the tough decision to forgo his senior season of football. Instead, he’ll spend that time preparing to play at the college level and even plans to get a head start academically by enrolling at Pitt in January.

“It was a shocker at first. Me and all my other senior friends were all disappointed that we weren’t going to have a senior season,” Alston said. “I just made the best of it and took the time to prepare for Pittsburgh and get ready for college.”

Looking ahead at his future in Pittsburgh, Alston has set goals to strive for both on and off the field.

“Of course I want to win. I’m sure everyone shares that motive on Pittsburgh,” Alston said. “Personally, I want to get better. I want to become a better person outside of football, better student and ultimately a better athlete just to elevate my game as much as I can and embrace every moment.”

Alston can’t wait to get on the field donning blue and gold, but there’s one ACC matchup in particular he’s circled for the future.

“I hope UNC gets on the schedule when I’m up there,” Alston said. “One of my friends from my city, he’s at UNC now. I’m most looking forward to playing against him.”