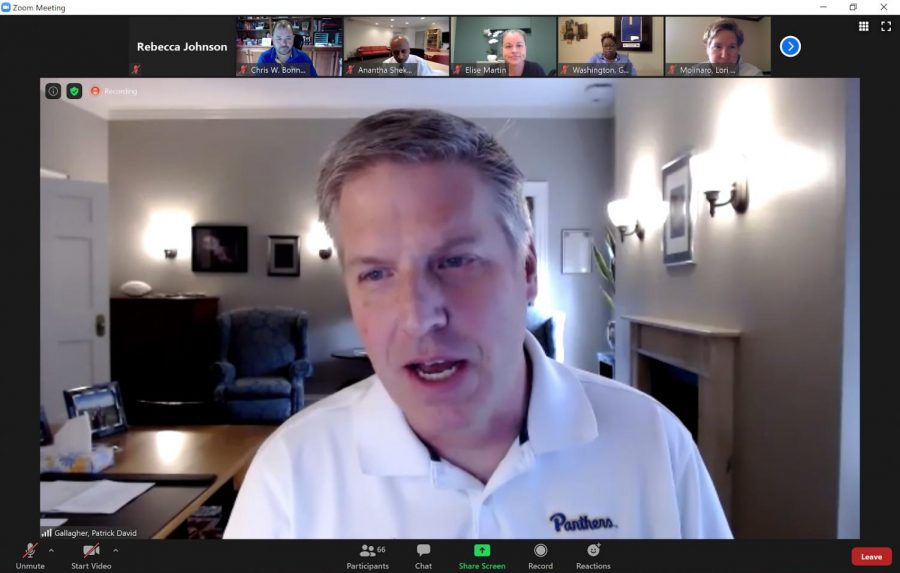 Chancellor Patrick Gallagher said Thursday that it’s likely that next semester’s schedule will be compressed similarly to the fall so there aren’t vacations where people leave and come back to campus.

Chancellor Patrick Gallagher said Thursday that he expects the [email protected] model to continue into the spring semester due to the ongoing COVID-19 pandemic. He also said it’s likely that next semester’s schedule will be compressed similar to the fall so there aren’t vacations where people leave and come back to campus.

Gallagher and other University leaders discussed Pitt’s future plans in response to the COVID-19 pandemic as well as current statistics surrounding the virus and budget outlook, at Thursday afternoon’s Senate Council meeting.

This announcement comes in the wake of Pitt adding 22 new COVID-19 cases between last Friday and Monday continuing an upward trend in reported cases, though less than in previous case reports. Five of the last seven days have seen double-digit increases in student cases, according to data reported by Pitt.

Pitt has been using the new [email protected] teaching model, which allows students to attend classes “in person, remotely, synchronously or asynchronously.” The fall semester began early on Aug. 19 with online-only classes and classes will end on Nov. 20 for Thanksgiving break. Students will not return to campus after Thanksgiving, instead finishing classes remotely through the end of the fall semester on Dec. 5.

At the meeting, Elise Martin, a member of the COVID-19 Medical Response Office, clarified many of Pitt’s current COVID-19 case statistics. She said around 98% of infected students are undergraduates, and only 10% are first-year students. She also said about 80% of positive cases are among off-campus students.

Martin also said numbers for the next case report — which will be released tomorrow — look “encouraging” and do not include a “significant” increase in COVID-19 case numbers as of today.

“We’re pleased that we’re starting to flatten that curve, which is really where we need to be to have a successful semester,” Martin said.

But when Tuesday’s case report was released, Pitt’s COVID-19 Medical Response Office said the number of positive cases “remains higher than they would like.”

“While no new positive cases were reported on Sunday and Monday of this week, the positive case count on the Pittsburgh campus remains higher than we would like,” the office said. “We need to bring this number down, and we can, through continued mitigation efforts such as practicing physical distancing and wearing face coverings. If we do not continue to engage in safe behaviors, the virus will continue to spread and disrupt our lives.”

Martin added that the COVID-19 Medical Response Office has not found that in-person classes are a “significant source of transmission.”  She also said Pitt would continue its surveillance testing program with the goal of testing about 10% of the student body every month.

Pitt began moving classes in-person on Monday. Provost Ann Cudd announced last week that faculty members can apply to teach their classes in-person if there is a “definable benefit” to in-person instruction, and if an instructor’s dean or regional campus president approves teaching plans.

Gallagher also announced that the strategic Plan for Pitt 2025 will not be finalized until the next academic year to incorporate Pitt’s response to the COVID-19 pandemic, racial and social justice initiatives and environmental concerns. Gallagher said in June following George Floyd’s killing that it would be put on hold indefinitely to include strategies to increase racial equity on campus.

Gallagher also reported on the University’s current budget outlook. He said the situation is still “volatile” with concerns over future state funding, but the worst case scenario didn’t happen. The General Assembly passed a flat funding bill for the University in May, providing some budget surety for Pitt, and Gallagher said enrollment rates remained relatively steady.

“The best case scenario is still a money loser for the University. This wasn’t a difference between being in the black or in the red,” Gallagher said. “We were always going to be in the red, the question is how deep.”