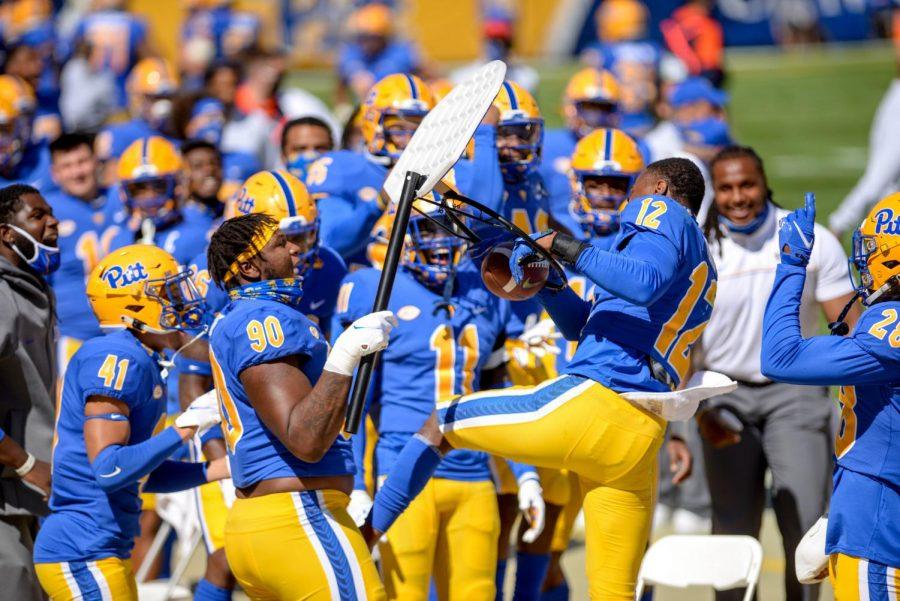 Paris Ford celebrates after making an interception in the third quarter of Saturday's game against Syracuse.

Pitt announced 45 minutes before kickoff that three players would not be in attendance due to COVID-19 protocols, a decrease from the seven players absent last week.

Pitt redshirt senior wide receiver Taysir Mack, who missed the season opener with an undisclosed injury, once again did not suit up. Redshirt senior tight end Lucas Krull, who sat out against Austin Peay after transferring from Florida in the offseason, made his first appearance in a Panther uniform Saturday. Krull dropped two of his targets, but did draw a passing interference on a fourth-down play to keep a possession alive.

For the second week in a row, neither team took the field for the national anthem at Heinz Field.

Although the Panthers defense came out strong to get a stop on the first possession, the team showed a lack of organization and discipline with three penalties in the first five minutes of the game. An offsides penalty gave the Orange a second attempt at a third down conversion, and the Panthers committed back-to-back illegal formation mishaps, the second negating a solid punt to give Syracuse a good field position for their second possession. The Panthers ranked near the bottom of the conference in penalties last year, costing them over 66 yards per game.

“We just got to clean them up and again go from week two to week three and clean that stuff up,” head coach Pat Narduzzi said. “We should have zero pre-snap penalties. Zero.”

Pitt thwarted the Orange’s offensive opportunity, with redshirt first-year defensive lineman Calijah Kancey coming up with the first sack of his career on third down. Pitt gave it right back just a few plays later, as quarterback Kenny Pickett’s backward pass was dropped by sophomore running back Vincent Davis and recovered by a mob of Orange defenders in the Panther red zone. But Syracuse couldn’t punch the ball in the endzone, and the Pitt defense held them to a field goal for the game’s first points.

Pitt finally got the ball moving on their third offensive possession, started by two productive runs from redshirt first-year running back Daniel Carter. Pickett connected with a streaking Jordan Addison near the sideline for a 27-yard touchdown that put the Panthers back in the front. The first-year wideout Addison had emerged as one of Pickett’s favorite targets in the season opener with seven catches, more than three times the total of any other Pitt receiver.

Weaver made his presence felt in the ensuing Syracuse possession. The 6-foot-5 pass rusher got to the quarterback on back-to-back plays to force the Orange’s third punt of the first quarter. Weaver, who finished with a team-high seven tackles, two sacks and three tackles for loss, said he couldn’t wait for his first appearance in over a year.

“I felt like a little kid on Christmas,” Weaver said. “Last night, I was sitting with my eyes closed for like 30 minutes trying to fall asleep and I couldn’t. I finally fell asleep and woke up at like 3:40 in the morning energized, checking my phone, hoping it was 7 o’clock. I was very eager. I tried to control it as best I could, but I couldn’t.”

It wasn’t Orange quarterback Tommy DeVito’s first time facing the Panthers’ tenacious defensive line — the Panthers came up with nine sacks in the 2019 win at Syracuse.

Pitt got a nice gain on a wildcat direct snap play to redshirt junior running back Todd Sibley Jr. to open the second quarter, but failed to convert the drive into points. Redshirt senior kicker Alex Kessman missed the 37-yard field goal attempt, making him 0-2 to start the year.

After a hard hit on the Panthers’ fourth sack of the first half, Syracuse quarterback Rex Culpepper came in to replace DeVito. Culpepper got off to an immaculate start, throwing a 69-yard touchdown bomb to junior wideout Taj Harris to put Syracuse ahead 10-7 early in the second quarter.

“We knew as soon as it happened that we were gonna clean up and that it wasn’t gonna happen again,” senior captain cornerback Damar Hamlin said. “We’ll correct it in practice and we’ll do better next week.”

The Panthers needed a response, and they got one. Pickett converted a third-and-long with an impressive scramble to extend the play and toss it to Addison to put the Panthers in the scoring territory, and Pickett fell into the end zone on a quarterback sneak a few plays later.

The Panther offense advanced the ball up the field their next possession as well, aided by passing interference and roughing the passer penalties from the Orange. A Syracuse sack moved the Panthers back, setting up a 46-yard field goal attempt as the clock expired. A dropped snap blew up the play, and the 21-point favorite Panthers headed into the half up 14-10.

After the Pitt offense went three-and-out to start the second half, the Orange put DeVito back in under center. He didn’t get much more help from his offensive line, as Weaver sacked him on fourth down to give the Panthers the ball back at midfield.

But the sloppy offensive play continued. Syracuse linebacker Mikel Jones stepped in front of Pickett’s pass for the Orange’s second takeaway of the day — Pickett’s first interception of his senior season. The Pitt defense answered right back with an interception on a Syracuse screen pass, preseason All-American safety Paris Ford’s second in two games.

Ford’s interception provided the spark the Panthers desperately needed. Pitt sophomore wide receiver Jared Wayne caught his first three passes of the season on the ensuing possession, culminating in a 17-yard touchdown grab on a slant route to put the Panthers up 21-10 late in the third quarter.

“Getting Jared involved was big,” Pickett said. “He’s another guy that reminds me of Jordan. Those two guys resemble each other a lot with how they go about their business. Two pros that are both young players.”

A strip sack gave the Panthers the ball in Syracuse territory early in the fourth quarter with a chance to put the game away. A three-and-out, followed by Kessman missing the 45-yard field goal, gave the Orange the ball back without any damage inflicted.

The Panther defense continued their second half shutout, finishing up the 21-10 win. Syracuse oddly chose not to use any of their three timeouts, instead allowing the Pitt offense to run out the last 4:16 on the game clock.

The Panthers doubled the Orange’s offensive production — 342 yards to 171. The Orange only recorded 1 yard of offense in the fourth quarter.

“We just keep our mentality,” Hamlin said. “I’m actually proud of us today. We handled a lot of situations with bad field position and things like that, just kept it rolling.”